Once she escaped to the islands of Tahiti, Fathom contributor Marguerite Richards took in the sites, the stories, and the sway of the palm trees.

Tahitians are metaphoric when it comes to describing the emotions and events in their lives. Storytelling is the channel through which people explain their lust, angst, anxieties, and pain. The legends don’t often have happy endings, but there is beauty, humor, and sweet absurdity that helps explain the relationships between people and nature. Hopeless romantic that I am, I wanted to hear a real love legend, so I asked friends of friends to introduce me to an elder steeped in the old oral tradition. 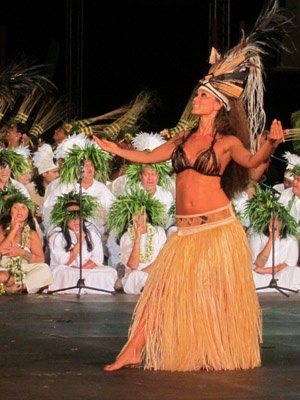 My request led me to Tahitian mama Betty Taputuarai, an active storyteller and cultural preservationist in her native community, Mahina. Among her triumphs: being awarded the grand prize at the 1976 Heiva cultural festival for directing and choreographing the Tamari'i Mahina dancers in a reenactment of the legend of No Hea Mai. Spoiler alert: The ending involves tears of unrequited love.

The Legend of No Hea Mai

Betty Taputuarai brought me to the lighthouse on Point Venus, the promontory at the eastern end the Bay of Matavai, the very spot where it is said the legend was born. Under the shade of the lighthouse, wind blowing our skirts and the palms above, she told her love legend: The Legend of No Hea Mai, or Water That Comes From the Eyes, is the story of a prince that was ashamed of his bald, egg-shaped head. He was in love with a beautiful Tahitian dancer in Tehoho, who he would visit at night in the darkness, afraid she’d be scared away by his homeliness. In his desperation, he sought advice from a wise old sage who told him to bathe in monoï and sandalwood and then look at himself in the river. He did, and to his surprise, he had become handsome.

When he approached his beloved’s home again in the daylight, she didn’t reveal herself, and he was so terribly disappointed, he fled. The next day, he threw a lasso towards Hawaii, which caught onto the Mauna Kea volcano and, with the rope tied around his waist, he allowed himself to drift to this faraway island. By the time the beautiful dancer realized what had happened, she rushed after him, but it was too late. He had gone too far. She cried so much and for so long that her many, many tears carved out the Bay of Matavai. 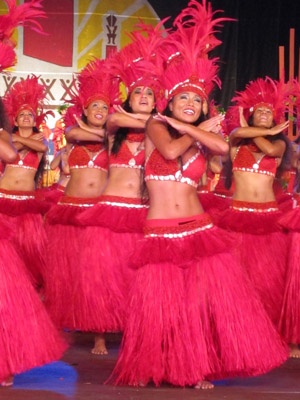 Mama Taputuarai also told her family's own sad love story, which left an important imprint on the generations. It was a story of forbidden love between Arthur Fritch, an American man born of German settlers, and Tetuaveroa Amaru, a Polynesian dancer. Despite their love and the five children they had together, their families never fully accepted them or each other.

Disputes seemed endless until Arthur was called into military service in the United States. Once he was gone, his mother chased Tetuaveroa out of the house, forcing her to leave three children behind in Tahiti and go back to her native island of Moorea.

Much heartache ensued for Tetuaveroa, who was devastated to be split up with her children. She was also pregnant with Betty at the time.

While the lovers did not see a happy ending, the family eventually did. The children and grandchildren on both sides have become great friends, and the German relatives (who now live in the U.S.) have rescinded their heritage of the Tahitian land to return it to the local family members, to whom they believe it rightfully belongs. With this, 83-year-old Betty Taputuarai found peace in her family’s history.

Storytelling creates meaning for otherwise unexplainable things that happen in our lives. In contrast to the way Western culture seeks psychological study of human behavior to explain hard times, Polynesians seem to find the answers in their surroundings, from the great ocean to the protective mountains on their horizon. Nature is what guides them, separates them, and ties them to home.