The New Craftsmen is an amazing new boutique in London that celebrates the best in British craftsmanship. In addition to selling a curated collection of products for the home, it is a creative workshop where makers can meet shoppers. Fathom's Pavia Rosati met co-founder Natalie Melton when she visited the shop shortly after it opened in June. This interview is condensed from a long Skype chat they had about craft, the shop, and the serendipity of meeting interesting people over lunch.

The New Craftsmen is all about provenance and history and the story behind the craft. Let's talk about yours — how did the shop come about?
There are three of us. Mark Henderson has had a career in British luxury brands and is currently chair of Gieves and Hawkes, one of the foremost bespoke tailors in the country. He's also a trustee of QEST, the Queen Elizabeth Scholarship Trust, which supports craftsmen to help further their learning. We met because he is on the board of Walpole, which represents the interests of British luxury brands. At the time I was working for Arts & Business, a broker and advisor for companies that support the arts. We established Crafted, a mentoring program for artisans that connected craftsmen with people who understand the luxury business and its customers. All luxury business is rooted in craftsmanship. I helped set up the program; Mark was a mentor.

I met Catherine Lock at a talk I gave. She was working in product development and trend forecasting for companies on the High Street, like Habitat and John Lewis. She had spent a lot of time overseas developing products, but knew little about the indigenous craft skills we had left in the UK.

So she left her job and went on a road trip around Britain, meeting people who made things, understanding what was still out there. Everything from workshops left over from the Sheffield steel industry to basket makers in Orkney. Some of these artisans can barely make a living, even though they have an extraordinary knowledge and expertise in crafts that may be dying out. It would be such a shame to lose the skills that are so much a part of our cultural heritage.

When Catherine was trying to work out what to do with this knowledge she had acquired, I introduced her to Mark. They began talking about what they might do to help sell the work of all these extraordinary makers we were all working with in different ways. Nine months later, I left my job and joined them drinking coffee and tea around London, making plans. 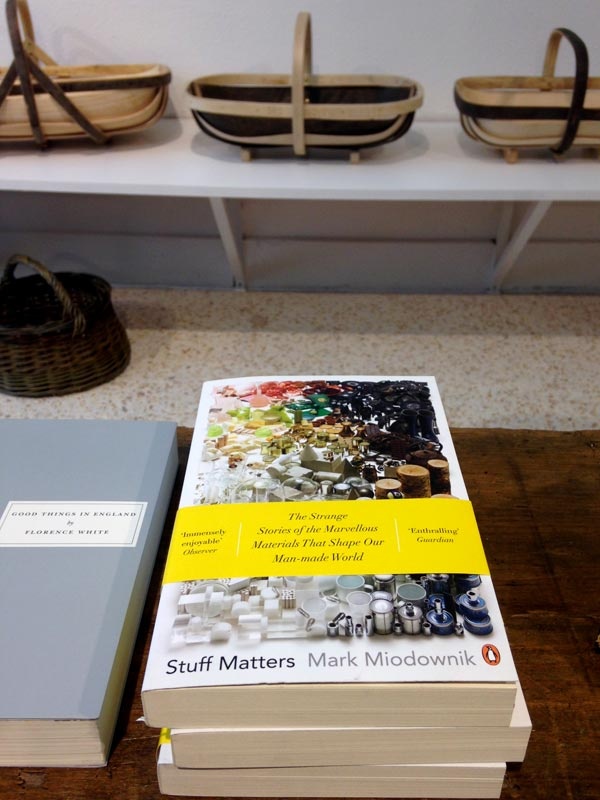 The book's title nicely sums up the shop philosophy.

And now you're here.
And now we're here, representing and selling the work of fine British craftsmakers. We set up a location where people can understand that beautiful craft has a value that we should be celebrating and rewarding.

We're building a network of people with exceptional skills, hopefully encouraging people to appreciate, invest in, and purchase really beautiful pieces. We provide the platform and the environment that brings the right customers through the door. This allows the makers to do what they are good at — making. We work with some people whose businesses are close to folding, even though they are virtually the last people in the country who do what they do. The man who does the straw work from Orkney has been able to take on an apprentice who can hopefully carry on the craft for another generation. This is really important to us.

We're 18 months down from when we first opened our doors. I almost can't believe we made it all happen.

You had two pop-ups before setting up the permanent home.
Our first pop-up was on Carlos Place opposite the Connaught Hotel. We had two floors of a four-story townhouse: one showcased the craft-making process, another was the shop. It lasted 17 days around Christmas. The second pop-up lasted from June through Christmas in a Victorian stable at the back of the Connaught, a very specific and atmospheric location with Victorian tiles, brickwork on the floors, and no natural light. Grovesnor, a principal landowner in Mayfair, have always been very supportive of us and our project. That our first location was at bottom of Mount Street, the hottest location in London retail, couldn't have been a more auspicious start for a business that at the time was no more than an idea. 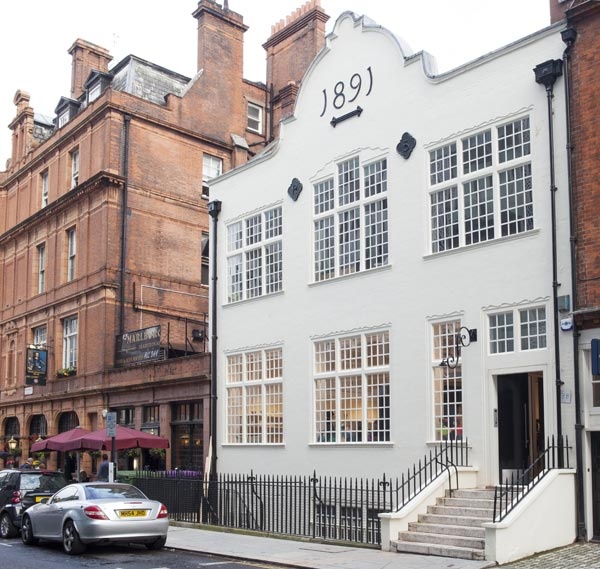 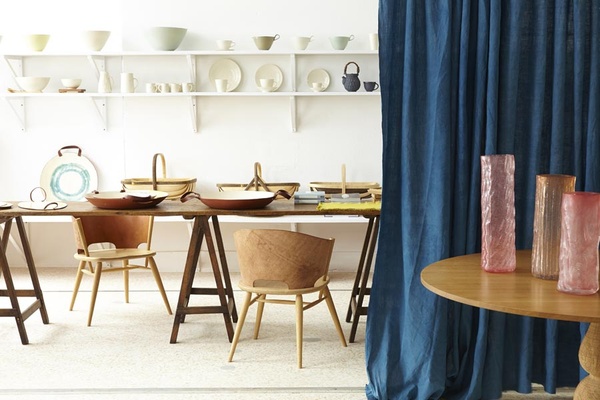 Shop photos, outside and in, courtesy of The New Craftsmen.

And your current space?
It was built as a workshop for breeches makers in 1893. We've tried to strip it back as close to the original state as we can to give it a rawness, which you can see in the brick work and the amazing skylights. We're less than 100 yards from Oxford Street, yet it's quiet, calm, and peaceful. The space is a bit of a sanctuary, and that's part of the appeal that we sell. People respond to things that are handmade. They take a moment to appreciate them. We want the space to reflect that.

You carry a great range of products, from tableware and wooden rocking horses to scissors and jewelry. Tell me about the collection.
The emphasis is on interiors, housewares, and gifts, like jewelry and leather goods. It's principally things for the home and things you can use. Craft that has function, rather than just being pretty to look at. 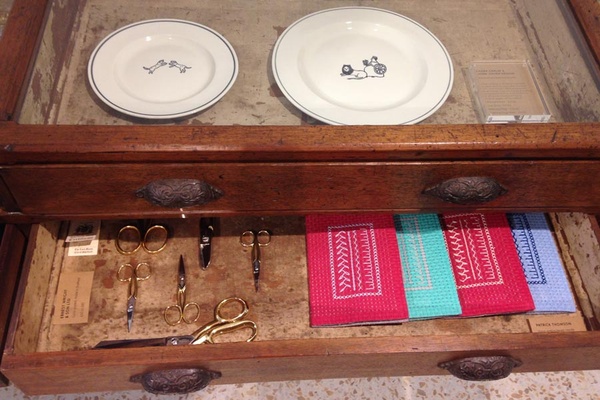 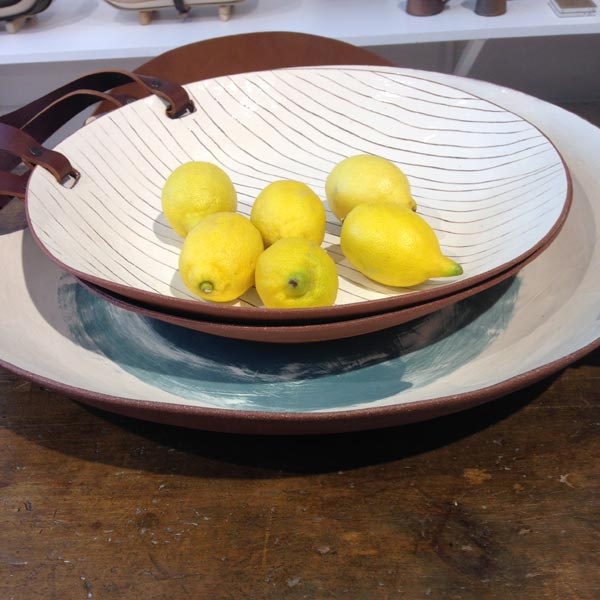 Are you working with artisans who have a long tradition in the business or more with startups?
We have a number of businesses that are third, fourth, fifth generations, and a lot of family businesses. At Ernest Wright and Son, the scissor makers from Sheffield, Nick Wright is of the fourth generation. Jemma Marbling is a line of handmade marbled papers started by a girl and her father. And we have a few craft couples whose work we represent. Like Gareth Neal, the furniture designer, and Ruth Tomlinson, the jewelry designer. And Hannah McAndrew and Doug Fitch both do contemporary slipware ceramics, working with the same materials but in very different styles.

You call yourself "The Real British Souvenir Shop." So there will be no double-decker buses for sale?
We have pieces that are quintessentially British — the things you should take home from your travels rather than the naff souvenirs you find in airports. Things like hand-thrown ceramics, baskets, knives and scissors from Sheffield. There are no double-decker buses or Big Bens. But we do have sticks of rock.

Sticks of rock?
Oh! It's the classic pocket souvenir that British kids buy when they go to the seaside. It's huge long stick of boiled sweet with lettering through the center. If you went to Blackpool, it would say "Blackpool." Ours says "The New Craftsmen." 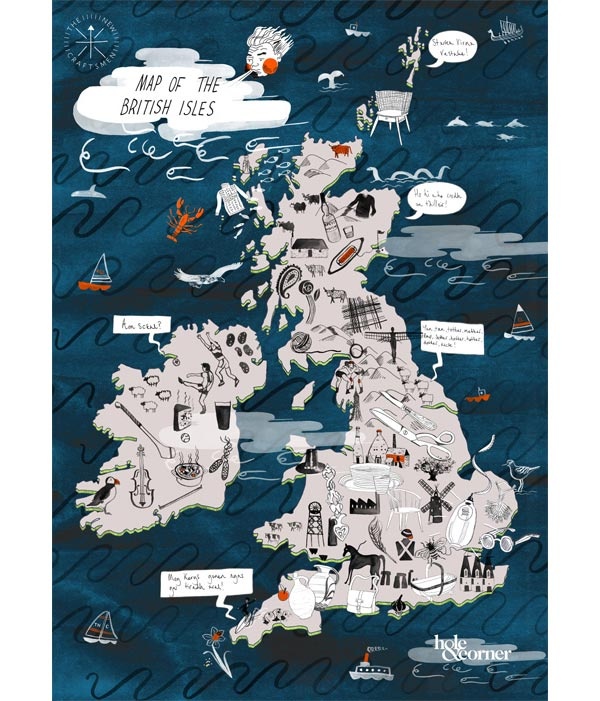 The shop's map of the British Isles.

Your artisans come from around the British Isles. Are any areas particularly strong?
We've got quite a lot from Dorset and Devon. Scotland is strong, too. Wales is due a visit so we can gather more Welsh goods. For Catherine in particular, traveling to find new work is really important. We don't take anything we haven't seen, and we always visit the workshops of the makers before we stock them. Understanding where they come from — literally — is important to us. We all come from different parts of the country, so there's always some local foraging when we get out of London.

What you're doing reminds me of the farm and produce movement and the idea that where the food comes from is as important as how it tastes and who prepares it.
The correlation between the food movement around provenance and sustainability is something that we really identify with. We do a lot of events where we bring people together around food. People understand the importance of food sourcing, and we want to make that connection explicit in craft.

Have you encountered any shops like yours?
There's a movement around the globe — of people realizing they are in danger of losing skills and traditions that are unique to their cultures and trying to figure out how to address this and do something about it, how to revive the skills but make them feel contemporary. In my fantasy world, I would love to organize a conference that brings all those people together.

Will the number of artisans you work with keep growing indefinitely?
We think 150 is about the most we can represent. We are now up to about 70. And that's a lot. The more you can strengthen the relationship, the more valuable you are to the artisans and the more loyal they are to you. So we're not just selling their work but having a vested interest in their work. Like a gallery would. This is the most satisfying way of working with people. Sometimes we'll introduce people to the mix and it won't work, but the churn will be relatively low because we invest a lot in building the relationship before taking people on.

What are your best sellers?
Ceramics are big. They make great gifts. We always sell out of work by Stuart Carey, who makes simple forms — bowls, jugs, in a pure palette of only four colors — and Sophie Woodrow, who does more sculptural pieces. Michael Ruh does hand-blown glass — whiskey tumblers, champagne glasses, and jugs — and we've since developed a lighting collaboration between Michael and Aimee Betts, who makes hand-braided cords. 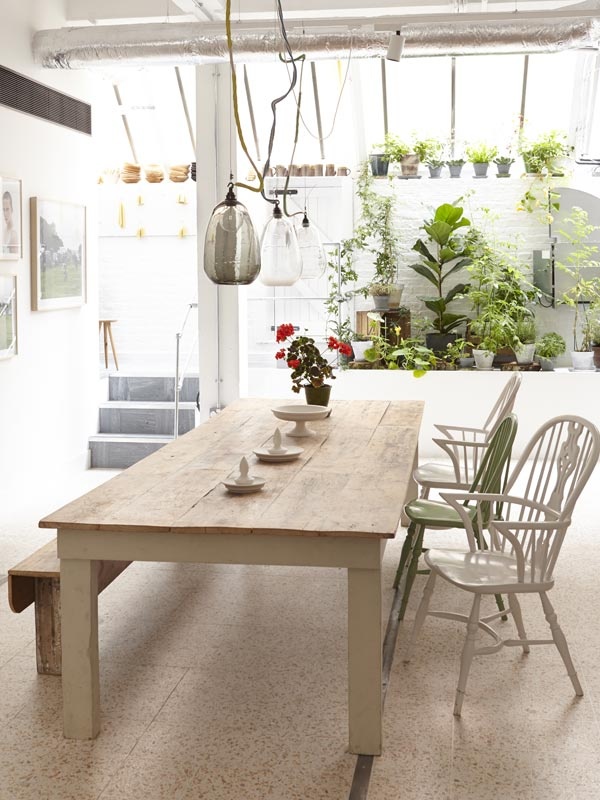 Photo courtesy of The New Craftsmen 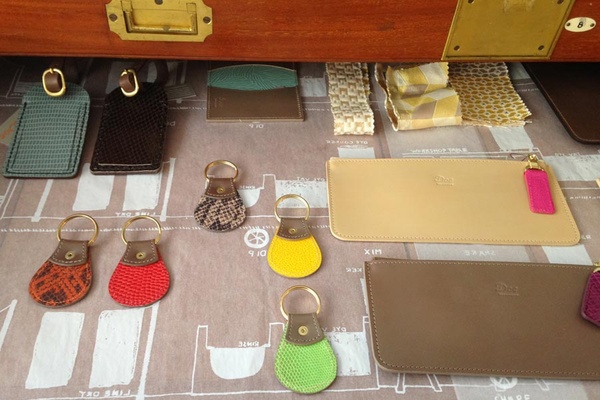 The samples drawer for Doe Leather.

Tell me about the big table under the skylights.
There are two sides to the business: the retail space in the front and the commissioning space in the back. If you're going to work with a craftsperson, the ultimate is to have something unique made for you. We have a big table and plan chests where each maker has a drawer with samples, information about their work process, and examples of other commissions they've done. The idea is that if someone wants to come in and have something made, we have a working space where we can talk through and pull samples.

And lunch?
Yes, we invite people to lunch every Friday. But we often leave a spare chair so that if someone interesting shows up, we can say, "why don't you stay for lunch?" that's how we met Sam Walton, the the editorial and creative director of Hole and Corner magazine. He popped in to tell us a bit about what he was doing, he stayed for lunch, and we have become great collaborators. We like serendipity and the idea that people can just pull up a chair and great things can happen. 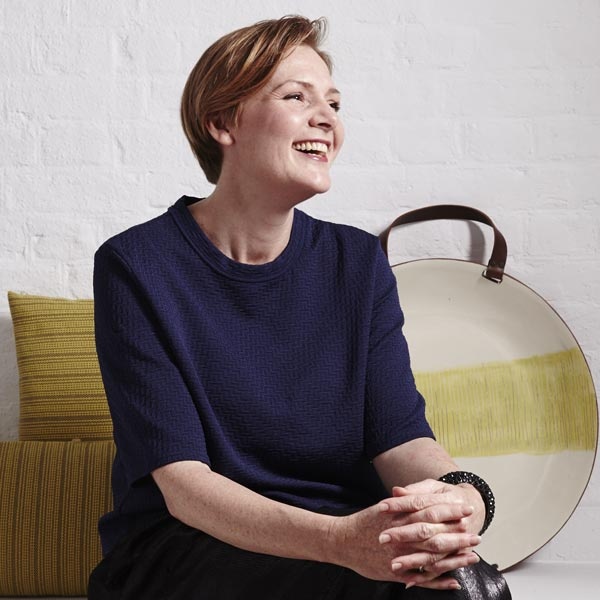