In London, there's tea time, then there's fun time. Both are lovely, but one is a little unorthodox in the best way. Armed with curiosity and vintage lingerie, Liza Foreman takes us behind the ropes of a women-only sex club. This one's for the girls all around the world.

LONDON – "Woo hoo. I think you are looking for us," said the girl dressed from top-to-toe in 1950s attire, standing down a small side-street buried deep in East London.

I walked toward her, passing a bar filled with local drunks.

"Are you looking for The Skirt Club?" she whispers in my ear as I got closer.

"Take the lift to the top floor," she said, pointing inside.

I was soon whizzing skywards to a penthouse with a prim-looking girl in a polka dot dress. I wasn't quite sure what to say. How do you make small talk with others en route to an elite sex club for bi-curious women?

I asked if she had been before.

At the door to greet us were two cheerful, '50s-styled girls, ticking off names from a list. I was surprised to see that they were fully dressed.

The theme for that night's party was 1950s pin-up girl. I had taken The Skirt Club at their word and duly traipsed out to Portobello Road in search of What Katie Did, the vintage lingerie shop which also has a branch in Los Angeles, to buy a seductive retro outfit. Like The Skirt Club, What Katie Did launched here in London. The shopping trip had been an education. Elastic, I learned, was only permitted for use in bras during the war. The 1950s were all about pointed bras. I tried on a half dozen outfits before settling on a corset and matching bra, which I paired with vintage shoes handmade in Brighton.

The shoes were the first to come off that night. Gathering myself at The Skirt Club's door, I realized that I was only wearing the aforementioned underwear under my long Lanvin coat, while everyone else was wearing dresses.

"I'm only wearing underwear," I told the hostess. "Is that okay?"

"That is perfectly okay," she said, batting her eyelids. "But we have a no heels policy," she added, handing me a pair of fluffy black slippers.

"I'm not sure if I should bend over," I said, reaching for my heels.

And so the evening began as it meant to, with lots of wild flirtation and girl-on-girl fun.

London is awash in new members clubs. They have become, it seems, an unstoppable trend. But I can guarantee that none are as fun or seductive or anywhere near as unique as this one.

A bit of history: After attending sex clubs with a then partner and realizing it was all about him, Genevieve LeJeune decided to do something for the girls. And in 2014, The Skirt Club was born. 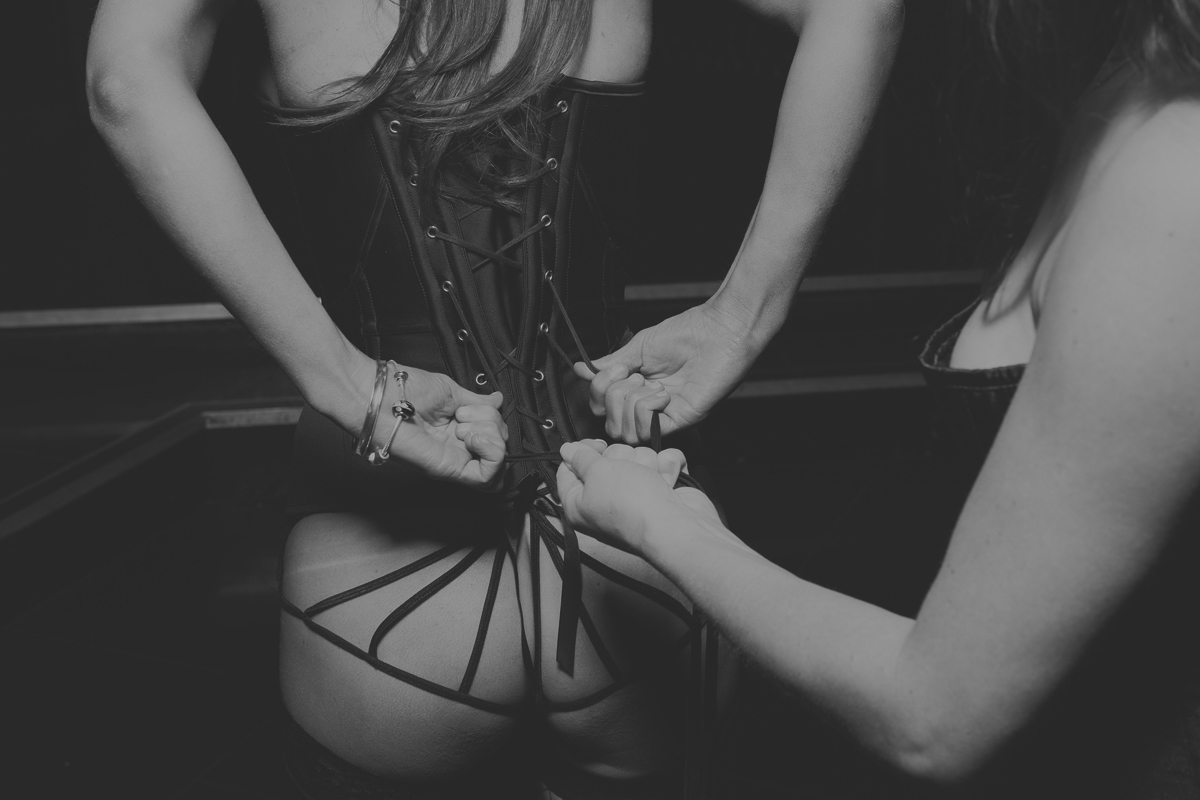 LeJeune has a background in finance, and she was on the money with her idea. Statistics published on club's website show a large increase in women who declare themselves bisexual. Proving the point, her club has become a traveling phenomenon. The Skirt Club launched in New York earlier this year, in Sydney this summer, and will open in Los Angeles in the second half of September. San Francisco is also in sight and there is a Miami edition of the event.

Once inside the penthouse, I was relieved to discover one other girl who was only wearing underwear. It was Genevieve.

But it didn't really matter what anyone was wearing. It was soon all to come off.

Sipping Champagne on the balcony overlooking the London skyline and chatting to the group of everyday women gathered outside, it was hard to imagine how the evening would unfold. People came from all walks of life. One had gone so far as to be in London on a family trip, in order to attend.

The woman who had greeted me so enthusiastically turned out to be a motivational speaker. As part of the night's lineup, she gave a truly moving speech about how she learned to love herself. "You are ugly, you are," she recalled a woman shouting at her one day, before she transformed herself from the inside out and felt too beautiful to care.

As the girls gathered inside, an award-winning burlesque performer brought Marilyn back to life for the packed room. I chatted to a respectable-looking girl in specs during the show. The next time I saw her, she was naked in the bathroom, watching a tangle of white bodies making love in the oversized tub.

From Champagne, it progressed to cocktails and vodka shots washed down with cinnamon. Soon the cinnamon shots became part of a game: A naked woman lay on the table with a strawberry in her mouth. Two contestants had to lick the cinnamon from each side of her body to claim the prize of another shot of vodka. There was no shortage of naked women or contestants.

Then the alcohol set in. Women played spin the bottle in the center of the room and a girl approached me. Before you knew it, everywhere you turned girls were stark naked and making out, packed like sardines on the bed, on the sofa, in the bathroom, on the rocking chair.

Everyone knows sex clubs in London like KinkySalonLondon fetish-themed Torture Garden. But The Skirt Club is its own special place, with its own rules and perks. The evening was an entirely liberating event. It was as if love ruled the world. There were no judgements. It was a space in which men didn't exist and woman bonded undeterred. It was a taste of women having all the power and calling all the shots. A bed had collapsed under the weight of the girls and the rocking chair had been rocked a bit too much. "Such are the problems of The Skirt Club," said LeJeune via email the next day.

It was most certainly the wildest night I've ever had, and also one of the most freeing. It was addictive. And so it was that I found myself on Portobello Road buying a 1930s kimono and a fur stole for the concubine event that followed a month later, as I planned to fly to New York for their Queen of Hearts party in July as a The Skirt Club Gold Card member. It's all in good fun with the girls.

Can You Handle a Paris Sex Club?
So You Wanna See a Thai Sex Show
Fathom's London Guide