We're very excited about Fathom contributor Mark Ellwood's new book, Bargain Fever: How to Shop in a Discounted World. He's distilled what he's spent a lifetime learning about shopping all over the world into a lively, informative, and engaging read. What's the quick takeaway? Here are the top ten tips and lessons — acquired the hard way so you can get them the easy way.

I've spent the last two years knee-deep in deals and discounts, researching my new book Bargain Fever: How to Shop in a Discounted World. It's been a travel-heavy trip: I've hopscotched from the Grand Bazaar in Istanbul to a luxury outlet mall outside Tokyo and a small ranch home outside Tampa that could claim to be couponing's spiritual capital. I dedicated one chapter to culling lessons from the industries like travel and real estate that have long operated in an entirely discount-driven model. From that journey, both literal and metaphorical, here are my top ten lessons.

1. Why You're Not Getting an Upgrade

There's one tiny detail often overlooked about the halcyon days of aviation: The reason airlines were able to lavish treats and service on passengers was that prices were set centrally by the government. So the only point of differentiation among airlines came in how hot the food — or the stewardesses — were.

2. Why You Have to Pay to Get Drunk on a Plane

Regulations reached beyond price controls, too: Early on in the era of commercial flying, there was a two-drink minimum on board. Of course, airline ingenuity worked around this, as one veteran trolley dolley told me. "We had a sixteen-ounce lowball for the first and a little carafe as big as a glass for the second. So it was two glasses, but about eight drinks," she admitted.

3. Those Antiques? They Were Made Yesterday

Go thirsty when you go to the Grand Bazaar in Istanbul. Every shopkeeper will ply you with sweet minty tea. And don't be surprised to hear more English, German, and Russian than Turkish: That wonderful, centuries-old Aladdin's Cave of counterfeits and treasures essentially exists to cater to tourists now.

4. The Only Real Way to Save on Hotel Rooms

Book every hotel room via Tingo.com, the service which automatically refunds the difference in cost if anyone books an identical room on the same night for a lower cost. It's never failed me.

5. Sorry, You're Not a Jetsetter

Flash sales are for fools. The best hotels have realized that working with flash sale sites backfires: It brings in clientele that nickel and dime over everything, and the price slashing isn't offset by extra spending. Besides, you can wrangle better rates by making a phone call and negotiating instead of through a flash sale.

Never accept the first price you're offered for a flight. Six weeks ago, when I was booking a ticket from JFK to LHR, I checked costs of a seat on Delta in a Safari browser window. Simultaneously, the exact same seat was $200 cheaper on Virgin Atlantic, the flight's codeshare partner. Lesson learned.

Remember that a trip to an outlet mall in Japan will be very frustrating to most Caucasians. Firstly, since the retail prices of designer labels are already inflated, the markdown essentially brings them back in line with normal prices in the United States. Secondly, since Japanese people are markedly more petite than even sample-sized Westerns (like me), don't expect much of the stock to even fit. I spent the week after that day trip on a diet.

8. You'll Never Guess Where the Best Hotel Discounts Are Hiding

The best way to score a bargain on a hotel room is a canny workaround. Sam's Club and Costco sell hotel gift cards at a discount from time to time — Hyatt, for example, has done it in the past. $100 vouchers will be offered for $80-$85, which is an instant 15 to 20 percent saving on your next stay.

Coupons were as illegal as cocaine in Germany until 2001, a vestige of an anti-Semitic law around pricing enacted by the Nazis to stop larger Jewish-owned department stores from undercutting Aryan mom-and-pop shops.

10. They're Not Very Friendly Skies

Airline executives put the crew in crude. Iconic American Airlines CEO Bob Crandall blasted a Senate committee mulling deregulation of air fares with a tirade that made the air bluer than an Andrew Dice Clay concert. "You fucking academic eggheads! You don't know shit. You can't deregulate this industry. You're going to wreck it. You don't know a goddamn thing!" 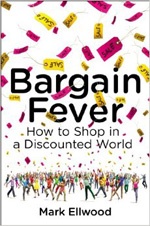 That's just the beginning. Read the book, and you'll never feel like a sucker again.
Bargain Fever: How to Shop in a Discounted World, by Mark Ellwood

Fathom Questionnaire
My Best Souvenir: What Mark thinks is worth ten times the price.