American academic Lindsay Comer spent a year in St. Petersburg pursuing a masters degree in Russian / Eurasian studies, with a focus on politics and economics. Opting out of student housing, she moved into a small apartment with a babushka who didn't even trust her to filter water. During her time abroad, Lindsay developed an understanding of how and why things work the Russian way and gradually fell in love with the culture. So much so that she and her husband recently bought a dacha in Estonia and plan to check in with their vegetable garden and friendly neighbors as often as possible. (Jealous? Yes.) We found Lindsay through her great blog, Life in Russia, a chronicle of her "life in the post-Soviet space." Over a three-hour Skype session, we talked about her first impressions of Russia, the people, and the culture. 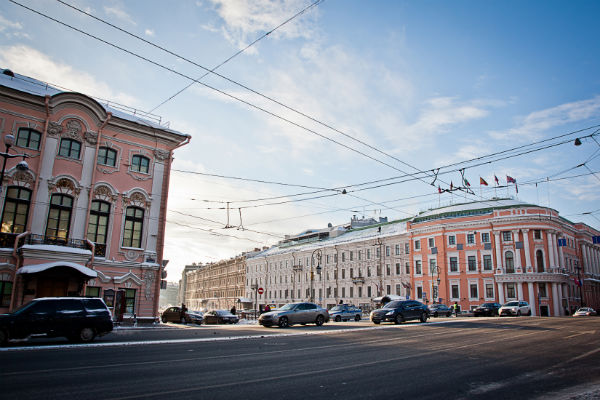 It was 1999, one year after the financial crisis, and the Russian landscape was much poorer than it is now. My father and I visited Seltso, a city south of Moscow near the border of Belarus, to visit the family of an exchange student that would live with us in America. My father had befriended Luba and her family on a previous trip to Russia. Our families remain close to this day. Luba and her family are lovely people and worked very hard to introduce me to Russian culture. They persuaded me to participate in banya, shop at local markets, and sample different cuisine. I look back at that time fondly, but as an introverted sixteen year-old girl on her first international trip, I found everything overwhelming and out of my comfort zone. I didn't have an urge to revisit Russia until laters years when I started to read about the country's history.

I decided to give the motherland a second chance and immerse myself in local culture by enrolling in a master's program at the European University of St. Petersburg. I found a small room for rent in an apartment right off Nevsky Prospect, St. Petersburg's main avenue. The proprietor was an older Russian woman, who surprised me with her vigor and strength of character. At 70, babushka works full-time at the local library and rents a spare room to foreigners just to get by. Yet she still has the energy for time with family, dinner with friends, and nights at the theatre. As time went on and my Russian improved, we grew closer, and I began to admire her resilience and her ability to enjoy the day's simple pleasures. 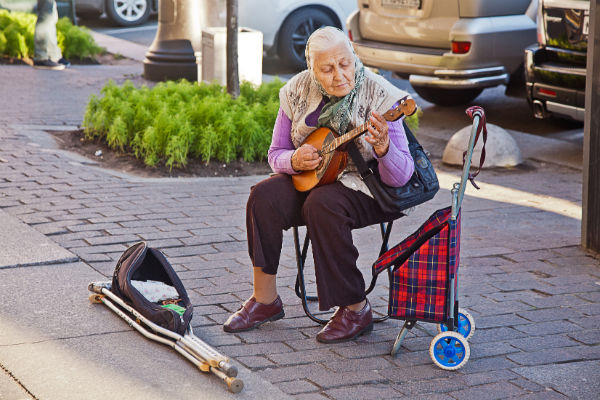 Not the babushka she lived with, but clearly a soul sister.

Russians are blunt and serious, at least in public. Russians don't embrace small talk like Americans do and tend to conduct personal conversations in private. During my first few months in St. Petersburg, I was verbally scolded many times for unknowingly doing something wrong. For example, I did not know I had to pack, weigh, and price vegetables myself before paying for them until after I had waited on line for the visibly irritated cashier. I was scolded for wearing headphones on the street and walking into pedestrian-blocked zones (beware: falling icicles).

There are no lines at the bank. Just an unstructured mass of customers heading to open teller windows in no particular order. Once, after standing around for 30 minutes waiting my turn, I tried my luck using the local technique and was yelled at for cutting the "line." The more I was exposed to the Russian way of doing this, the more I started to understand and accept it. 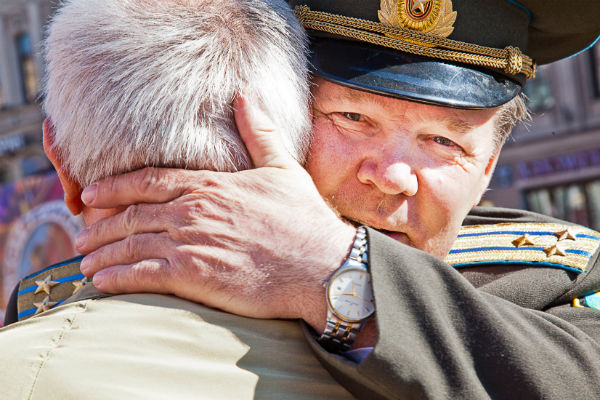 Given their notoriously aggressive leaders and rough disposition, I assumed Russians would be workaholics. While there is a hard work ethic here, the people of St. Petersburg are in less of a rush than you might think. The market economy is just starting to pick up in Russia, and many people don't feel excessive economic pressure to perform day in, day out.

I didn't have to look far to experience St. Petersburg's older lax mentality. People never seem to be in a rush to get to where they are going and service is not always up to par. My language tutor told me that Russians aren't work-a-holics like we are. When I needed a break from my studies, I would step out for a walk. I began to notice that almost every day, a different lucky couple was getting married in a St. Petersburg park. A Wednesday wedding, unheard of in America due to work obligations, is commonplace in St. Petersburg. With absolutely no qualms, people will take off work for celebrations. 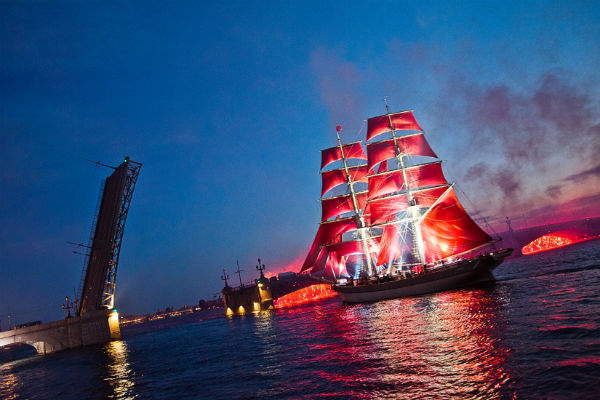 After returning to the United States, I found it hard to keep up with the stress of everyday life. Russians take their time and celebrate the little things in life. This simplicity was really soothing, and I missed it.

As summer rolls in, locals celebrate the end of the paralyzingly cold winter with the White Nights Festival, an international arts festival from May to July, the season of the midnight sun. Throughout the entire time period, the sun graces the sky until one or two in the morning, repaying the sun-deprived for their patience through winter. Even in 40- or 50-degree temperatures, with snow not yet completely melted, people will flock to the Peter and Paul Fortress beach to sunbathe.

The festival culminates in late June with the Scarlet Sails holiday, which celebrates the end of school with fireworks, parades, and boat shows along the river Neva. People head to the spectacle with beer and champagne bottles in hand for a stroll along the river or a picnic in the nearby park. It's beautiful seeing people share time and acknowledge the transition between seasons with such grandeur and enthusiasm. Russian history is tumultuous, economically and politically. People have adapted to the tough times by appreciating friends and family. There's a spirit of brotherhood and community in this part of the world that isn't felt as much in the United States, where we tend to be more independent and self-oriented. 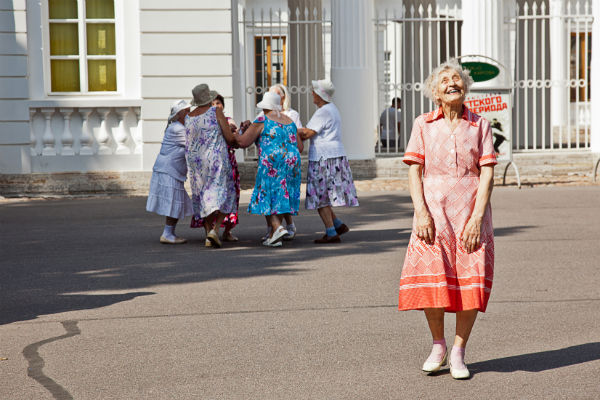 Caught dancing in the sunlight.

During session breaks and in between important deadlines, I took many trips by train to cities outside St. Petersburg with my husband, who would fly in from the US to join me on my adventures. We traversed the post-Soviet space, touring cities in Latvia, Lithuania, Estonia, Ukraine, and Russia, gradually falling more and more in love with the culture of Eastern Europe. We could have easily booked flights to save time, but since we typically took trips to many cities in one go, it made more sense to travel by train. Plus, I adore the experience of sitting amongst regional travelers and gazing at the passing scenery while the train whips from station to station. Some might be intimidated by the thought of sitting across from foreigners for hours in a small train cabin, but my husband and I never had anything but enjoyable experiences. We found locals to be friendly and eager to help. Unavoidable passport checks would quickly reveal that we were American, and people would respond to the news by approaching us to chat or giving us thorough directions if we needed them. 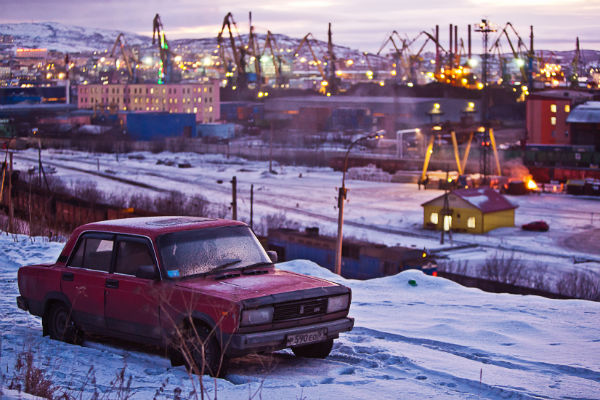 The iconic cranes of Murmansk.

One trip took us north through cold wasteland to Murmansk. We hadn't planned on it, but we figured the opportunity to travel on such short notice might not come again. The 27-hour journey towards the Arctic Circle was seemingly unending, cementing the reality that every desolate mile north was one farther from civilization.

When we finally arrived, I couldn't believe such a place existed. The city is surrounded by mountains and replete with old Soviet-style buildings, massive cargo ships, and soaring cranes. But what really gives the city its unreal quality is the never ending twilight. The sun never fully rises in the winter and the generated electric glow gives the Arctic port city an eerie, surreal aura. We spent the requisite amount of time sightseeing, but preferred huddling indoors to being outside in the cold. For food, we usually bought some cheese, bread, and wine and ate indoors, although we did find a little Ukrainian restaurant with pretty good food! It might not be Russia's premiere tourist location, but to experience otherworldly ambience, Murmansk is a can't-miss.

LOOK BENEATH THE SURFACE

Many people are dissuaded from visiting Russia because they perceive the people as tough, rigid, and unfriendly, and the atmosphere as stern and cold. But my understanding is that Russian toughness is a defensive byproduct of their environment and their history. If you're turned off by aggressiveness, you'll miss out on the conversations and experiences that lie on the other side of this rough exterior. I remember one particularly square, callous-looking businessman who came up to me and my husband at the hotel bar in Moscow and demanded we have a drink. He turned out to be very friendly (albeit intimidating), and we talked for some time while he sat and smoked his pipe.

How to tap the spring of culture behind the stone wall? Understanding. When I first visited Russia in 1999, I didn't understand the twists and turns of Russian history. Nor the decades of endured suffering under a regime that, upon collapsing, only furthered the struggle to survive. In the absence of historical and social context, Russians come off as cold. But after living, eating, enduring, and passing the time like a local for one year, I discovered just how contagiously friendly, helpful, and inviting Russians really are.

Little Black Book: The Expat's Moscow
The Paris of Siberia
Sochi in the Summer

This interview was written and edited by Fathom's Daniel Schwartz.