At one point, you will get sick of the crowds and canals of Venice. And that's when you'll follow Jackie DeGiorgio's lead and go north to the hidden gem that is Venissa for breathing space and a meal of a lifetime.

VENICE – It had always seemed impossible to imagine standing anywhere in Venice without hearing the supple canal water lapping gently against a fondamenta, a distinct tempo that is just as quintessential Venice as the graceful gondoliers, mysterious Carnevale masks, and narrow serpentine calli. Then I stayed at Venissa, a wine resort on the remote island of Mazzorbo in the northern Venetian lagoon.

Because while the Queen of the Adriatic had never gotten old to me, she had certainly gotten under my skin, despite her allure. I found the problem wasn't so much the tourists as it was the discomfort of the interminable crowds. Most disappointing, though, was the out-of-towners' tendency to chalk up visits to St. Mark's Square, Doge's Palace, Rialto Bridge, and Murano as "seeing Venice." Well, they didn't.

Comprised of 188 islands, Venice's appeal extends far beyond Venice proper. Mazzorbo's sparse population, uncongested walkways, and scant canals do not render this distant enclave any less Venice. Named for a sobriquet that late poet Andrea Zanzotto bestowed upon the floating city, Venissa is equal parts restaurant, hotel, farm, and winery. And contrary to popular belief, getting to Mazzorbo was not as arduous as it had seemed. 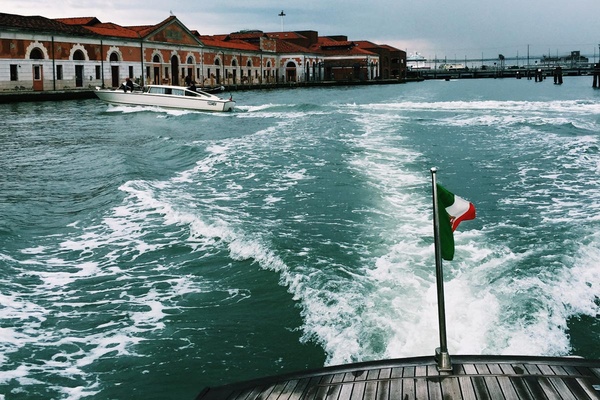 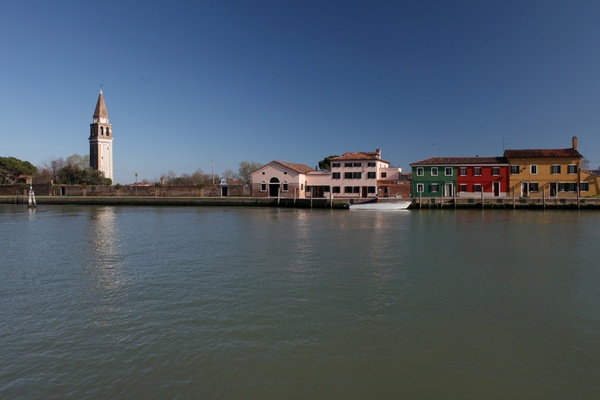 Approaching Mazzorbo from the water. Photo by Francesco Galifi.

Rather than head to the vaporetto upon arrival at Santa Lucia train station, a path I had trod more times than I could count, I set off for a rather uneventful little inlet of the Grand Canal tucked away north of the station to board a private boat to Venissa. (Yes, I felt like a fancypants.) Instead of zigzagging down Venice's main drag, the boat cuts right, gliding past a row of gothic Venetian palazzi to creep under an alarmingly low bridge and emerge northbound on the jagged teal-gray water of Laguna Veneta. We sail full speed ahead for a half hour, cruising by Fondamente Nove, Murano, and San Michele cemetery. The slanted bell tower of Burano's San Martino materializes from a faraway speck against the cottony overcast sky as we approach Mazzorbo.

Venissa's unassuming, salmon-hued facade and minimalist reception area conceals the flourishing farmstead that lies just outside the back door, a Narnia-like hideaway minus the fauns, White Witch, and 100-year-old winter, but brimming with a verdant landscape, a canopy of cherry trees, and a portico-covered patio. Scattered flecks of sunlight blaze through a frayed blanket of clouds, gilding Venissa's two-hectare vineyard, produce gardens, and fish farm, all enclosed by an early medieval wall and presided over by a 14th-century bell tower. A kaleidoscope of red rose-entwined arches stretch as far as the eye can see, and, for a split second, I have the feeling I'm not in Venice anymore. Until I inhale. There may not a bridge or gondola-studded canal in sight, but the unmistakable salty aroma of the Venetian lagoon coats the air. 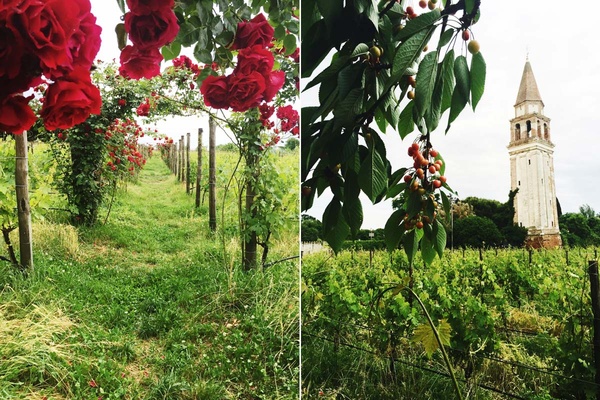 Roses and cherries on the farm. Photo by Jackie DeGiorgio. 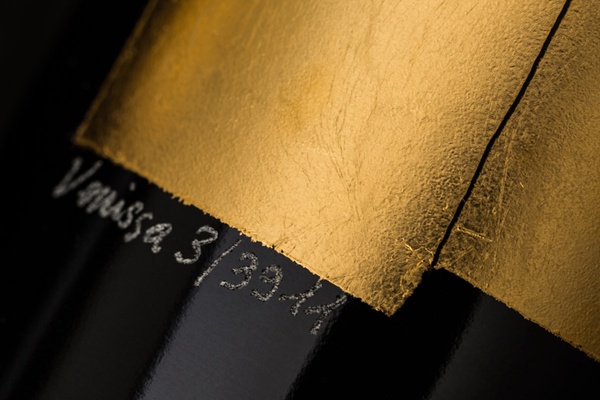 The former winery and farm was abandoned after the flood of 1966, the worst in Venice's history. Gianluca Bisol, a luminary of prosecco's prestigious Valdobbiadene D.O.C.G., acquired and started restoring the estate in 2006. Today, nine retirees from Burano — the neighboring island known for its lace, sandolo boats, and vibrant candy-colored cottages — look after Venissa's gardens and vines.

Venetians had harvested wine grapes for centuries, until the flood wiped out the islands' vines, including the indigenous Dorona di Venezia, a rare golden grape. In 2002, Bisol discovered Dorona vines on Sant'Erasmo and, with the help of his brother Desiderio and renowned winemaker Roberto Cipresso, replanted them at Venissa. The 2010 harvest marked the first vintage, a deep gold wine that epitomizes Venissa's matchless terroir, characterized by salt, silt, and microorganisms that clung to the soil after the high waters came and went every three to five years, a phenomenon that still occurs. Adhering to Venissa's local philosophy, the bottle embodies its surroundings with a hand-applied gleaming gold label crafted by Berta Battiloro, a precious metals workshop, before a re-firing in the oven of Murano glassmaker Carlo Moretti. Approximately 4,000 bottles are produced annually, and, this year, Venissa debuted a Rossoof merlot and carmenère from the 2011 vintage. 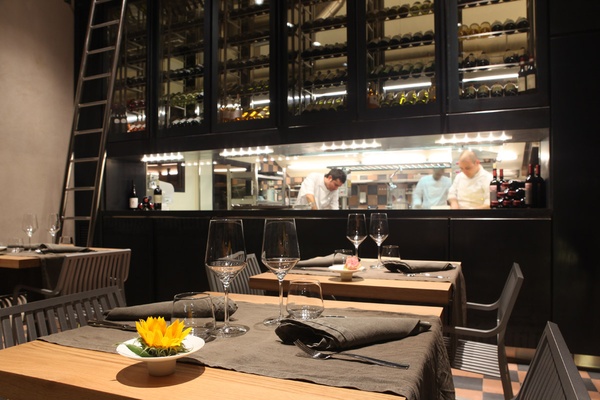 The open kitchen at the restaurant. Photo by Francesco Galifi.

Enclosed by floor-to-ceiling glass windows that overlook the lush garden, Venissa's 18-seat, intimate yet convivial dining room is enhanced by the homegrown white dahlias spilling over the rims of the empty Venissa wine bottles that grace each table. The open kitchen connects guests with the unrelenting chefs, who seem like they are cooking for you and you alone, while the scenery is a constant reminder of the simple origins behind the chefs' intricate preparations. 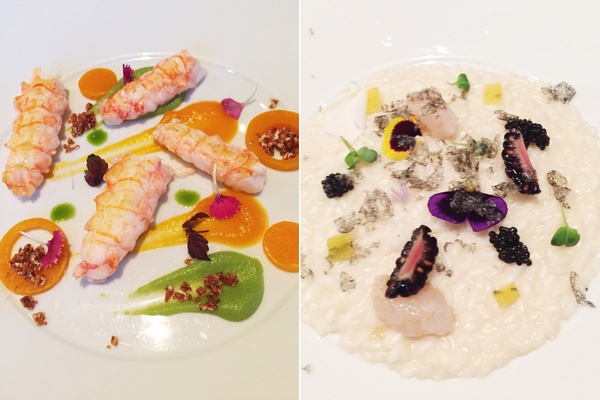 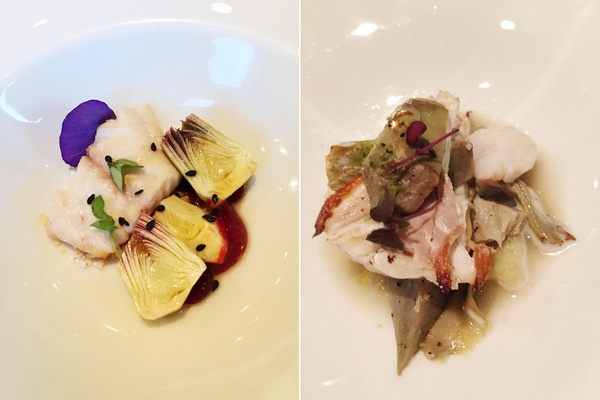 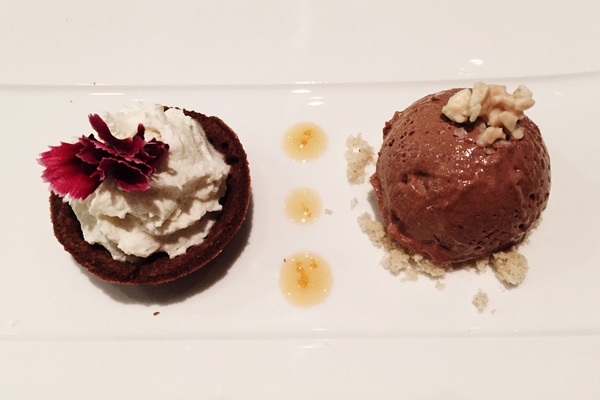 The chefs welcome me with a miniature sesame-flavored wafer cone topped with a delicate scoop of baccalà mantecato, a classic Venetian mousse-like spread of dried cod, and savory house-made taralli, typical southern Italian snacks. Joksimovic opens the show with a tender red mullet fillet accompanied by castraure, the first flower from an artichoke plant that has been cut in a manner so specific as to "castrate" it. Silky strawberry sauce and hazelnut garnish complete her plate, which is followed by yet another one of her creations: Eastern and Western Scampi, a medley of tiny fava purée and carrot paste dollops with four succulent, seared lagoon scampi, sweet and savory caramelized almond brittle, and a touch of ginger.

I glance at the kitchen and watch in awe as Asoli gets his mantecato on, a vigorous cycle of whipping, tossing, and catching his risotto-in-the-making, adding a pat of butter here and there to ensure the rice takes on its typical creamy texture. On the plate, the white velvety bed of al dente Acquerello is complemented by quite the snazzy spectrum: sliced blackberries, diced asparagus gelatin cubes, translucent shrimp tartare, Caviar de Venise, and indigo and yellow nasturtiums, finished with scorzone truffles grated tableside. D'Oria's cacao-butter-seared-then-baked turbot entrée atop schiacciata (flattened) potatoes with steamed-then-roasted artichokes preceded a cassis sorbet palate refresher. Baiano's grand finale, "Black and White," is a playful approach to chocolate two ways: a dollop of lagoon absinthe foam nestled into a chocolate sponge cake and house-made chocolate ice cream sprinkled with Sicilian almonds. In addition to Venissa's namesake wine, a sampling of the Bisol winery's top sparklers, including a Metodo Classico made from the Glera grape, featured prominently on the mainly Italian 42-page wine list. 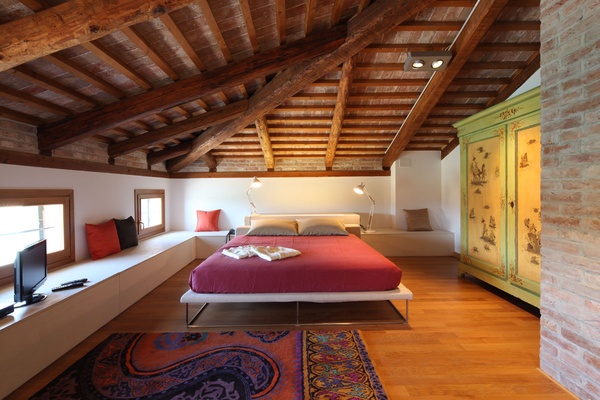 Rustic meets modern in the rooms. Photo by Francesco Galifi.

The wooden beam ceilings in Venissa's six inviting, elegantly snug guest rooms add a touch of rusticity to architect Mariano Zanon's minimalist aesthetic. Modern touches include vivid carpets and comforters, dreamy Living by Piero Lissoni beds, Driade's dainty bird-shaped mirrors, and chic Philippe Starck chairs. A stroll across the wooden footbridge on the estate's eastern edge ends in Burano where, this winter, the Bisols will expand Venissa by inaugurating 13 suites in two of the island's quaint rainbow-hued homes. This albergho difuso set-up lets guests live among the locals with the comforts of home, while simultaneously feeling pampered by the perks of solid service.

"What to do in the land all the way yonder?" you might wonder. Well, the range of activities in this little neck of the Venetian woods guarantee a dance card so full that you just might ask yourself, "Saint Mark who?" Through collaborations with local Buranese associations, rowing lessons and fishing excursions are available, as are cooking classes and exclusive photography courses with Obiettivo Burano, a group dedicated to celebrating and sharing the captivating beauty of the island, a true Instagram darling. 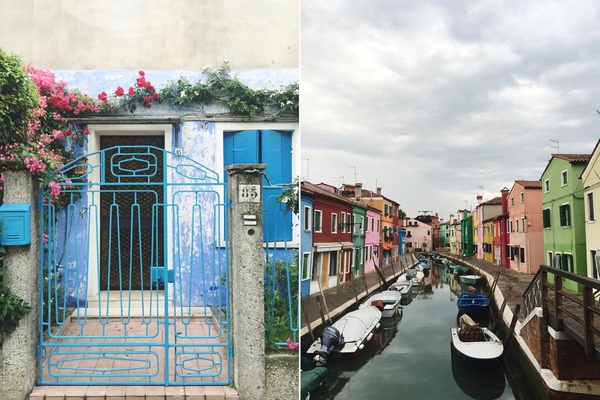 Capturing the vibrant colors on Burano. Photos by Jackie DeGiorgio.

From Venice: The 12 vaporetto from Fondamente Nove; stop: Mazzorbo-Burano. If arriving by train to Santa Lucia, take the 4.1, 4.2, 5.1, and 5.2 vaporetto to Fondamente Nove. Venissa can arrange pick-up by private boat for a fee. Water taxis are always an option, but keep in mind the fares are steep and costs approximately €115 from the train station.