Kate Donnelly heads southwest to take in the old city of Bordeaux, meet the man behind Lillet Rouge, and swim in the Atlantic.

BORDEAUX, France – The mission, as I chose to accept it: Take an early, high-speed train from Paris to Bordeaux. Read a book while coursing through 17th- and 19th-century homes and vineyards in the countryside. Nap. Arrive ready to tackle a new town.

Located on the bend of River Garonne, Bordeaux is considered the Paris of the south, a cultural center in one of the most prominent wine regions of France. The main train station, Gare Saint-Jean, is a five- to ten-minute ride from the center of town. Landmarks like Grand-Théâtre, the Girondins monument, and marble statues of Montaigne and Montesquieu are located downtown. Rue St. Catherine has been known as the main street since Roman times, filled with shops, cafes, and restaurants. The fancier shops converge at Cours de l'Intendance.

Walking around this splendid and charming city (it's a UNESCO World Heritage Site) is a treat. Bordeaux has been going through a pricey head-to-toe cleaning effort involving intensive sanding and washing. As a result, most of the limestone façades are glistening. Beautiful. 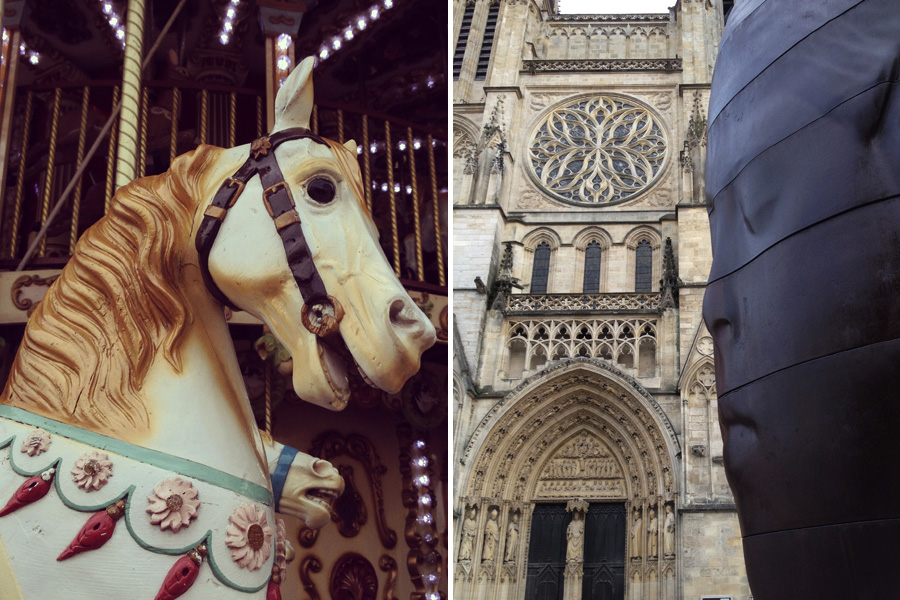 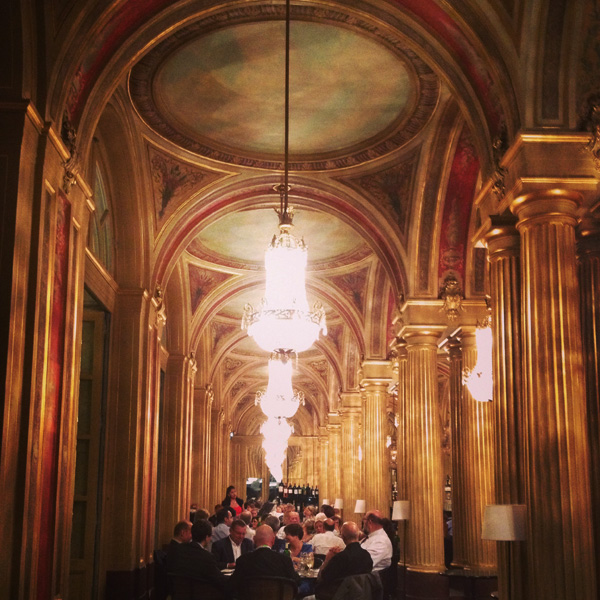 Don't miss the sturdy Grand-Théâtre. Built in 1780, it is now home to the Bordeaux National Opera and its elegant ballet company. Café Opera inside is a grand place to have a cocktail. 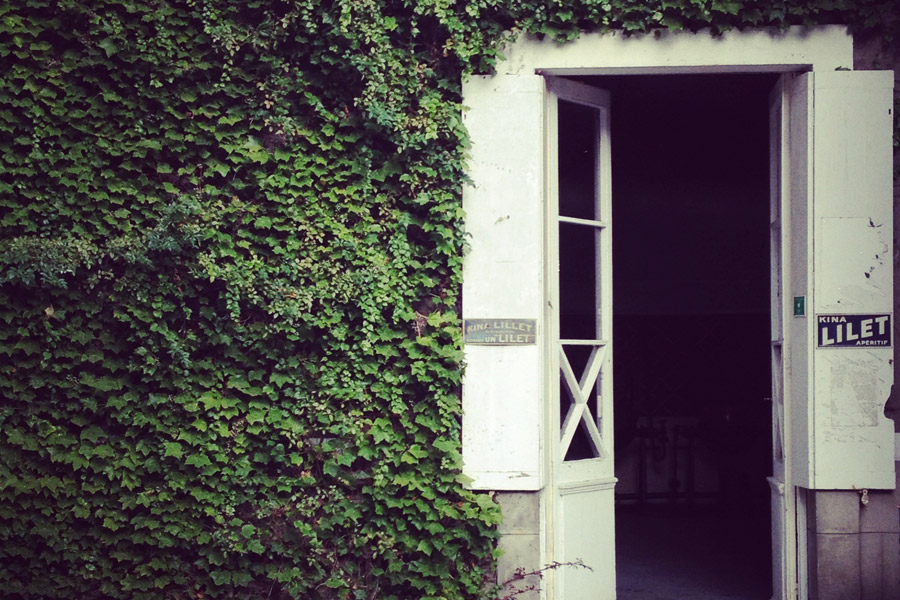 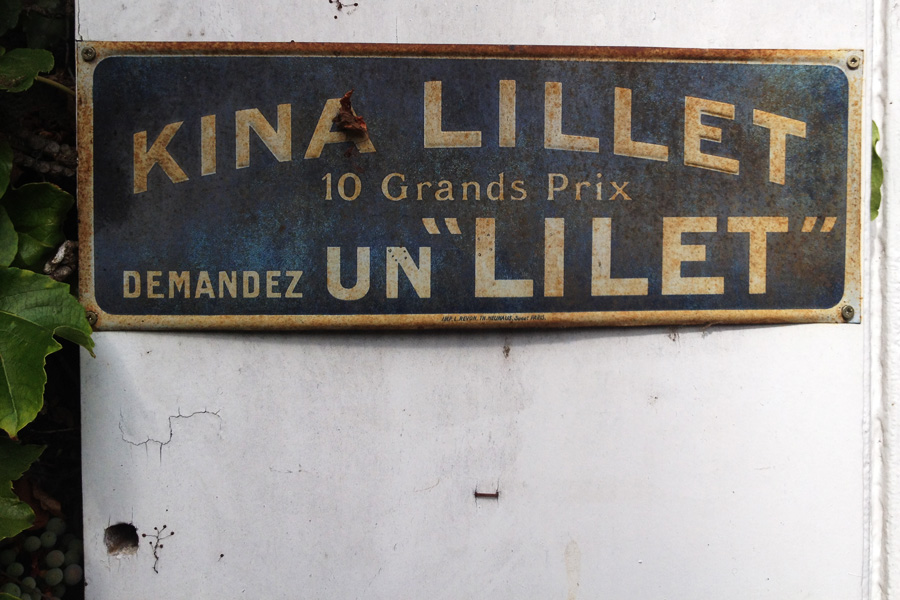 SPEND A DAY IN LILLET HISTORY

Just south of Bordeaux, nestled in the small town of Podensac, is the distillery of the French aperitif Lillet. An invitation to visit is the purpose of my journey. Founded in 1872 by two wine merchant brothers, Paul and Raymond, Lillet is still in its original location, a quaint building painted white, red, and blue. Inside, the place oozes with creaky charm and a pretty green courtyard. It's small and untouched, almost as you might have seen it in a Woody Allen Midnight in Paris flashback.

Lillet is a blend of Bordeaux wines (85 percent) and fruit liqueurs (15 percent) made by soaking fruit peels and ten fruit-based liqueurs, like sweet Spanish oranges and bitter varietals from Haiti.The blend is then aged in oak barrels for six months, where it develops its personality and character. It's a top-secret recipe and process that's been held close to the vest for generations. They've been making it the same way since the 19th century. 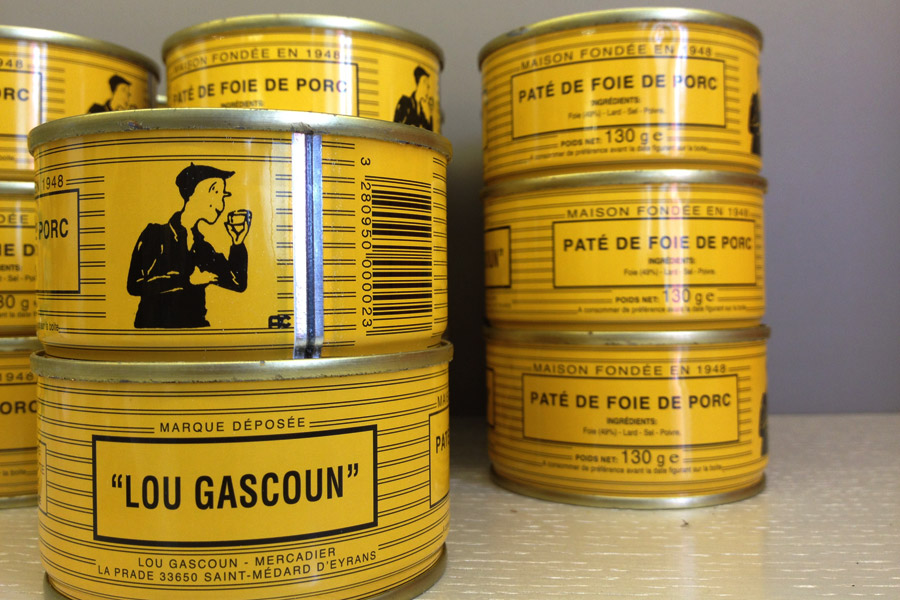 You're drinking history. Every time you open your bottle, a maximum of six people have had a hand in the production. Lillet's museum houses vintage posters and old relics like French artist Robert Wolff's trademark Kina Lillet posters from the 1930s. The small gift shop is brilliantly stocked with memorbillia like very cool yellow foie gras cans and Lillet Reserve, a varietal that is not available in the United States. 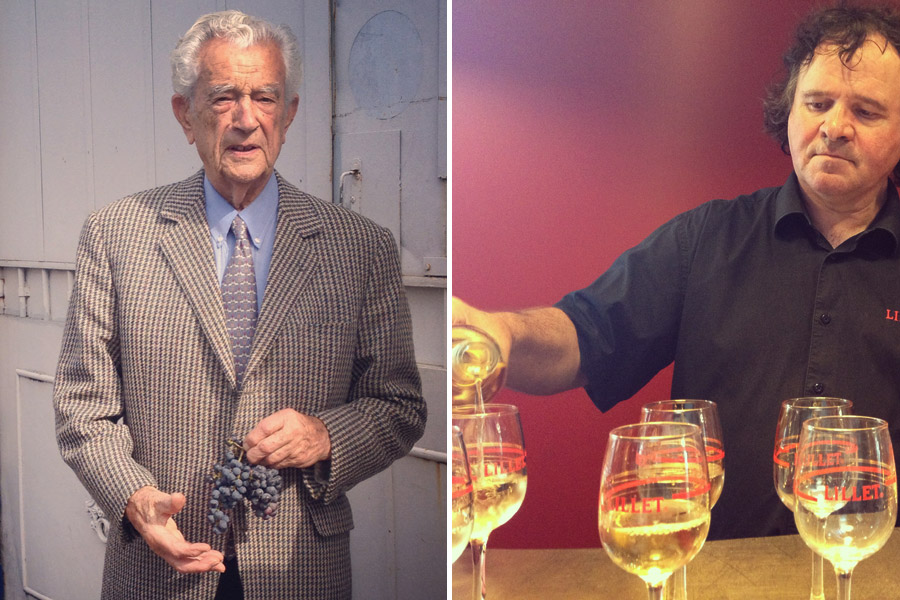 We were treated with a surprise cameo: 96-year-old Monsieur Pierre Lillet, the man behind Lillet Rouge, which debuted in 1962, looking dapper as ever in his Hermès jacket. He's the last living link to the original family. Lillet is now owned by Pernod Ricard, which preserves the company's historic footprint.

Pop culture plays a role in Lillet's fabled story. Ian Fleming's James Bond orders a Vesper in the 1953 novel Casino Royale. "A dry martini. One. In a deep Champagne goblet. Three measures of Gordon's, one of vodka, half a measure of Kina Lillet. Shake it very well until it's ice-cold, then add a large thin slice of lemon peel."

It doesn't take long to feel intoxicated from the history and charm. My mom and I often sipped iced Lillet at my parents' favorite Kansas City, Missouri, French bistro, Aixois. (Yes, they serve French food in the Midwest.) Experiencing the birthplace of something I've sipped with family felt all the more special. 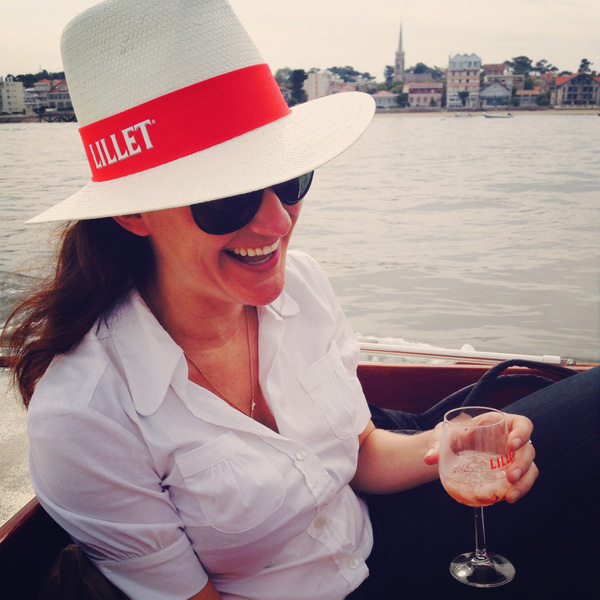 Lillet on a boat in the Basin, life is good.

HALF DAY IN THE BASIN

A 45-minute drive from Bordeaux gets you to the Atlantic Ocean's Bassin d'Arcachon, known to locals as "the Basin." We board a handsome, well-maintained pinasse, the traditional basin boat with a flat bottom.

From the boat you can spot the 30-story tall Great Pilat Dune. No, you're not in the desert, but the site is intriguing. Strong ocean winds blow sand on the shore, and the Great Dune continues to accumulate, moving upward. I wish we had had time to climb this strange wonder. The top affords excellent views of the Basin. 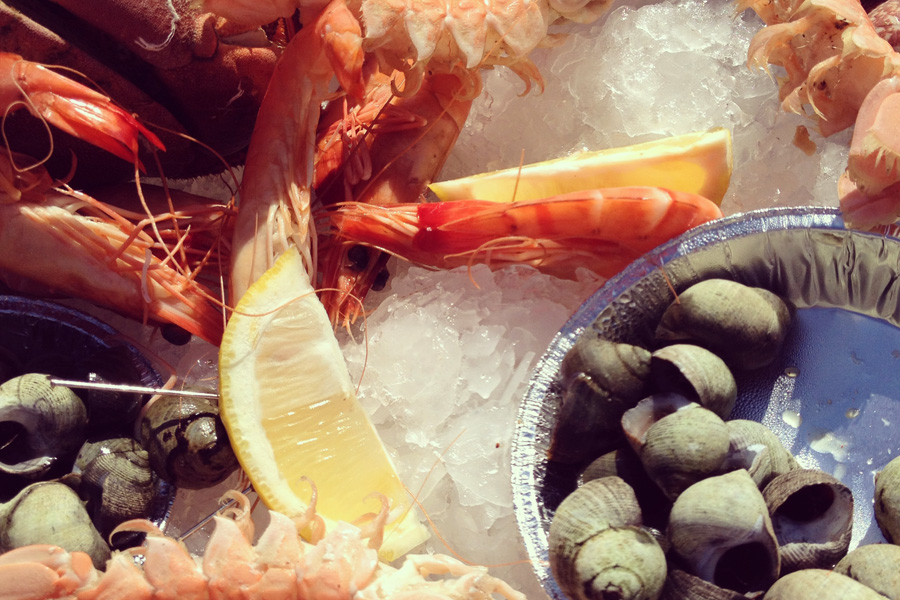 Lunch aboard the pinasse starts with an amazing array of Serrano ham and chorizo, fresh baguettes with waist-expanding butter on the side. We briefly dock to pick up our seafood. Our captain grabs a fresh array of crustaceans: shrimp, crabs, conch, sea snails, oysters, and clams.

After lunch, take a dive in the invigorating (if not, chilly) waters off the Banc d'Arguin under the bright autumn sun. The ride back to the car allows me to sneak up to the bow and close my eyes. 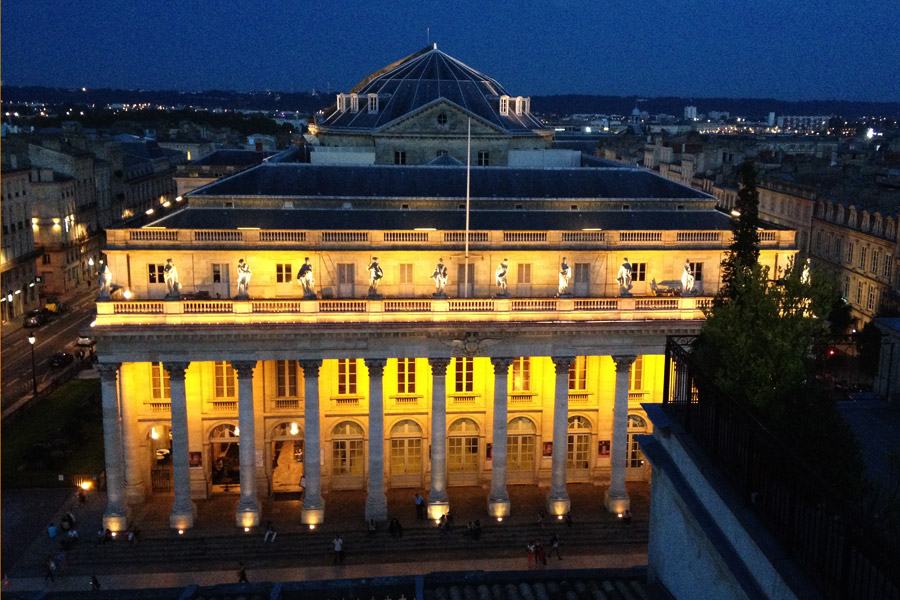 END WITH A PROPER NIGHTCAP

After a late afternoon siesta, we get rooftop drinks atop the Grand Hotel. Drinks are pricey, but the views pay royally. Dinner follows at the atmospheric Le Carré. A little beef carpaccio and pâté never hurt anyone, and the scallops are perfect. The crisp frites are lethally good and perfect for sharing or stealing. If it's nice out, grab a patio seat.

Café Bellini picks up later in the night courtesy of a DJ, low lighting, gorgeous chandeliers, and grand mixologists concoctions. 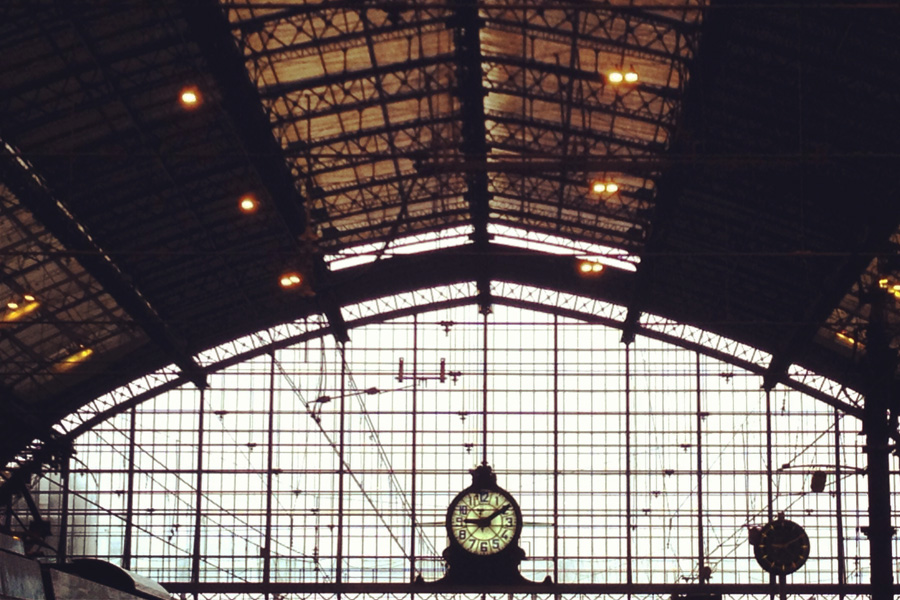 From Paris to Bordeaux and back, the high-speed TGV is the fastest, most efficient way at exactly 3 hours and 10 minutes.

Bordeaux is a highly walkable city. But if you need a lift, the Tramway de Bordeaux system is modern and efficient.

Ten miles from the city is the rustic country-situated Les Sources de Claudelie. City-slickers should base themselves at the ritzy Grand Hotel, while the smaller, more relaxed Hotel de Seze is well-appointed and charming.

Just Back From: Bordeaux, France
A Feast in Southwest France
Literary Excerpt: "Culinary Intelligence: The Art of Eating Healthy (And Really Well)"