As a Viennese resident with Austrian Jewish grandparents as her guides, Deborah Uri discovered pockets of Jewish Vienna in elegant coffeehouses, hidden temples, and the world's most famous artwork. She put together a daylong walking tour of the best the city has to offer.

VIENNA – To me, Vienna is one of the most captivating cities in Europe. Its historical significance and charm are found literally everywhere you walk in the city's first district. Although there are only about 8,000 Jews living in the city today, down from a pre-World War II peak of 200,000, the influence of the Viennese Jews is vast and plentiful. My grandparents were among the very few who both escaped the camps and returned to Vienna after the war. When I moved to Vienna in 1999, I had the pleasure of experiencing authentic Jewish Vienna with them. This is the way to experience it in a very rich day.

START THE DAY WITH A POWER BREAKFAST

Coffeehouses are the quintessential institutions of Viennese culture, and Viennese Jews, especially the intellectuals, frequented and owned many of these elegant cafes. Café Landtmann (Universitätsring 4, 1010) is one of my favorites. Order the wiener fruhstuck and a café melange.

Sigmund Freud was a regular at Landtmann, and I like to picture him sitting on one of the velvety banquettes confessing his envy to Arthur Schnitzler, his doppelgänger: "You intuit through secret knowledge, while my discoveries only occur after arduous examination."

Fully wired, you're now ready to pay a visit to the former practice and private quarters of the father of psychoanalysis. The Freud Museum (Berggasse 19, 1090) has thousands of documents, photographs, sculptures, and other items you are encouraged to free-associate with, dream about, and analyze. 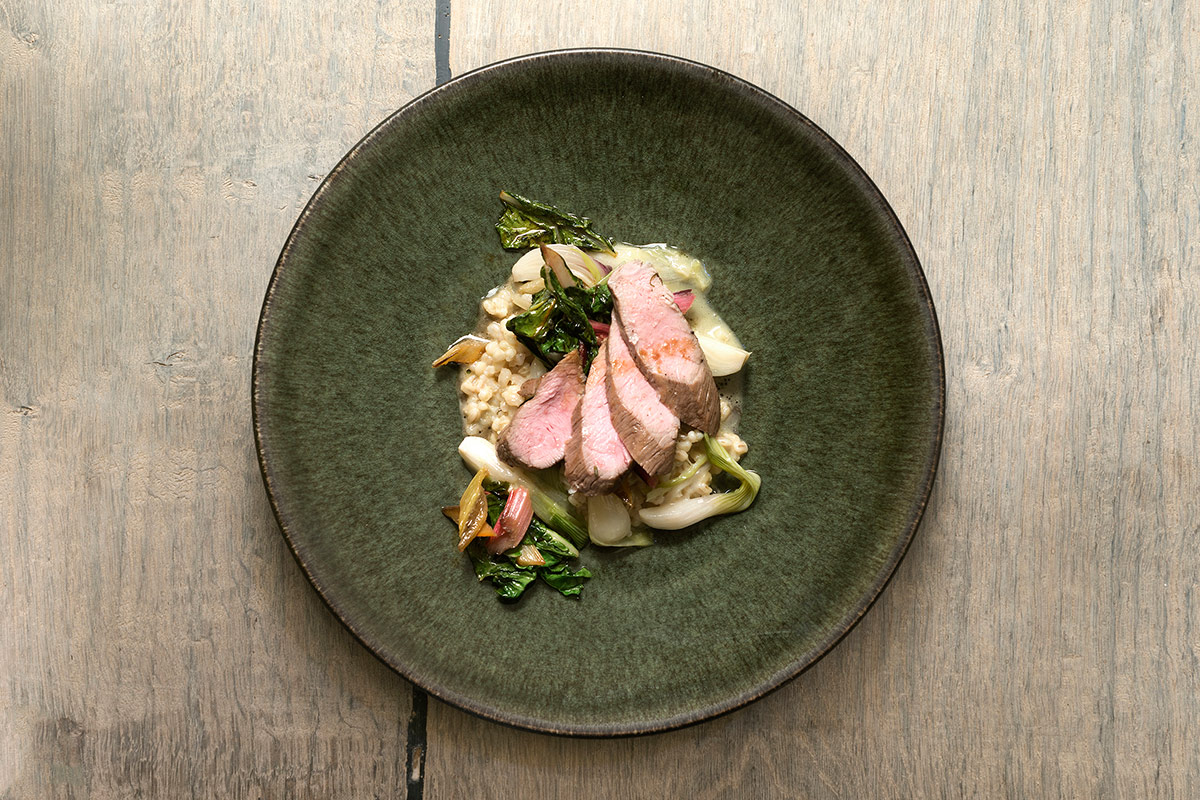 Look forward to lamb for lunch. Photo courtesy of Labstelle.

Make your way over to Museum Judenplatz (Judenplatz 8, 1010), to see the excavations of an old medieval synagogue and a virtual tour of a recreated Jewish quarter. Outside is the hard-to-miss Holocaust memorial, referred to as the Nameless Library.

Walk approximately half a kilometer via Judengasse to arrive at the Stadttempel, Vienna's main synagogue (Seitenstettengasse 4, 1010). You will notice armed guards walking the ends of the street that lead to the temple. You might be surprised to find that it doesn't have a grand entrance. That's because it was erected in 1824 at a time when Emperor Franz Josef demanded that all non-Roman Catholic places of worship be clandestine from street view. Interestingly, because it was housed between two apartment buildings and lacks a grand façade, it was the only one of 94 Viennese synagogues saved from Nazi destruction.

What I most love about this synagogue is the ceiling — painted a sky blue and evoking an ethereal, sublime atmosphere. I have countless memories of sitting with the women of my family, close to that blue sky, as we celebrated family b'nei mitzvah and weddings. And it was under this same sky that I too was married by the Chief Rabbi of Austria. Be sure to bring your passport for entry (Monday-Thursday, 11:30 a.m. and 2 p.m.).

LUNCH ON THE MAIN DRAG

Pop over to Bakerei Ohel Moshe (Lilienbrunngasse 18, 1020) in the second district. This is another rather bland storefront, but the unassuming entrance belies what you'll find inside: the city's best challah bread and chocolate rugelach that you will freak out for. Order extras for end-of-day snacking.

Labstelle (Lugeck, 6, 1010) is a hip lunch spot that has a changing daily menu. The chef adds a modern twist to classic Austrian dishes, some of which have been incorporated into the Jewish kitchens of the city. My favorite selections are their crème soups (like pumpkin seed ) and tiny cheese spaetzle dumplings. And marillen knoedel (apricot dumpling) for dessert.

Walk down Rotenturmstrasse toward the main pedestrian street, the Graben. You will pass Stephan's Cathedral, the city's most beautiful gothic structure. It was here in 1893 that Theodore Herzel, the father of the modern state of Israel, developed the idea of holding a mass public conversion of Jews to ward off the city's growing Judeophobia.

From the Graben, make your way down Dorotheegasse to arrive at the Jewish Museum Vienna (Dorotheergasse 11, 1010). The museum was completely redesigned in 2011 and is now a modern, light-filled building that contains an intelligently curated history of the Viennese Jews. The exhibits on the top floors focus on the 19th and 20th centuries. 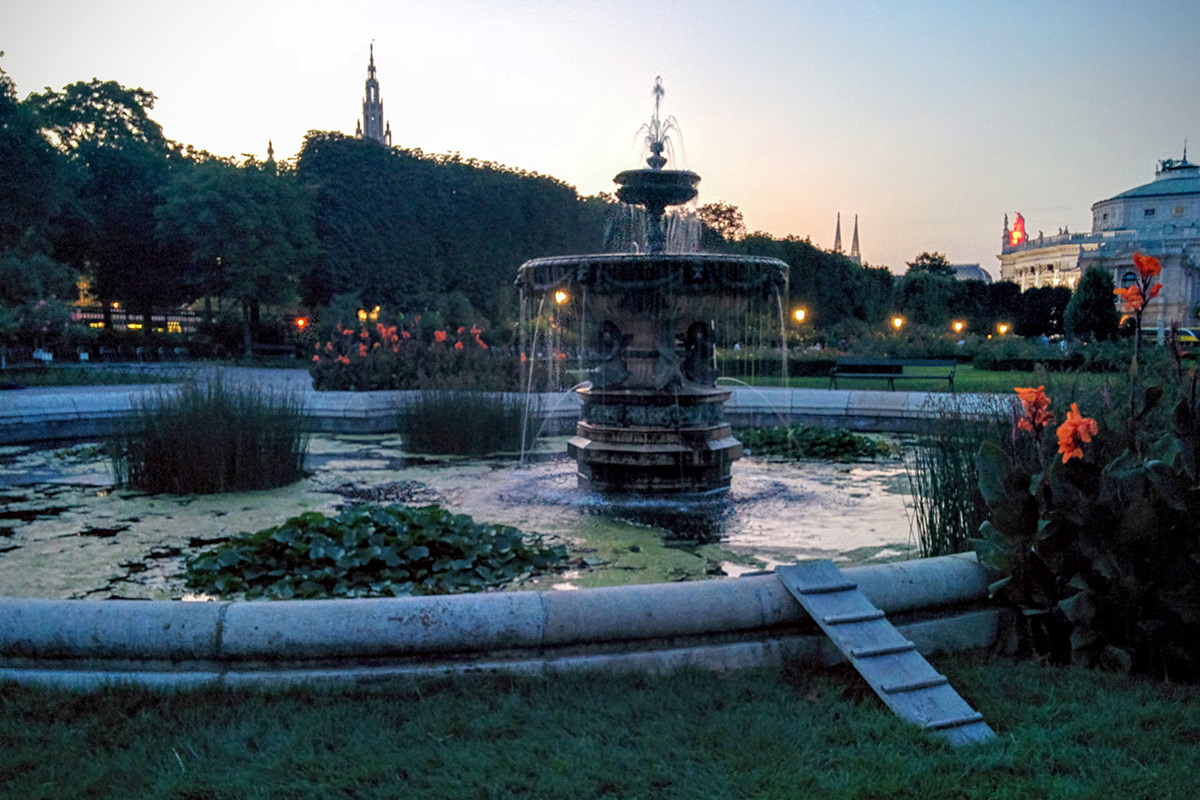 The fountain at Volkgarten. Photo by Justin van Dyke / Flickr. 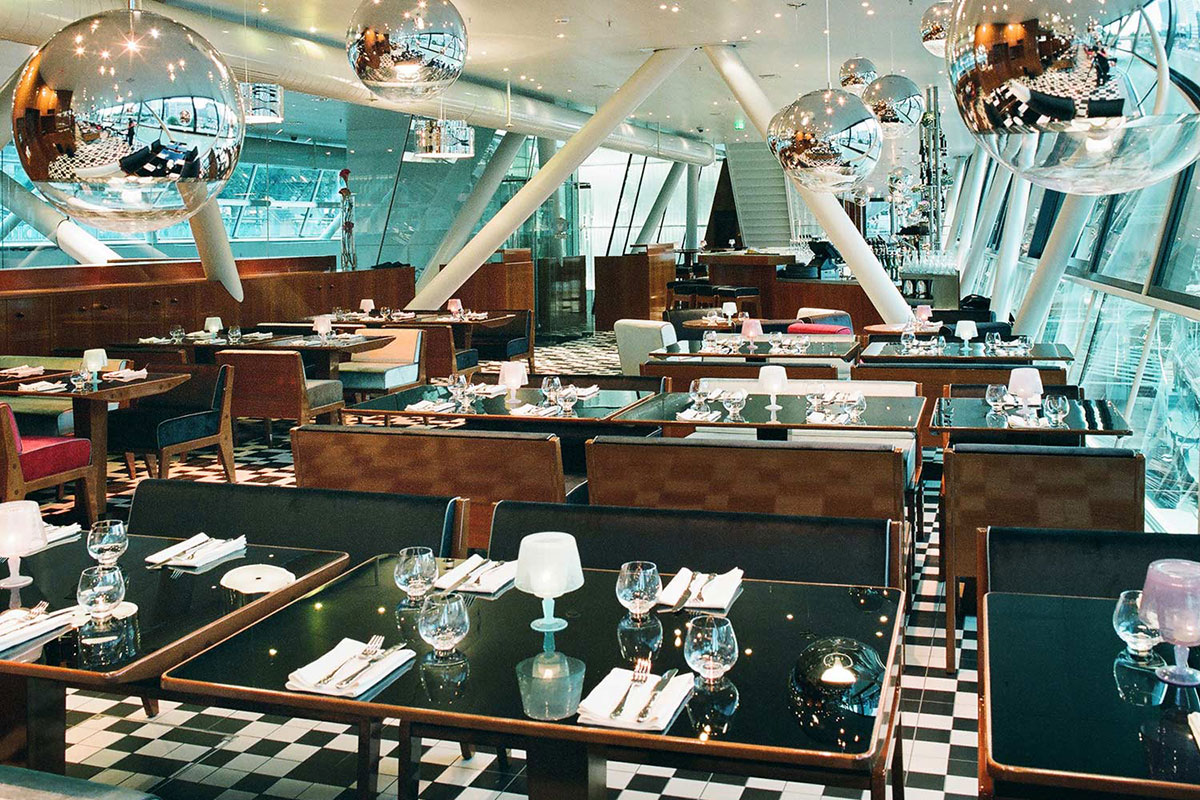 Dining room on the Danube. Photo courtesy of Motto am Fluss.

Stroll to the beautiful Habsburg Palace, flanked by two of the city's most beautiful gardens: Volksgarten and Burggarten. Walk through Heldenplatz, where Hitler declared his annexation of Austria, and toward Ringstrasse.

Take either the tram on the Burgring or catch an Uber and head to the third district. As you travel counterclockwise along the Ringstrasse, look for Vienna Staatsoper, where the great Viennese romantic composer Gustav Mahler was conductor and music director from 1897 to 1907. And where Josef Krips, one of the opera's most important conductors, founded the Wiener Mozart Ensemble.

SEALED WITH A KISS

Finally, arrive at Upper Belvedere Palace (Prinz Eugen-Straße 27, 1030). At the heart of the permanent art collection is the work of Gustav Klimt, the most prominent member of the Austrian Secession movement. My favorite piece is, of course, The Kiss, an intimate portrait of a couple in a close embrace. Klimt's other sparkling jewel, Adele Bloch-Bauer I, was commissioned by the subject's husband, a wealthy Jewish businessman, in the late 1800s. That painting, which used to hang on this same wall, was successfully repatriated back to the heir of the Bloch-Bauers.

It's a heavy history, but there's much to celebrate in the city today. Appreciate it from the vantage point of Motto am Fluss (Franz Josefs Kai 2, Wein 1010), a yacht on the Danube Canal. Excellent views. Relaxed atmosphere (1950s-inspired Venetian design). And, of course, wiener schnitzel.

In Praise of the Viennese Coffehouse