Fathom contributor Liza Foreman recently criss-crossed her way through Kyoto and returned with a bike tour of the city, as well as an evocative retelling of two quintessentially Japanese experiences in the ancient former capital.

KYOTO – The trip got off to a Japanese start. I spent the night before my flight in the Sofitel London Heathrow, overlooking a Zen garden. But it was nothing compared to the real thing, I realized, as I sat upriver in Kyoto a few days later, the water gushing by me.

It was late, and as the day came to a close, I could hear the sound of chanting floating over the emerald green waters that flow between the mountains in Arashiyama, a leafy area in the northwest of the city that has long served as a summer getaway for the wealthy Japanese.

This is where I was to spend a few days.

AROUND THE BEND IN ARASHIYAMA

I sat on the rocks by the Hozu River, nestled beneath the mountains, looking at the silver rooftops and dim lights of Tenryuji Temple hidden in the bamboo forest across the bank. I could hear chanting coming from the temple-filled grove, a highlight of Arashiyama.

A bubble of sound from a narrow boat packed with tourists on the Hozugawa River Boat Ride drowned out the chorus. The vessel emerged from the rapids to rest on the banks after a two-hour trip from Kameoka, a small town upstream.

Like a bird swooping after its prey, a boat selling hot rice balls and dark green ocha tea darted across the river to meet the new arrivals. Joined together like mating birds, the boats disappeared toward Togetsukyo Bridge. The sounds of women's prayers became audible again, mixing with the voices of hikers hidden behind the trees. 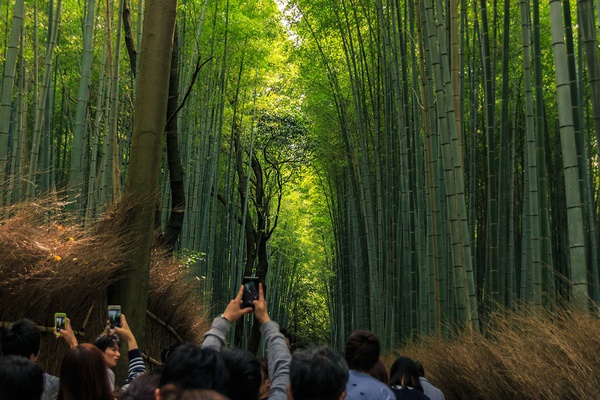 Small lights appeared on the narrow path running along the bank where I sat. A diminutive van delivered new arrivals to Hoshinoya Kyoto, the secluded retreat where I was staying, a former merchant villa turned luxury ryokan. They alighted and walked up steps of dark river stone, wet from the waterfall that surrounded and protected this hidden enclave like a moat circling an English castle. The retreat has become one of Kyoto's best kept secrets, and is rumored to have the city's most expensive rooms.

I had arrived to the resort that morning in the same small van, the river too high to travel by boat. Folded pieces of paper scribbled with wishes hung from a tree overlooking a stream, where a musician played the chimes to welcome guests. It was Japan's annual day for wishes.

I stayed for two nights at a mini-villa at Hoshinoya. Inside, a giant futon covered a large platform over the water. I had my own cedar tub, traditional Japanese board games, and dark green teas. Aya, my host, showed me how to play the games, which she learned as a child, before bowing and leaving me to unpack.

I joined a group by the river for a tea ceremony, where a young man kneeled and served tea in a ritualistic style. We perched on cushions by the water and held a small bowl of matcha, which was whisked in front of our eyes like a holy gift from above. In a wooden building nearby, guests took part in an incense ceremony. Ladies wore yukata (summer kimonos), perfect clothing for Japan's July heat.

The outfits were also fitting for dinner. The fifteen-course haute cuisine kaiseki meal (a delicate menu so finely presented it looks like art), was served at the teahouse restaurant at Hoshinoya, by executive chef Ichiro Kubota, who worked for three years in France at Georges Blanc. He was also the executive chef of Umu, the first kaiseki restaurant in England.

The dozens of tiny dishes he served looked and tasted like works of art. Small river fish, winter melon, house-made soba noodles, tiny pieces of finely sliced steak, an array of exotic vegetables, thick soups, sauces, and grilled fish provided a treat for the senses. As I opened the windows to let the sound of water inside, insects flew through the gap, the buzz of their wings blending with the sounds of feasting in the next room. Back in my villa, I sat gazing at an artfully illuminated tree outside my window before falling asleep. 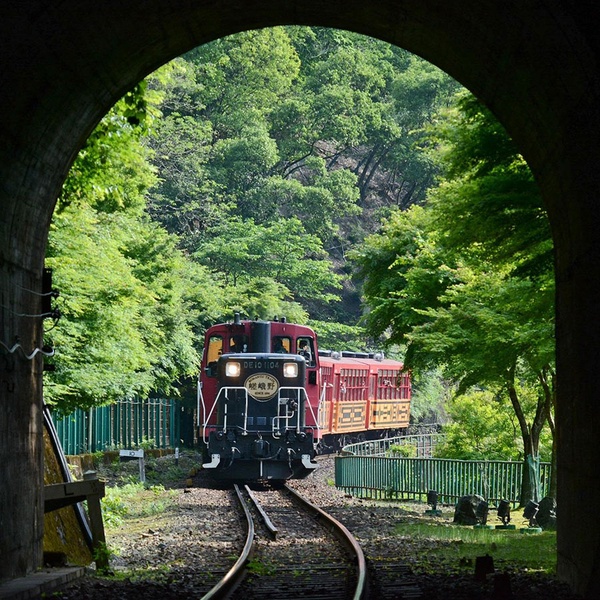 I woke the next morning to the distant toot of a tourist train passing on the other side of the river and enjoyed a kaiseki breakfast in my room, which included elaborate dishes of tofu, soups, fish, rice, salads, and vegetables.

Aya dressed me in a summer kimono before I left to join the throngs of tourists in the fabled bamboo forest across the water. I wandered a series of pathways that led between the old temples and Okochi Sanso Villa, which once belonged to a famous Japanese movie star.

I boarded the Sagano Scenic Railway from Saga Arashiyama Station and got off at the first stop, Torokko Arashiyama, which had been recommended for hiking.

On the other side of the station bridge, I found a group of locals chatting inside a shack-like café. They sold drinks and snacks and, after asking if they did lunch, kindly shared their own food with me for pennies: rice, eggs, grated daikon, and soup. After my meal, I tried to find a nearby temple that I spotted on a fading map on the side of the winding trail road.

After a while, I found myself standing in the middle of nowhere on a road with hardly any traffic. I stuck my thumb out at the sight of the first car and easily hitched a ride with a young family. After all, it's not every day that locals find an English girl in a yukata wandering through the mountains.

Soon, we realized there was no temple to be found. Instead, the couple (chef Yoshio Mizutani and his wife) invited me to join an afternoon trip to see a friend living in the hinterlands of Kyoto.

Their friend was Jun Tomita, a textile designer who creates Ikat rugs so prized that the late Steve Jobs purchased one. His work is also collected by MoMA in New York and is hanging locally at Tawaraya, the city's most expensive traditional ryokan.

Tomita's workshop, a converted greenhouse, was set in the sprawling pastoral landscape of the northern mountains, twenty minutes from Arashiyama, an area as heavenly as the city's ancient temples. Inside, I found balls of wool and old weaving devices, half finished rugs, and dyes. We had tea in his old farmhouse before the couple dropped me back in the city.

These are the adventures that real friendships are made from. The next time I came to Kyoto, I called Jun and we had dinner at Il Piatto, a tiny six-seat restaurant run by the kind people that picked me up that day. 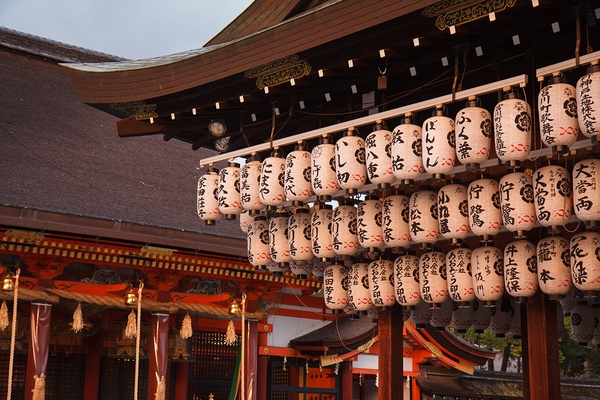 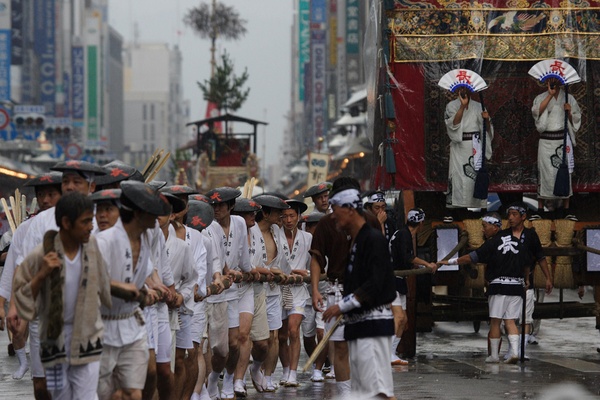 THE BIGGEST PARTY IN JAPAN

I was in Kyoto to see Gion Matsuri, Japan's most famous festival. It lasts for the month of July and peaks with Yamaboko Junkō, an ostentatious parade on July 17 that ends in Gion, the historic heart of Kyoto, home to geisha and cobbled lanes, bars, tea houses, restaurants, and old wooden houses.

For three days before the procession, floats are displayed in the center of town, and some locals open their homes to show their treasures, art works, and shoji screens. When the parade begins, floats draped in gorgeous decoration roll through the streets on wooden wheels, pulled with ropes by teams of men in traditional costume. Elaborate contraptions wrapped in old silk screens carry young musicians playing flutes and tinkering on bells.

The procession ends in the evening with a second parade designed to return a deity to Yasaka Shrine at the top of Shijo Street, the main street in Gion, a magical road filled with old lanterns and alleyways leading into the Kyoto of old.

For those visiting outside of July, Gion, a twenty-minute train ride south from Arashiyama, has some of the city's most romantic streets, many of which are hidden around Maruyama-koen Park. Shoren-In temple holds nightly light shows every spring and autumn, and Kodai-ji temple has a small bamboo forest, rock garden with sand sketches, beautiful gardens with reflective ponds, and an eerie graveyard. As dusk falls, rice balls are grilled on the street and geisha gather at food stands at Maruyama that appear during Cherry Blossom season. 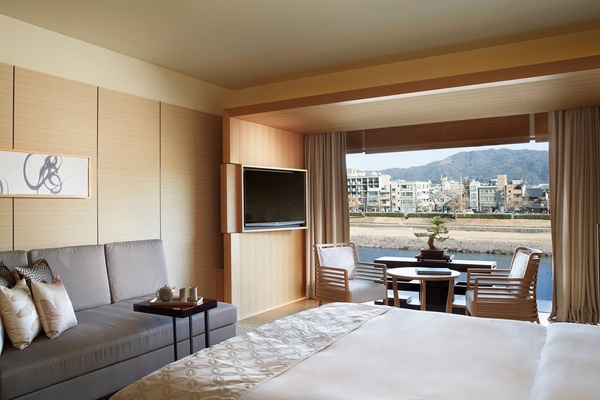 Kiharu (595-2 Fujinishicho Nakagyo-ku; +81-75-708-2768), near Nijo Castle, is an insider venue serving modern, vegetable-heavy Kyoto cuisine. Kitcho, the old-school spot I visited in Arashiyama, is one of the most legendary restaurants in the city and serves kaiseki cuisine while entertaining with kimono-clad geisha. I had dinner there with Hiroshi Osaki, the laid-back mogul behind Yoshimoto, a media company that manages over 6,000 comedians. We ended the night in the heart of Gion, jumping between geisha bars on Shimbashi, one of the most romantic streets in Asia.

Kinmata, located in the center of Kyoto, is a stone's throw from the fabled food market Nishiki. The old ryokan, with its old wooden interiors and busy kaiseki-serving kitchen, channels the old serenity and beauty of Kyoto and feels like a family home.

Okura is another luxury hotel in the center of Kyoto with a grand lobby (the place to rest your feet), great pool, various restaurants, and a take-out joint that sells sushi in artful boxes. I've spent many nights at their bar washing down sausage and chips with hot sake.

The Ritz-Carlton Kyoto, recently opened on Kamogawa River, is the poshest and most expensive contemporary residence in town. The hotel has newly structured luxury rooms with old-world style (mine overlooked the water and mountains), a Japanese restaurant, and a wonderful spa with hot and cold tubs and a slither of a pool. At check-in, I was served a delicate green tea and desert. For lunch, I had a tenderly cooked piece of Kobe beef and delightful vegetable dishes at the luxurious lobby restaurant. After a night enjoying the tub and the bountiful box of bathroom goodies, I reluctantly left my room for a quick breakfast, taking advantage of the rainbow of juice they served, before dashing to the airport.

Kyoto is approximately 30 minutes away by train from Osaka's Kansai International airport (KIX), the only international airport servicing the region. There are multiple trains connecting the two cities. Click here to find out which train is right for you.