Jackson Hole, Wyoming, sees millions of tourists in the summer due to its proximity to some of America's best national parks. In the winter, the landscape is powdered, peaceful, and full of elk. Jean Tang shares her off-piste itinerary.

JACKSON HOLE, Wyoming – Like many, my first trip to Jackson Hole was during the summer. I rode bikes, hiked gravel trails, day-tripped to Yellowstone, went fly fishing (or tried to, at least), and took the tram to the town's largest ski resort for a meal. Now that I've been in winter, I'd recommend it for relatively quiet (400,000 visitors versus millions) and thrilling adventure.

Jackson Hole is positioned at the gateway of Grand Teton National Park, not far from Yellowstone. In winter, skiing is the primary draw. There are three ski resorts. The largest, Jackson Hole Mountain Resort, is located in nearby Teton Village and has 2,500 acres of in-bounds terrain and nearly the same out-of-bounds, which is permitted although not patrolled. And they're no joke: Half are thrillingly advanced.

Locals have seen an uptick in winter sports like snowmobiling and snowshoeing, though the scenery and the sophisticated town that feeds on it justify the visit alone.

Flying into Jackson Hole Airport is a treat: The newly expanded structure retains the feel of a massive ski lodge framed with recycled beams. Stepping outside, you're greeted with a jawdropping sight: The rims of towering mountains, the highest nearly 14,000 feet. The three dominating peaks, nestled with the airport in the lower half of Grand Teton National Park, command a formidable line-up capped in white.

From the airport, it's a fifteen-minute straight shot on US-191 to Jackson and twenty minutes more to Teton Village.

Ski at Jackson Hole Mountain Resort. The trails are looong, the snow is powdery, and the restaurants are scrumptious. But the best reason to ski here is that it'll push you beyond your limits, especially if you think you don't have any. The right side of the trail area (Après-Vous Mountain) is largely blue, and, speaking from experience, a long, winding cat-track can get you down handily in a bind. The left side (Rendezvous Mountain) is mostly advanced and includes regular black diamonds plus eye-popping jumps and chutes that quickened my pulse from glimpse alone. A word of caution: At an 11,000-foot top elevation (6,500 at base), you'll feel the altitude. Imbibe lightly, hydrate well, eat a protein-rich breakfast, and take it easy on your first few runs. 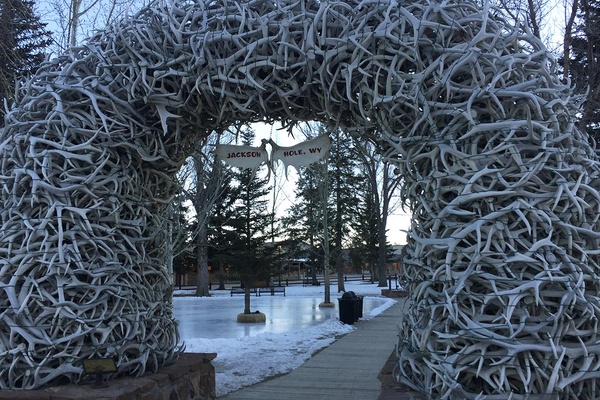 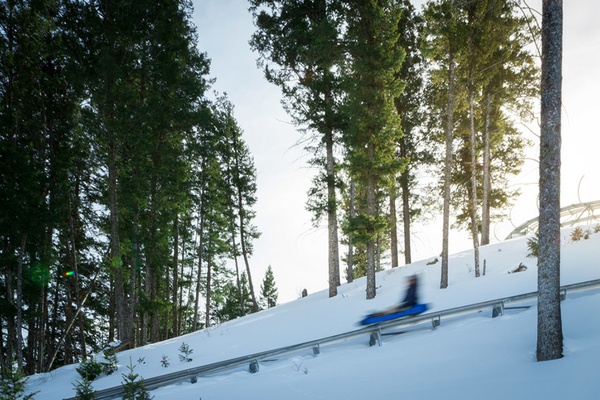 The Cowboy Coaster in action. Photo courtesy of Snow King.

WHAT TO DO OTHERWISE

The park in the town square is flanked by archways shaped from elk antlers. (Elk naturally shed their antlers, so no elk were killed in the making of the arch.) Surrounding it are dozens of boutiques that sell upscale winterwear, adventure gear, jewelry, art, and pastries. Underfoot are boardwalks reminiscent of the cattle town that Jackson Hole once was.

Snow King, a smaller ski resort within walking distance from town, recently invested nine million dollars into its new Cowboy Coaster. Strapped in, you're whisked 700 vertical feet up a track. Then you speed down, luge-like, over a mile of winding and sideways-turning hills and loops. Technically, riders can control their speed, but it's better to leave the brakes off and just fly.

Learn Biology From a Cowboy

For $21 per person, a pair of hardy draft horses will tug you and eleven others on a sleigh (really, a wagon fitted with benches, blankets, and a cowboy teamster) into National Elk Refuge, a 25,000-acre outdoor sanctuary set up by the government to ensure the survival of the elk population. There's no question they succeeded. Within minutes, you're surrounded by hundreds of bulls, cows, and calfs. Our teamster Michael told us how elks defend themselves against wolves and coyotes, digest their food, and compete for mates.

Go On a Wildlife Safari

Not content with elk, my animal-loving boyfriend and I booked a safari with Grizzly Country Wildlife Adventures. Daryl Hunter, who leads the tours, is also a wildlife photographer (see his photos here), and gave us tips about iPhone photography and flawless vantage points. During the four-hour tour, we hit the northern end of Grand Teton National Park and spied three moose, two fox, a handful of bighorn sheep, some distant bison, and the cabin in Shane, the western classic. Daryl brought a wildlife viewing scope, though we didn't need it for the bull moose we spotted at the end of our tour. It was just a few feet away.

The new Wild West Shooting Gallery at Jackson Hole Toy Store is a great way to cap off a day on the mountains. The compact, wireless setup includes impressively weighted guns, a point system with prizes, and 40 challenging, animated targets (talking bison head, dancing cowboy boots, whistling train). Although intended for kids, grown men are the most frequent players, according to owner Corey Cook. We played, lost, and bought ourselves sock puppets as a consolation prize. 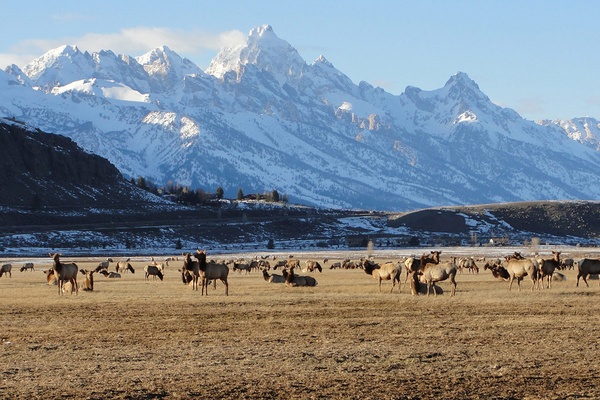 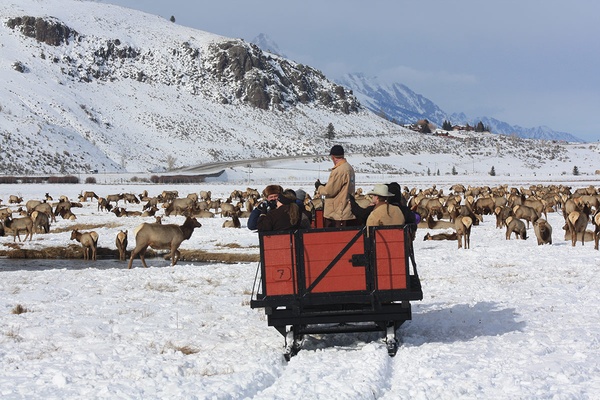 The sleigh ride. Photo by Lori Iverson for USFWS / Flickr.

Hotel Jackson
Opened in summer 2015, this hotel gets the details right: powerful showerheads, softened water, movement-sensing privacy lighting. There's a gas fireplace in every room and a legitimate hotel restaurant with wood-burning hearth next to the front door.

Four Seasons Jackson Hole
At the bottom of Après Vous Mountain, this surprisingly large (124 rooms and suites) edition of the luxury hotel chain puts you in the center of the action. The amenities are top-notch, and the décor is cowboy luxe.

Persephone Bakery
Tiny wildflowers adorn the tables and the pastry case is billowing with baked goods. My own two-course breakfast included a bulbous cinnamon brioche, unpeeling into bready, spiraling layers, and a side of sweet potatoes and brussels sprouts topped with a runny fried egg. The café also sells lunch and loaves of fresh-baked bread.

Rendezvous Bistro
The start of a local restaurant empire owned by Chicago native Gavin Fine, Rendezvous has been around since 2001. I recommend the classics — delicate mussels, briny raw oysters (North American, not French), buttery escargots, demi-glace laced meatloaf, and butter lettuce salad dotted with candied walnuts and slivers of orange.

Bin 22
What a brilliant idea: A wine bar built amidst rows of wine on sale, available for opening and serving on the spot. The entire restaurant is served by a wine list hundreds of bottles long, and the accompanying menu — thin-sliced charcuterie, unique cheeses, hand-pulled mozzarella — is built to suit. 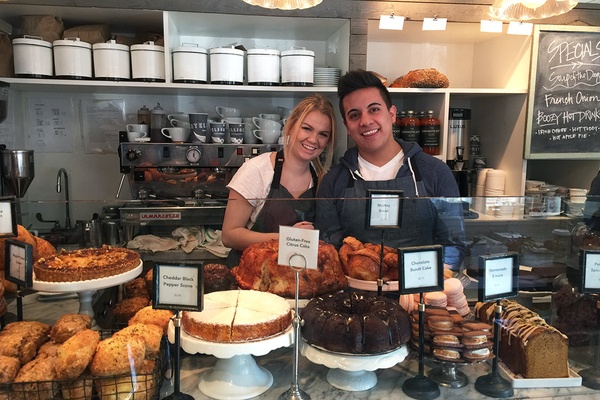 A portrait at Persephone. Photo by Jean Tang. 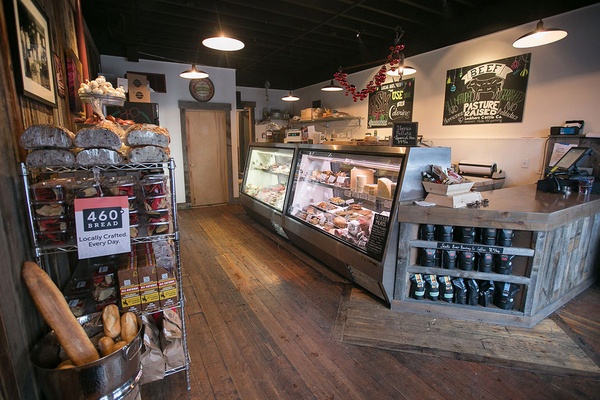 Piste Mountain Bistro
The resort's newest eatery marks a nice rest at the top of the gondola. Flanked by three other options (from a deli to fine French dining), Piste strikes a balance with comfort food. I couldn't stop noshing on twice-fried sweet potato fries or veggie mac-and-cheese, the day's mac-and-cheese special. Crispy salad is a colorful venture: Three types of kale on a bed of mashed sweet potato.

FIGS
Located in Hotel Jackson, this restaurant blew me away. Inspired by the owners' Lebanese origins, the menu is Middle Eastern-influenced and includes zatar-spiced wild sea bass, chunks of sweet potato topped with muhammara (think Syrian or Turkish pesto, which may sound strange, but was the fastest shared dish to disappear), and seared sea scallops half the size of your fist drizzled with green chermoula, an herb marinade from Tunisia.

Many larger airlines have recently expanded their schedules to fly direct to Jackson Hole Airport (JAC) from dozens of major cities. You can also fly to Idaho Falls airport (IDA), but the four-hour round-trip drive isn't worth it.

Rent a car only if you plan to travel between Teton Village to Jackson. We got one, but staying at Hotel Jackson meant having both a private town car and driver for rides within a ten-minute radius and group ski shuttle, which makes trips daily at 8:30 and 4:30. You can also hop the START bus, which is $3 one-way between the Village and Jackson.

Our four-day February trip was three days of brilliant sunshine, a light overnight snowstorm, and lovely mountaintop snowfall. Even if it rains, it's still wrenchingly beautiful. Bring layers, especially in the hotter months. Temperatures can plunge as much as 25 degrees at night.

Jacksonites are some of the friendliest people you'll meet, even tipping their hats to say hello. Bring your nicest flannel, any fur accoutrements, and hiking/snow boots. Leave the heels at home.

Where Should You Go Skiing?
U.S. Road Trips: The West
The Kid Loves the Dude