Would you rather travel with a big group of friends or all by yourself? If traveling solo sounds terrifying, that's because you haven't realized why it can be the best way to go.

I don't really have an excuse to travel alone anymore, and I miss it.

I miss the times when I'd check in for a flight and let my eyes wander around the waiting area at the gate, trying to guess who my seat-mate would be. I always hoped I'd make a friend, yet still asked for a window seat, so I could stare out the window instead of having an unwanted conversation if my neighbor turned out to be a dud, which is what usually happened. I always got paired with the most unappealing partner, one whose body mass — or, worse, smell — would expand over the arm rest into my territory. Even then, it was something to write about, to chuckle 0ver silently.

The best conversation always turns out to be the dialogue you have with yourself.

When you're alone, every moment is an opportunity for something exciting to happen. There's nearly always room for one more, but usually not for two.

The first time I traveled alone, I flew to London and took the Eurostar to Paris, where I was studying abroad. It was a transformative two-hour train ride because when I woke up, it was suddenly snowing and everyone was speaking French. When I ran my belongings through security at Gare du Nord, I unknowingly dropped my passport, only to have a stranger pick it up for me. The kindness of strangers shines through when you're freed from a set tribe of friends, marking you as one of their own. When you're alone, you belong to everyone. 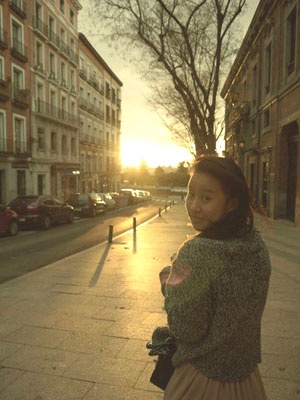 There are other perks of being a party of one. Like stopping to take a photograph without making anyone wait. Creating your own itinerary on your own whim. Eating wherever and whatever you'd like without a debate. You can walk away any loneliness and realize that sometimes it's nice to keep quiet and just observe.

Who am I, undefined in this foreign environment? Maybe I'm a tourist. Maybe I'm a mysterious passerby. Or maybe I'm just another person searching for connection. Just like everybody else.

The second time I flew solo, I went to Hong Kong with a duffel bag and checked into the Geo-Home Holiday hostel. My room was the size of a jail cell, but it had everything I needed. I was free to go and come as I pleased. I wandered the city alone and I felt like I was trapped in someone's dream, or in a movie, or in a universe where I was invisible.

The next morning, I woke up, got my hair washed, and ate fried shrimp balls on a stick with spicy sauce — all for less than two dollars. I spent the rest of the day wandering around Lan Kwai Fong, stopping to eat delicious bubble tea, then an egg tart, then street-style shark fin soup with a BBQ chicken leg. I went to Modern Toilet for dinner and thought about the Mary Douglas book, Purity and Danger, wondering why anyone (myself included) would want to eat in a restaurant that had a bathroom theme. Curiosity, I guess, is what lured me in.

Afterwards, I continued to wear down my summer sandals, my eyes growing weary from the flashing neon lights of the city at night. When I returned to my tiny quarter, I found the owner of the hostel, a bug-eyed woman named Miss Kitty, waiting up to tell me with concern that my mother had called. I thanked her and went to my room. When I started to dial home, I realized that a few more hours of worrying until a morning call wouldn't kill my mother. I slept more soundly that night than ever.

Traveling alone is so underrated. Is it because we are so desperate to stay connected, afraid to be on our own and make our own decisions? Do we need other people to validate our good times?

Inset photo: The author in Madrid.