On a tour through the grape groves of Croatia, Kristin Vuković connects with her motherland through stories from the vine.

DALMATIA, Croatia – The steep vineyards on Croatia's Pelješac peninsula appear in the distance like a darkened landscape, undulating high above the turquoise Adriatic Sea. But it is the end of summer, too soon for the changing colors of autumn. As we approach the town of Trstenik, surrounded by pine forests, swathes of blackened branches and burnt leaves create a desert of skeleton trees. Emergency crews are still clearing the road where a recent fire ravaged the land, destroying nearly 600 hectares of precious vines. No one knows whether arson, recklessness, or Mother Nature is to blame.

"My husband said the fire goes faster than he goes on his motorcycle," said Dražena Vučković, who works at Grgić Vina, founded in 1996 and located in Trstenik on Pelješac, a finger of land near the Dalmatian city of Dubrovnik. The winds were strong that day, and the fire spread quickly. The flames claimed ten percent of Grgić's vines and approximately 22,000 bottles of stored wine — primarily the 2010, 2011, and 2012 vintages. The 2013 harvest was, thankfully, still in barrels and salvageable.

Smaller producers in Trstenik gathered at Grgić's winery and slept outside, believing it was a safe haven, until the fire ultimately reached there, too. For boutique producers, the fire was devastating. Many lost entire harvests, and the charred vines would taint some future harvests, producing smoky grapes unsuitable for making wine. "Most people on Pelješac live from the grape and olive trees," Vučković said. Although the fire had occurred weeks before our visit, the air still smelled of smoke. 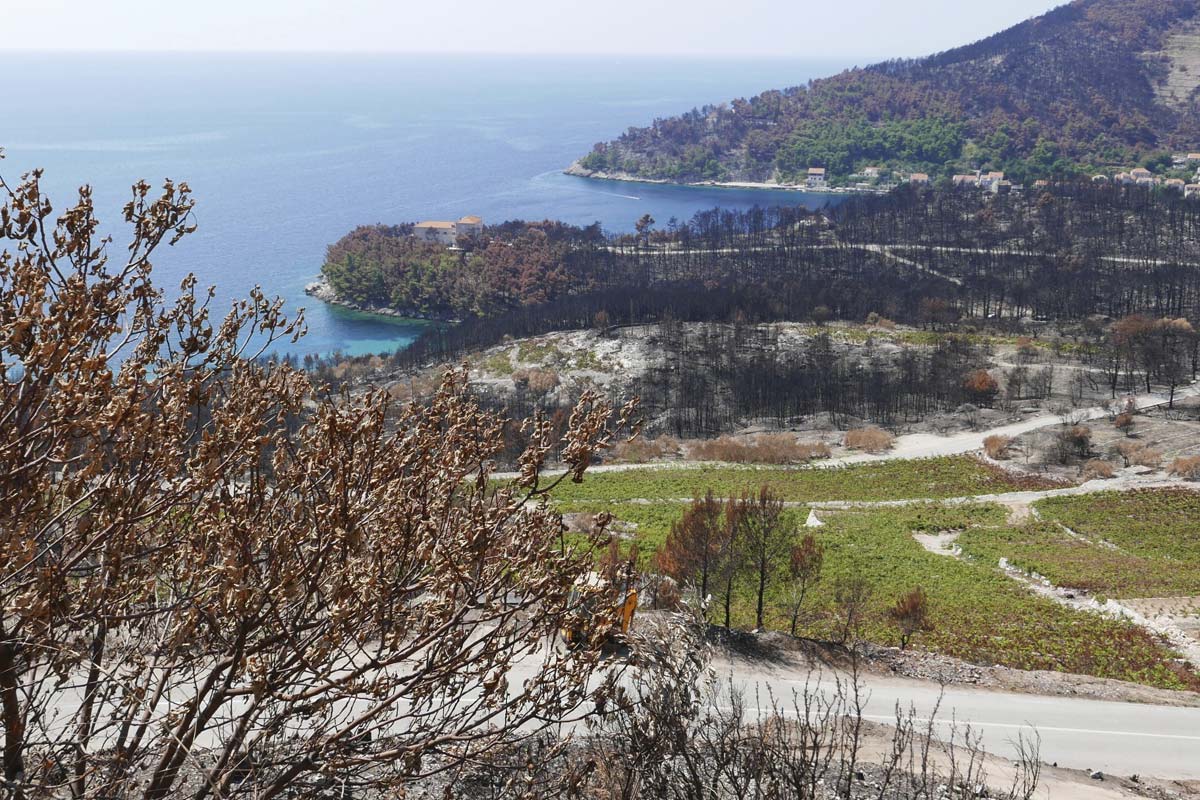 The ravages of fire on the Pelješac peninsula.

On our anniversary trip, my husband and I had come to Grgić Vina to sample their plavac mali ("little blue"), a red varietal indigenous to Croatia. We'd tasted Grgich's Napa Valley zinfandel at Grgich Hills Estate in California a few months before. Prior to co-founding his Napa winery in 1977, Miljenko (Mike) Grgich was the winemaker at Chateau Montelena in Napa, who crafted the 1973 chardonnay that won the legendary 1976 Paris Tasting in a blind judging that beat out France's best white burgundies.

Plavac mali is a relative of zinfandel and one of the most famous varietals in Croatia. When Croatian-born Grgich came to California in 1958, he noticed the zinfandel vines produced wine that resembled the crno vino ("black wine") his father made back in the old country. Many years later, a University of California Davis study determined zinfandel and dobričić, an old Dalmatian varietal, were the parent vines of plavac mali. Zinfandel's roots originate in Croatia, where the varietal is called crljenak kaštelanski. The climates of Napa Valley and Pelješac are strikingly similar: When zinfandel vines were introduced to Napa in the early 1800s, they easily adapted to its terroir.

The coveted Dingač area bordering Trstenik is the prime location on Pelješac to grow plavac mali. Dingač is the oldest appellation in Croatia: It covers five square kilometers, and the land is divided among fifteen producers, including Grgić. Dramatic 45-degree-angle vineyards plummet to the sea, their vines clinging to the slopes like barnacles. Mediterranean sun-drenched days warm the grapes and produce wines with a plush fruit character. 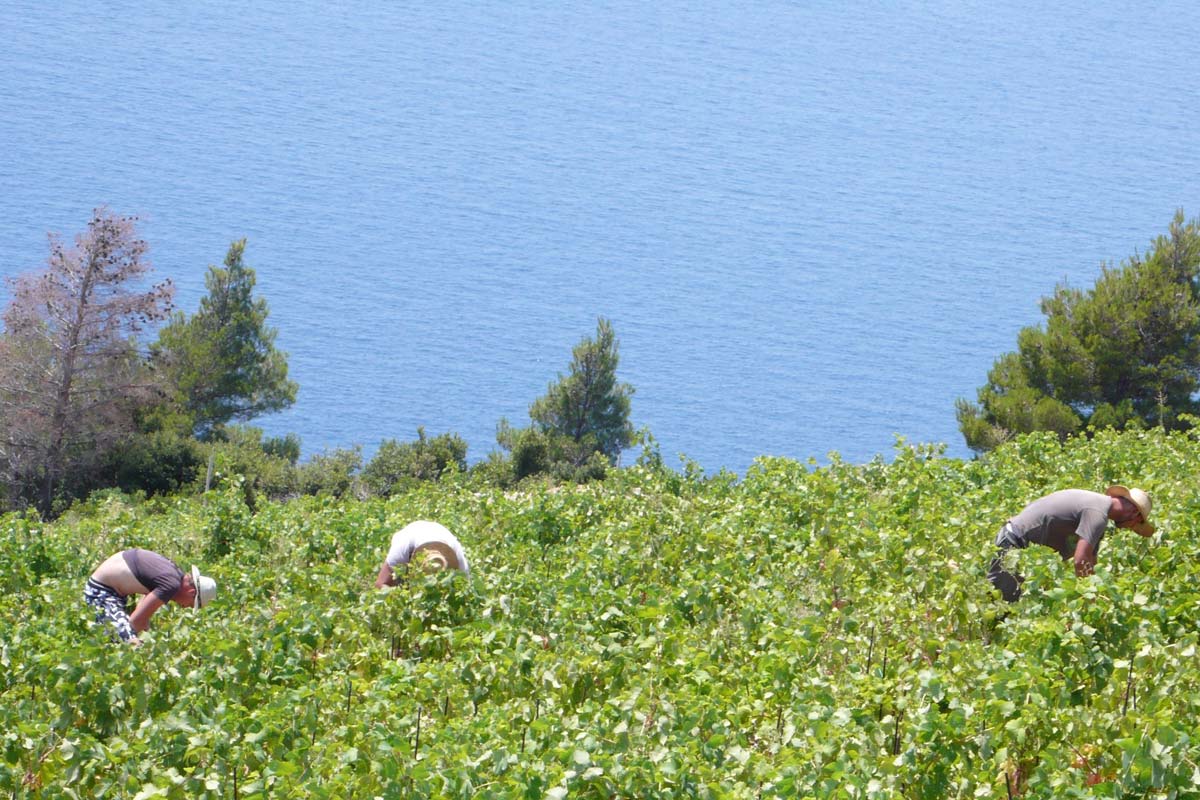 My husband and I followed the Dalmatian plavac mali vines to the island of Korčula, a fifteen-minute ferry ride from the fingertip of Pelješac peninsula. We were keen to try the island's endemic white varietal, grk, which can only be found on Korčula and in select restaurants in Croatia. According to the UC Davis research, the grk varietal shares genetic markers with zinfandel. But grk can't survive on its own: At least 30 percent of a grk vineyard must be surrounded by another varietal — usually plavac mali — because grk only has a female flower and can't self-pollinate.

A local had warned me, "You cannot feel your legs after grk if you drink too much." Nevertheless, we headed to Bire, a winery on the eastern part of the island in the town of Lumbarda, where the varietal flourishes in the area's sandy soils. The path to the winery, perched on a hillside overlooking the village, was lined with large stone columns. Traditional limestone buildings with red tile roofs, which populate the Dalmatian coast, formed a cluster. Frano Milina-Bire, the winemaker and owner, greeted us in the rustic tasting room lined with bottles stacked like sardines. He explained that grk is one of the few varietals with different-sized grapes in the same bunch: The small grapes have more acidity; the large grapes have more sugar. "Grk" means "bitter" in Croatian, but Bire's wine is dry and pleasantly well balanced. Bire produces only 15,000 bottles of grk annually, and, depending on the harvest yield, sometimes less. The area has been producing wine for 400 years, and Milina-Bire estimates that nearly half of the island lives from the vines. 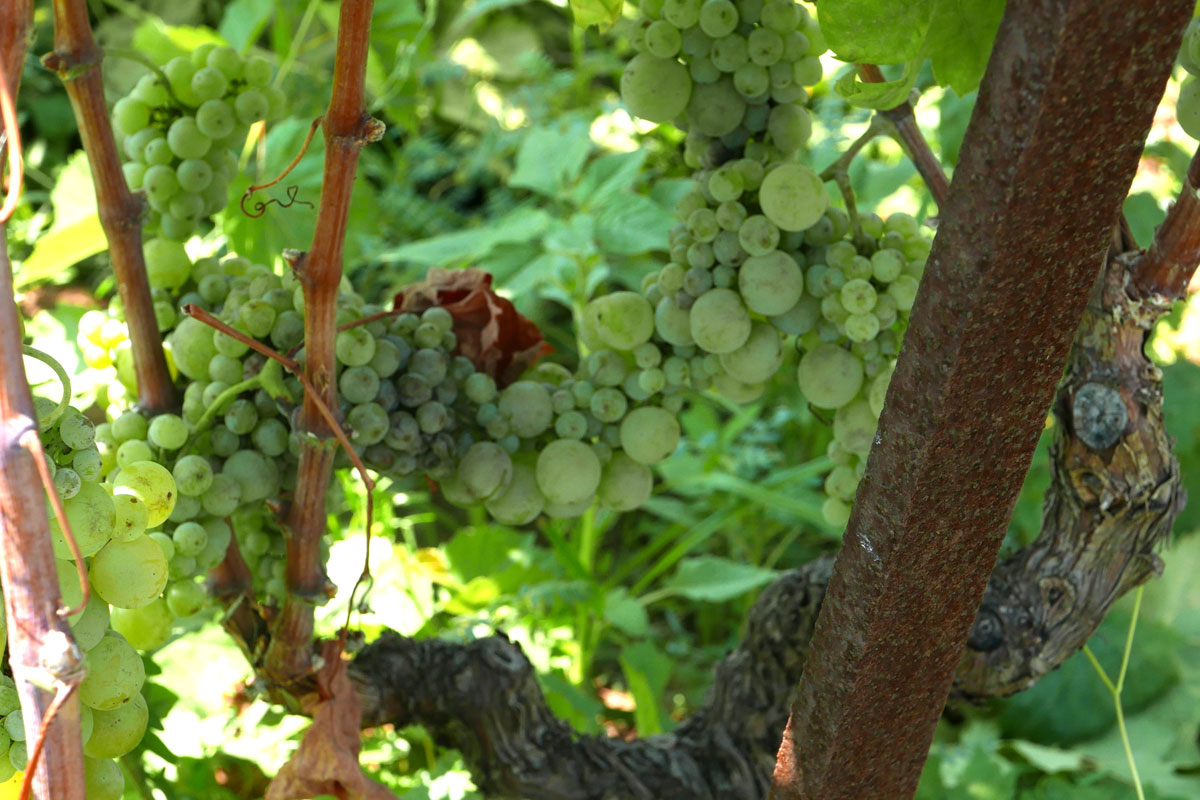 From Korčula, we island-hopped to Hvar, which has gained a reputation in the past decade as a jet-setter island for the celebrities and international moguls that like to frequent its shores. The Greeks brought vines to Hvar 2,000 years ago, giving the island a long winemaking tradition.

Our guide from Secret Dalmatia took us to Tomić, one of the largest producers on the island, in the town of Jelsa. The cavernous stone tasting room is modeled on the basement of Diocletian's Palace, a Roman-era treasure seated on the Dalmatian coast in Split. The winery aimed to tame plavac mali's arrogant nature by creating a softer, more elegant wine. They succeeded: It is beautiful and refined. But plavac mali usually has a very distinctive flavor that sets it apart from other reds. In a blind tasting, I'm fairly certain I couldn't identify this wine as plavac. The plavac mali I know asserts itself, perhaps arrogantly, but with a panache all its own.

Next, we decided to explore the southern side of the island, which produces the best plavac mali grapes because the land receives the most sunshine. Windy roads snaked around nearly naked cliffs. We came to a stoplight at the mouth of a tunnel and waited behind locals who had stepped outside to lean on their cars and smoke.

When the light turned green, we drove through the darkness on a single lane, surrounded by jagged edges created from dynamite blasts that had pushed through the rock. On the other side, sweeping views of the sea greeted us far below. With no particular aim, we drove down a curvy road on a sharp incline to a seaside town. I asked a man on his way to the beach where to stop for lunch. "Zlatan Otok," he replied, without hesitation.

Zlatan Otok, which means "golden island" in Croatian, is another large wine producer on Hvar. I knew the label, with its golden tree silhouette: When we were married in Dubrovnik six years ago, we chose Zlatan Otok's plavac mali for our wedding dinner. Driving down the steep road to the restaurant and tasting room in two round stone buildings on a narrow pier that juts into the sea, I felt myself catch my breath. The lone tree pictured on their label was positioned on a rock formation connected to the coast by a small bridge. Framed by dramatic cliffs, it created a singular, striking image. 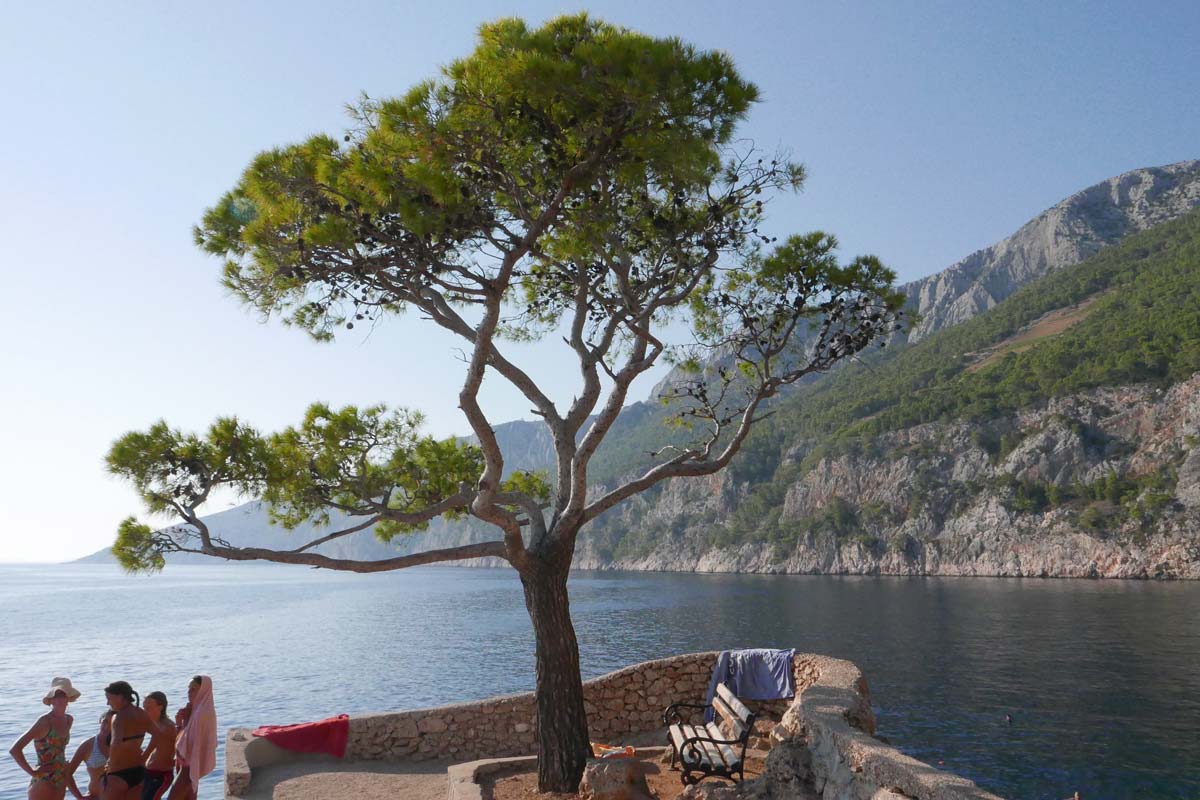 We ordered fresh grilled squid and, of course, plavac mali. Sitting outside on the pier, I savored the ruby-colored wine's rich fruit flavors — red berries, cherries, and figs, with a hint of Mediterranean herbs. The distinctive flavors of Dalmatia, derived from generations of vines that had lived on the rough land.

I thought of my grandparents, who had left inland Croatia when they were young. They had never returned to their homeland and had never seen the Adriatic. As I sipped my wine watching the clear waves lap against the pier, I felt the vastness of the past — like a small seashell that had come to rest on the shore.