Fathom's Pavia Rosati goes sailing around Croatia and decides, once and for all, how she feels about the life aquatic.

DALMATIAN COAST, Croatia – I am a beach, ocean, and islands girl. I like to swim for hours, lie in the sun, watch the sunset on the blue horizon. I like doing these things on a rocky coastline, on a balcony, on soft sand.

I am not a boat girl.

But when I was invited join one of the first Yachts and Friends cruises along the Dalmatian coast from Split to Vis to Hvar, with a few days in Vis to attend the inauguration of Fort George from a decommissioned British military base into a dining and nightclub, I accepted.

Yachts and Friends and Fort George are the latest offerings from European Travel Ventures, which is known for Yacht Week. If you don't know Yacht Week, it's because you aren't 25, single, and looking for a reasonably priced floating party around Greece, Croatia, Italy, and the British Virgin Islands. Yachts and Friends is meant to appeal to an older crowd, one with more refined travel tastes and needs, while still coming in at a reasonable price point. I had no idea how much of a floating party it was going to be.

The sail would begin in the coastal town of Split in the early morning, so my husband and I flew in from Rome the night before to meet the other three passengers, the crew, and our hosts. Dinner was a grand seafood feast at a lovely restaurant on the marina. Lots of Plavac Mali wine, lots of local spirits like deathly Maraskino cherry brandy. Fun.

At 8 a.m., I was in no condition to get on a boat for five hours. But there was no calling in sick, so I made my way onto the yacht and down to my cabin and did my best to lie as still as possible. The less I say about my utter misery on this part of the journey, the better. 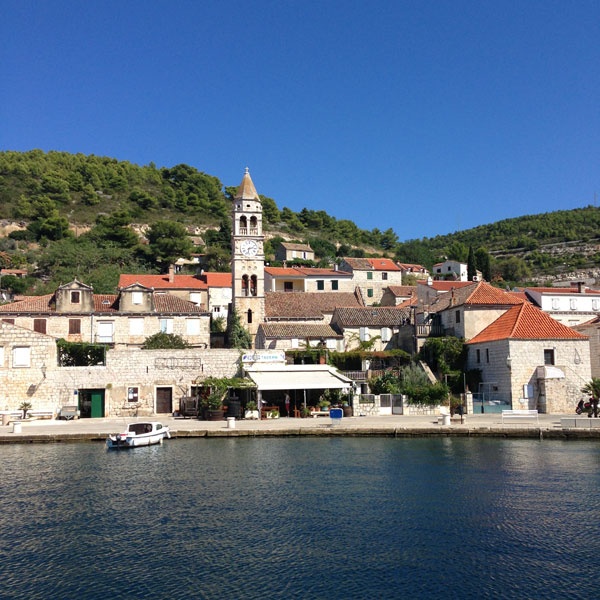 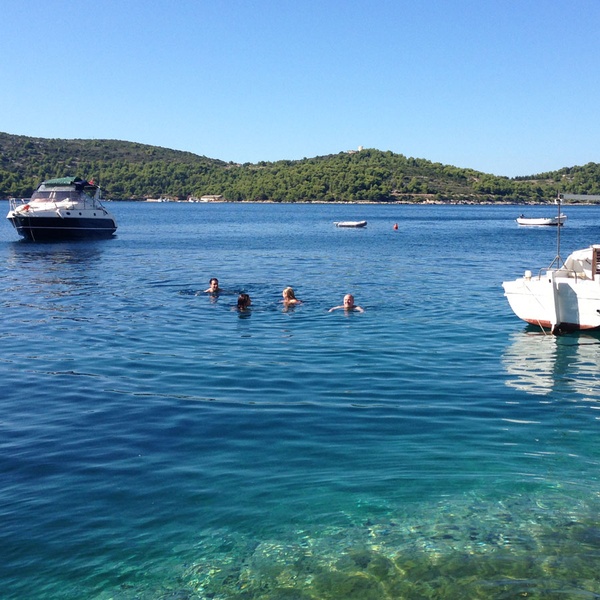 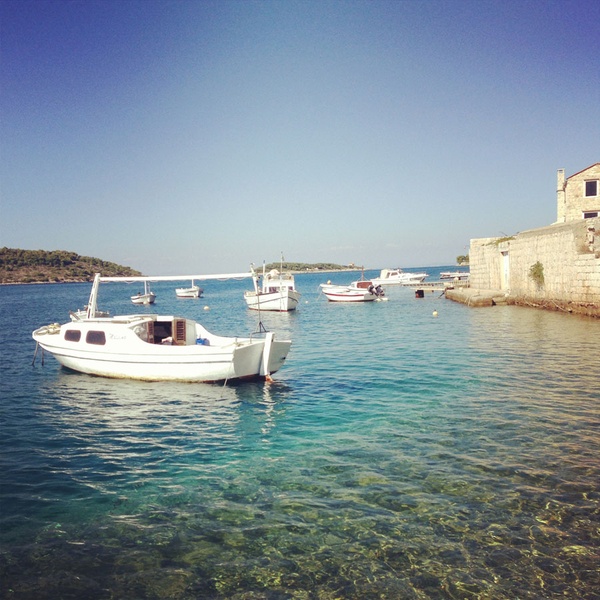 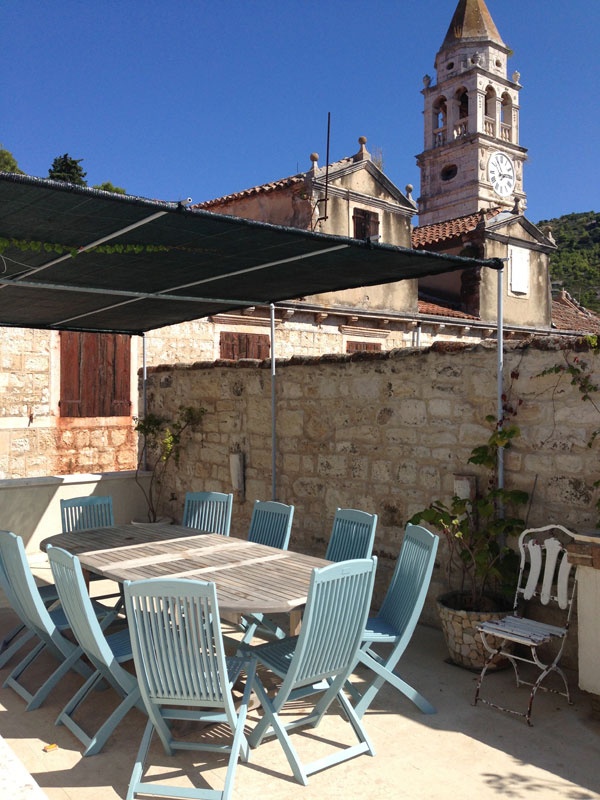 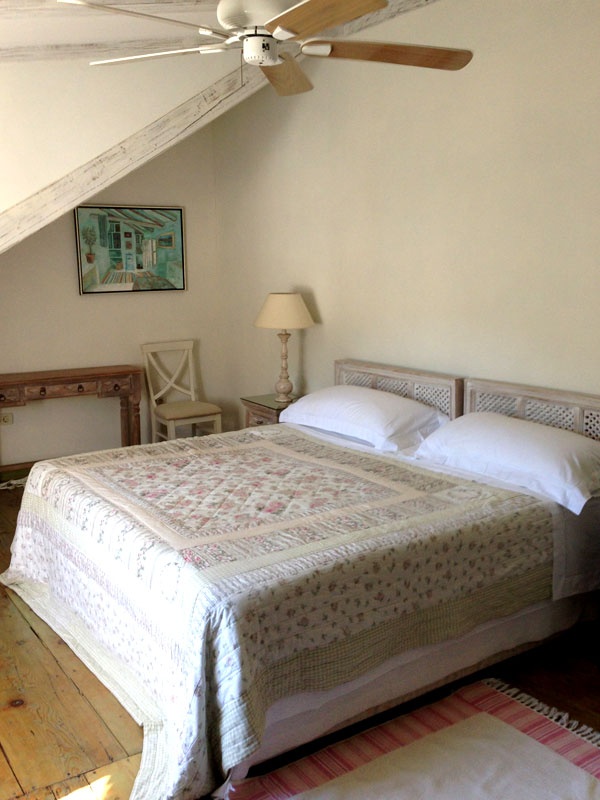 My bedroom at Villa Serena.

I emerged as we were pulling into the beautiful harbor at Vis. Calm blue waters, cream-colored stone buildings with terra cotta roof tiles, a proud church steeple in the middle, green hills in the background. I felt much better. The house we checked into, Villa Serena, consisted of three floors of overstuffed sofas, shabby chic country décor in soft pastels, and a balcony overlooking the harbor. Exactly, in other words, what a beach house should be. It was time for a swim. We walked 100 yards to the edge of the harbor, waded in, and splashed away an hour. 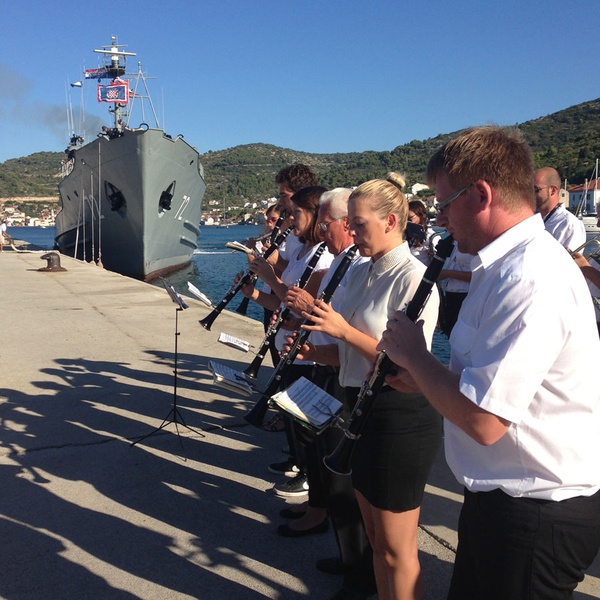 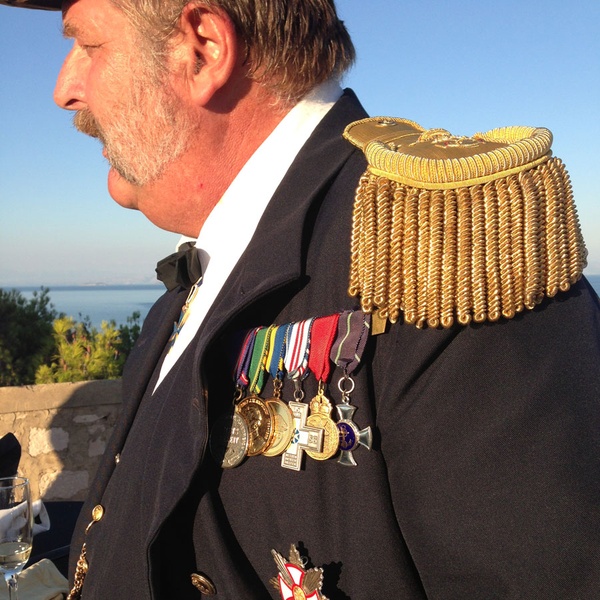 The opening festivities for Fort George kicked off in the afternoon sun in the Port of Vis. The attractive, well-dressed crowd included Brits and Euros who vacation in Vis, locals, and representatives of the Croatian Navy. The Croatian Naval Orchestra played jaunty tunes as the Commander of the Croatian Navy, Komodor Robert Hranj, and the mayor of Vis, Ivo Radica, led the ceremonies, which continued uphill at the Fort with fireworks, more music, speeches, and a grand flag-raising. I'm not often surrounded by so many medals on so many epaulettes.

The British Royal Navy established Fort George in 1813 for its strategic position in the Adriatic Sea. The site has seen more than its fair share of military action throughout history — Austrians, Napoleon — but had recently been abandoned.

European Travel Ventures founders William Wenkel and Erik Biorklund discovered Fort George on a sail along the Dalmation coast, fell in love, and made it their first land-based project. They worked with Croatian authorities on the renovation and included a museum with paintings and military paraphernalia.

But this is clearly built to be a place to party in the open air. To dance until dawn, singing at the top of your lungs with people who were strangers three hours ago. To throw a lavish destination wedding where people get into hijinx they'll be talking about for decades to come. And, good god, what a setting. Under the trees, on a promontory, with amazing views from every angle. If you are here with a group of friends wearing skimpy clothes with nary a care or responsibility in the world, well, congratulations, you win. 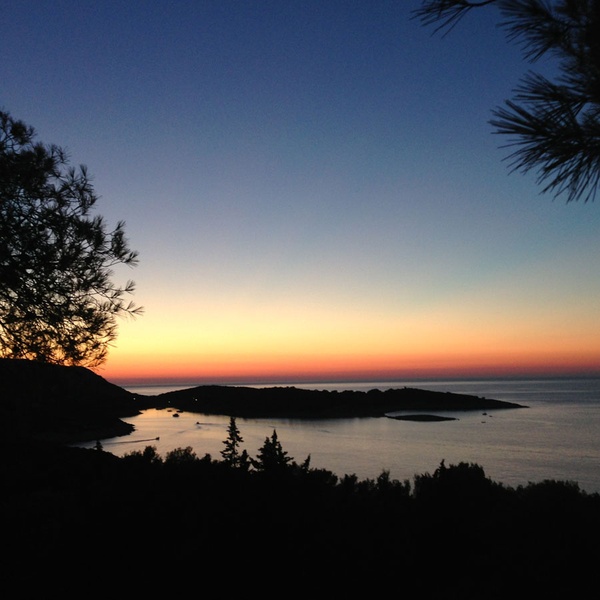 The views from Fort George.

The following day, we took a military tour around Vis led by a kooky guide from Jonathan Livingston Adventure. The guide may have been high. It was hard to tell whether the stories he told about the sites we visited — Greek ruins from 397 B.C.; the house where Josip Tito lived during World War II — were true or bullshit. But who cared? He was entertaining, and this island was just getting better and better, with unexpected reveals and mysteries. The countryside may look calm and peaceful, but the locals joke that every rock on Vis holds a hidden cannon. In fact, there are 13 kilometers of atomic bomb and submarine tunnels on the island.

Equipped with flashlights, we clumbed down into a bunker left over from the world wars. The view out onto the sea was, again, spectacular. There was no one around for miles. Back then, this bunker must have been a picturesque assignment where riflemen could show off their skills. Today, it's proabably where the teenagers come to show off their sexual skills and develop their tolerance for beer.

We climbed back into the Jeeps and drove into the middle of the small island to an abandoned RAF airfield. And by "airfield" I mean "a big field filled with bales of hay." I was bored by this stop, but very excited by what lay ahead: an incredible lunch of grilled meats, cheeses, and wine at Roki's. By this point in the trip, I had become pals with the people I had seen at the Fort the night before — the salty (and handsome) retired British financier who now lived on the island, the artistic (and handsome) musical director of the Fort — and we were all piled into picnic tables, passing platters of food and bottles of wine. We were singing, we were telling jokes, we were doing exactly what you're supposed to be doing on a lazy day in the sunshine when you've forgotten the hangover from the night before. 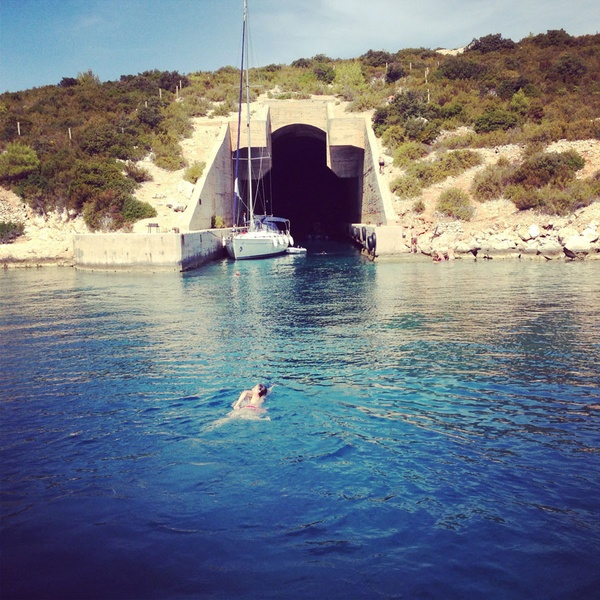 Swimming into a submarine bunker. 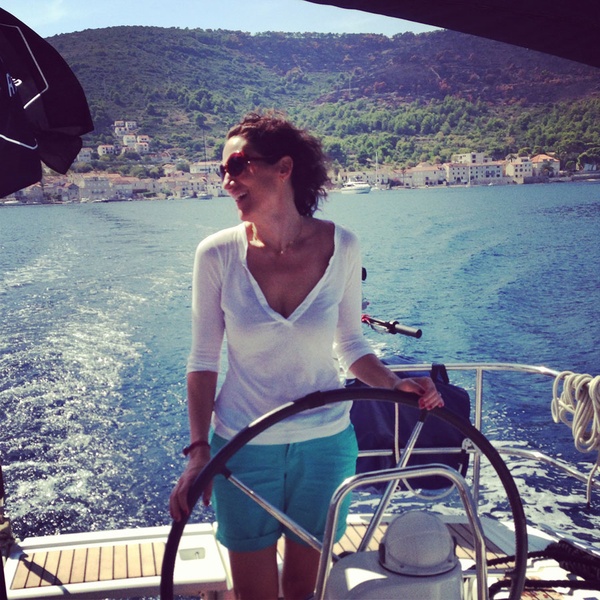 But it was time to ply the waters again. We cruised around Vis and found a submarine tunnel to swim into and jump off. (That's a deep, deep plunge, and I did not attempt it.) We took a dingy into the blue grotto off Bisevo overseen by an officious, thuggish guy who asked for a nominal but annoying "entrance fee." We dropped anchor in an empty cove and sat in the sunshine, playing music very loudly, jumping off the side of the boat. We talked and napped, read books and failed to find WiFi.

That night, we docked in the marina on Šolta island and had dinner at Šišmiš in Maslinica on the bay of Šešula, where we ate a Dalmation seafood specialty called peka — octopus, pork, lobster, lamb, and monkfish cooked in a giant pot. This meal is no joke: We had to order it two hours ahead of time.

Our captain was a very capable guy called Charlie. I say "guy" but I really mean "kid." He was no more than 20 and still at university in England. He was smart, funny, charming, cool, and told nice stories about his mother. More importantly, he took his job seriously and took excellent care of his five passengers. He knew how to handle the yacht: the sails and the ropes that are a mystery to me, as well as also the extensive port paperwork and documentation that are a bore to others. Best of all, Charlie has spent enough time working with the company to have friends in all the right tiny island ports. Yeah, he knows where to find the peka.

Speaking of tiny, let's talk about my room. I love my husband a great deal, but I don't want to be this close to anyone. Yes, I love the tight efficiency of a beautiful boat, the compactness of it all. But it doesn't leave a lot of room for being alone on vacation, which is a critical part of any vacation. And here's the ultimate condition for taking a trip like this one: You have to want to spend a lot of time in close quarters with the people you're with. Strangers you meet on a boat, good friends, and family usually fall in and out of that category. 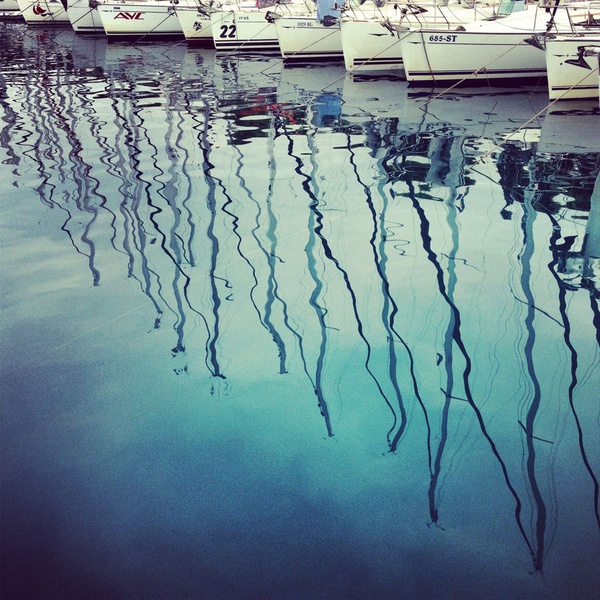 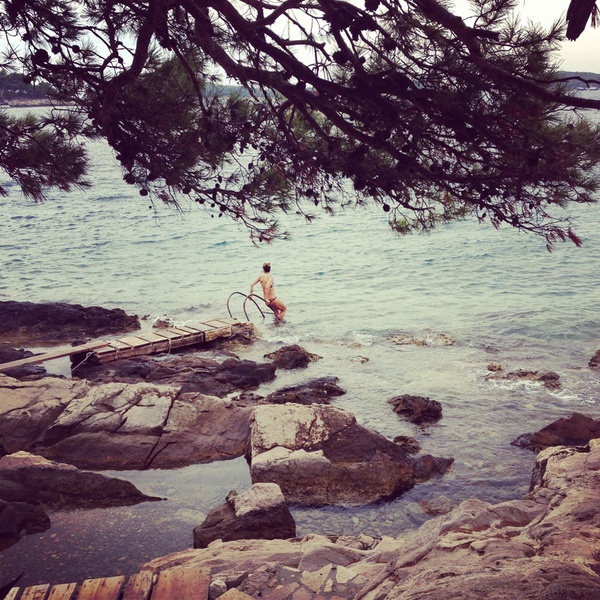 A beach club in Hvar.

The last day, we made our way to Hvar, which I've been promised is a fantastic island, the new St. Tropez. Well, it's cute and there are things to see, like the Venetian Loggia, a mighty fortress on the hill, and lots of beach clubs. But it's also crowded and overrun with daytripping cruisers and drunk partiers who love sing along to a tub-thumping tune. We weren't there in Hvar long enough to go into the island away from the center, and it's not fair to judge a destination on its busy port alone. It's a very walkable city of cobblestone streets, woody paths in the hills, a walk along the coast past many beach clubs. My Croatian friend Anja told me to look out for Falko, a fantastic and mellow beach restaurant and bar. It was a great place to spend the afternoon. For dinner, Charlie took us to Luviji, a highly regarded konoba ("tavern") that served us a terrific seafood dinner on the balcony overlooking St. Stephen's Square.

A yacht is the best way to see this part of Croatia, a land of amazing islands. A yacht with friends will always be better than a yacht with strangers.

Existing sailors will need no convincing that a yacht is the best way to experience a coastline. But Yachts and Friends turned this beach girl into a boat girl — albeit one who dove into the sea whenever the opportunity arose.

Istria, the Better Italy
A Sommelier's Tour of Croatia
Brijuni, The Island Where Dinosaurs and Dictators Party