Growing up with a parent on each coast has it perks, including annual visits to Southern California, a much anticipated and welcomed escape from the freezing cold winter months on the East Coast. Despite the extensive amount of time I've spent exploring the state, I didn't make it to Downtown LA until two months ago. And I was more than impressed. The slightly seedy and somewhat corporate central vein of Los Angeles is rough around the edges but quickly becoming one of coolest and most exciting neighborhoods in the U.S. 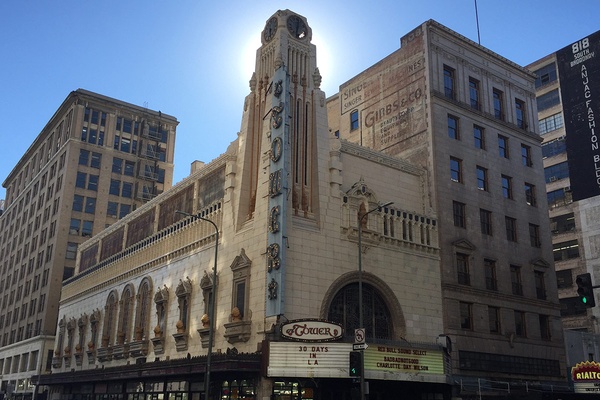 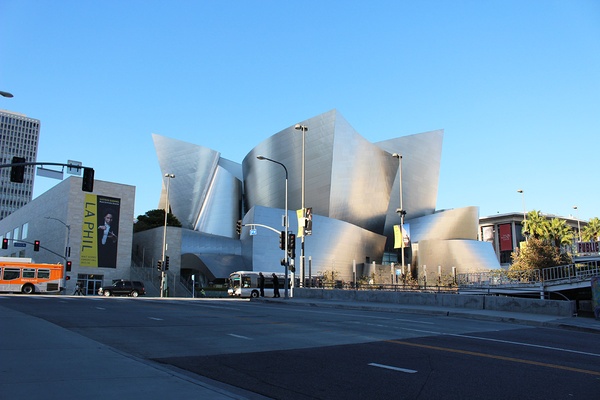 In many ways, DTLA feels like its own city. Located about forty minutes in from the coast, it's populated with the kind of sleek skyscrapers you'd expect to find in New York or Chicago — very different from the beaches and bungalows you typically think of when picturing Los Angeles.

There are several micro-neighborhoods, all walking distance from one another, with their own look and feel. The Financial District and Bunker Hill make up central downtown and house many of the area's big office buildings and hotels, along with major architectural landmarks like The Broad and Walt Disney Concert Hall. The Historic Core gives a glimpse of OG Los Angeles, with its old movie palaces and classic eateries like Grand Central Market. Further afield, you'll find the Arts District, an industrial wonderland made up of warehouses, train tracks, graffiti, indie boutiques, cafes, and yoga studios. 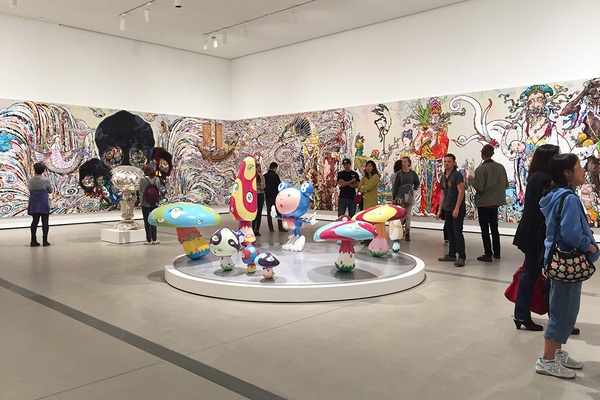 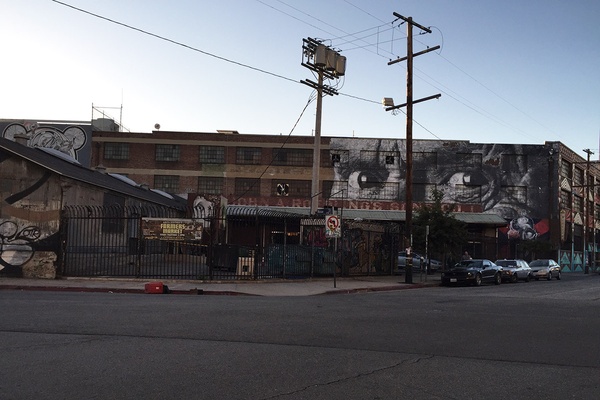 A mural in the Arts District. 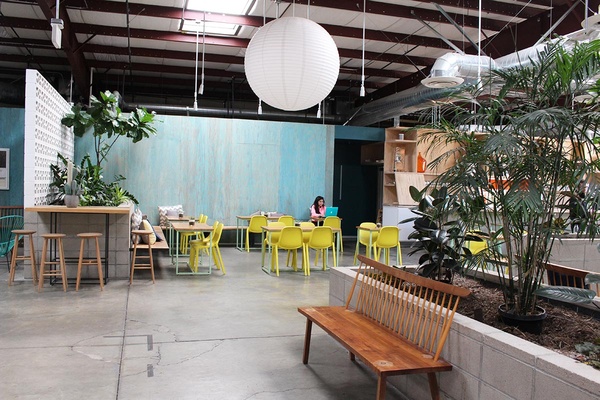 Make reservations for The Broad as soon as you decide to visit, or show up early to wait in line for the limited number of onsite tickets. The city's newest contemporary art museum is free and reservations are in high demand. Eli and Edythe Broad, two of LA's most prolific philanthropists, founded the three-story museum to showcase their vast collection of nearly 2,000 pieces of postwar and contemporary art. The inaugural installation features works from recognizable names like Jasper Johns, Barbara Kruger, and Yayoi Kusama. I was especially enamored with the building's striking interior and exterior design, nicknamed "the veil and the vault" to reflect the idea of having both a gallery and storage space onsite. It's a spectacular museum showcasing a great collection and the small size makes it a manageable addition to any Downtown agenda.

For a different kind of cultural experience, book a guided tour of the Arts District with Cindy Schwarzstein, the founder and director of Cartwheel Art Tours. The once gritty section of DTLA is quickly becoming a dynamic community with a thriving street art scene. Schwarzstein has a wealth of knowledge on the topic and is super passionate about the the ongoing evolution.

The Springs, another Arts District draw, is a health and wellness center housed in a cavernous mixed-use space. The cafe and coffee bar sell vegan food and fresh juices, while the small boutique has a selection of locally made clothing and home goods. The in-house yoga studio offers ashtanga, power flow, and kundalini practices, and offers free meditation sessions on weekdays at 1 p.m.

Nature is not something you'll readily find in DTLA, so if you crave trees and fresh air, schedule a morning excursion with Bikes and Hikes LA. The Hollywood Hills Hike took a little over two hours and was an invigorating way to see the city from a different vantage point while taking in local icons like the Hollywood sign and Griffith Observatory. 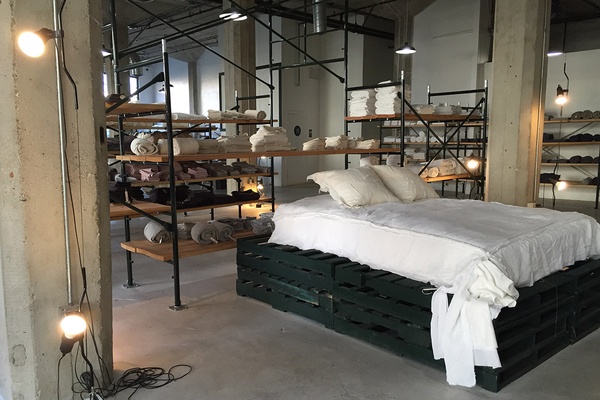 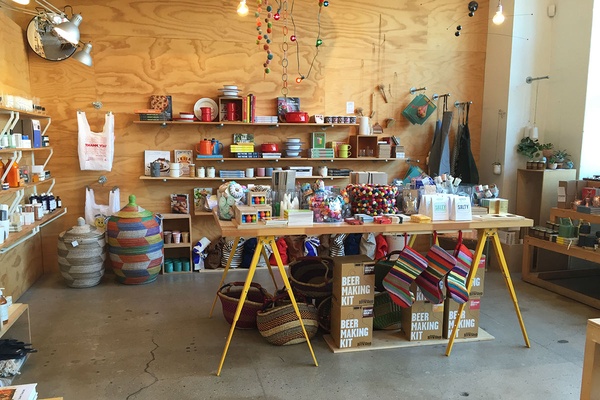 The Arts District has a top-notch indie boutique scene. Poketo, a design-driven shop that I've been following online for a few years (and regularly feature in our weekly Travel Loot column) did not disappoint. Their independent stationery game is strong, as is the collection of jewelry and colorful homewares. Design firm Hammer and Spear set up shop with moody and dark vintage furniture sold alongside lifestyle products from new companies like Milla Chocolates and Appointed paper goods. Matteo sells luxurious linen sheets in earthy colors that make you want to redo your bedroom; socially conscious Apolis has a well-edited selection of men's clothing. 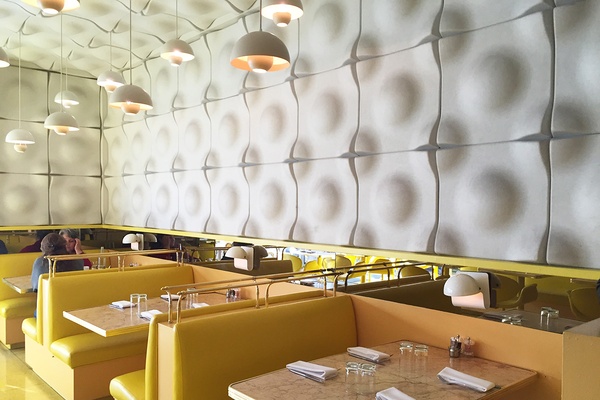 24/7 Restaurant at The Standard Downtown LA.

The hotels skew in two directions: Big chains like Omni Hotels & Resorts, The Ritz-Carlton, and The Westin or boutique brands like Ace Hotel and The Standard. Over the next two years, Freehand Hotel, Soho House, and The Nomad are scheduled to open West Coast outposts. 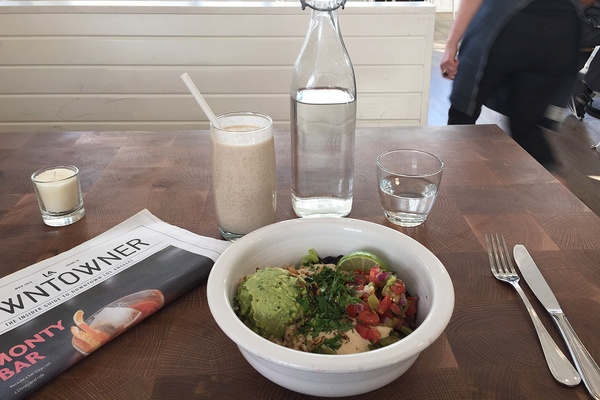 The Mucho Mexican bowl and Grace smoothie at Cafe Gratitude.

Grand Central Market, a downtown landmark that opened in 1917, is one of the area's biggest draws. The space was originally used for green grocers, fishmongers, butchers, and Jewish delis catering to Bunker Hill's stately residences. Today it has a variety of food counters showcasing cuisine from the city's many different ethnicities. A recent influx of new, cool businesses include Egg Slut (try the namesake dish, a coddled egg atop a potato puree served in a glass jar with a side of toasted baguette), Wexler's Deli, a modern Jewish delicatessen, and specialty espresso bar G&B Coffee.

Cafe Gratitude is an organic, plant-based restaurant that is practially a Los Angeles institution. Their new DTLA space is bright and beachy with reclaimed woods and handmade tiles. The menu features healthy riffs on junk food classics like pizza, burrito bowls, and Indian curry.

B.S. Taqueria is a low-key Mexican joint from the chef of Broken Spanish (a more formal Mexican restaurant near the Staples Center) that serves excellent tacos and inventive cocktails. 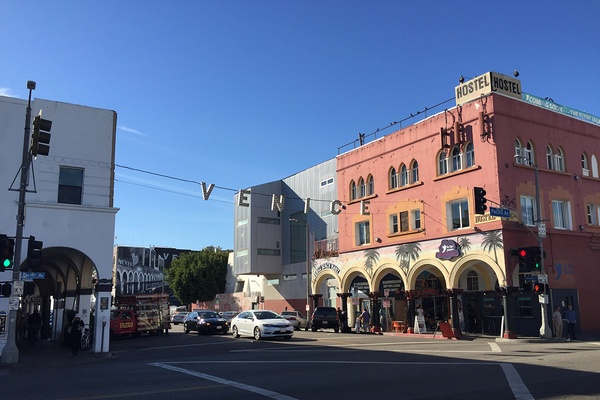 The entrance to Venice Beach. 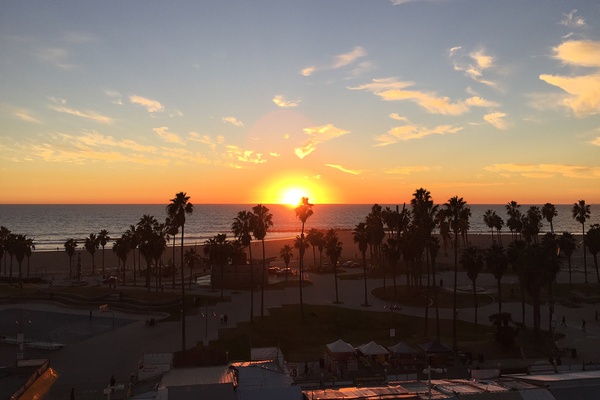 Sunset from the rooftop of Hotel Erwin.

ESCAPE TO THE BEACH

It's hard to imagine a trip to Southern California without a visit to the beach. On my last full day, I took a forty-minute taxi ride out to Venice and checked into Hotel Erwin, an edgy boutique hotel with a rocker vibe that's one block from the boardwalk. The neighborhoods hippie-surfer attitude instantly relaxes you, making it a nice way to cap off a visit to LA. I spent the afternoon strolling the canals and shopping Abbot Kinney — Urbanic Paper Boutique for stationery, Zenbunni for biodynamic chocolate, Moon Juice for fresh nut milk and wellness products, and Tortoise General Store for all things Japanese — before catching the sunset from Hotel Erwin's rooftop bar (call ahead to make reservations) and grabbing dinner at much-loved restaurant Gjelina.

A car is the best way to get around Los Angles, but if you're not planning on leaving DTLA you are better off without one. Parking is difficult and expensive. Much of the area is walkable and car services like Uber and Lyft are readily available for longer distances. If you want to rent a car for a portion of your stay, major brands like Avis and Budget are a good bet.