Team Fathom went to Cuba to have a look around. Here are first impressions from their first trip to the Caribbean island trapped in time.

CUBA – Like many Americans, we have always been curious about the forbidden neighbor to the south. From the glamorous rum runners of Prohibition-era Havana to today's Caribbean island trapped in time, Cuba has always been a fascinating and mysterious place.

The Obama administration has eased a number of limitations in the last few years, but Cuban-American relations can be tricky to navigate, even with the right paperwork.

You might think the right pieces of paper and the necessary permissions would be enough to grant you entry, but that isn't always the case. An easy breezy departure from the United States gave way to a surprisingly arduous customs crossing in Cuba. "Where do you work?" "Do you have friends here?" "What kind of camera do you have?" and several other inquisitions were thrown our way on five separate occasions as we traveled from the plane, through customs, and to baggage claim.

What made the experience unnerving weren't the questions, but the questioners — a duo of customs agents who trailed our every move. As we progressed through the airport, they were always at our heels or just around the corner. Waiting for us. Always watching, always pointing. Once we settled into our taxi, we let out a loud, collective sigh of relief.

Despite the new visas and permits making travel for Americans easier and more accessible, we were later told by our guide that it is still rare to see small groups of American women traveling without chaperones.

Cubans just might be the friendliest people on the planet. They love tourists, and they especially love New Yorkers. The young people we met gave us the impression that they consider the US to be the older sibling they desperately want to relate to. A love of Americana and pop culture seeped into nearly every conversation we had — with an aging college professor talking about our shared legacy of Hemingway, with a young food vendor who was crazy about Glee.

There's no denying it: The relationship between Cuba and the United States has been fraught since Fidel Castro seized power in 1959. While the embargo and the state of the Cuban economy are often discussed in the US, it's a whole other thing to experience it in person.

Many Cubans we met seemed happy; many seemed frustrated. But just about everyone was poor. It's not uncommon to see shops with empty shelves. Many beautiful buildings are decaying.

But it's not all bad, and it's important to be aware of this when engaging with locals. They see the restrictions and poverty in their country, but they're also mindful of what else foreign countries have: the high education costs, low literacy rates, homelessness, and inaccessibly health care. Such basic needs are all met in Cuba. Everyone can go to college, many people have multiple degrees, literacy is high, medical services are available to all, and there is very little crime. 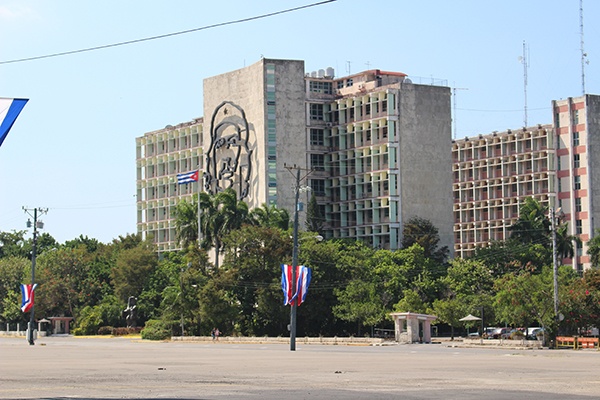 The Cubans we met loved talking about Che Guevara. From bronze busts to billboards, Fidel and Che can literally be seen everywhere. Two other figures you're bound to run into or hear about are expat author and daiquiri devotee Ernest Hemingway and José Martí, a national hero who fought for Cuban independence.

Cuba is located 90 miles south of Florida. The island is about the size of Tennessee. Havana is located in the north. 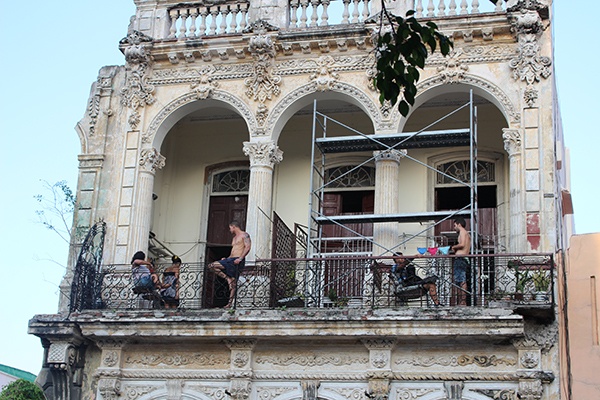 Catching a breeze in Old Havana.

We realize how cliche this sounds, but it's absolutely true: Visiting Havana is like taking a trip in a time machine. We wandered the lobby of a 1950s hotel, with meticulously preserved decor, a menu from the days of Mad Men, and a swimming pool straight out of the Brady Bunch. The collection of vintage American cars cruising the streets never ceased to amaze us. We took an architectural tour with a landmark preservationist who drove from one end of the city to the other, pointing out the chronological change in architecture from the oldest part of the city (dating to the 1600s) to the newest (dating to the 1960s).

For every question, we got a million different vague answers. Whether we asked about the state of Internet access or the difficulty of obtaining approval for international travel, we never heard the same response twice. This was confusing and also fascinating. 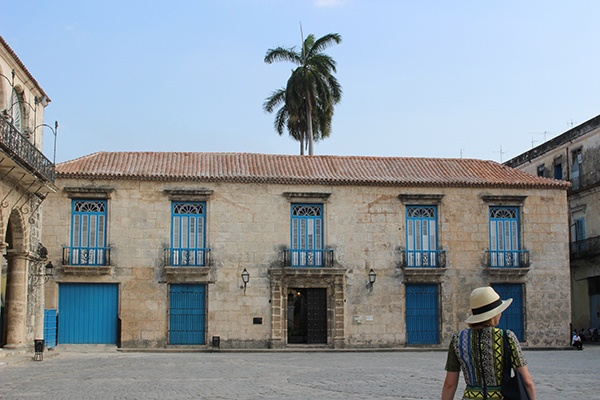 Roaming the streets of Old Havana.

One thing Cuba has going for it is safety. Even when walking down random side streets or jumping in vintage cars hailed on the side of the road, we always felt safe and comfortable.

Cuba has for the lowest Internet density in the Western hemisphere. It's slowly increasing as the government lifts restrictions, but there is still usually limited access for travelers. Although available in some places, finding Internet access is spotty, even at the big hotels. As for phones, if you're an American, be prepared to disconnect: Your cell phone won't work here.

There are two kinds of currency: one for tourists and one for locals. Tourists use the Cuban Convertible Peso (CUC), which is set at a fixed 1:1 rate with the US dollar. The Cuban Peso (CUP) is worth much less and used by locals at places like ration stores and street stalls.

To comply with United States travel permits, you can pre-arrange and pay for everything through agencies and tour guides before your visit. But if you're traveling from anywhere else, you'll need to bring Euros, Canadian Dollars, or Pounds (though not Scottish ones) to exchange into CUC. Don't convert too many CUCs at once — you can't change them back. 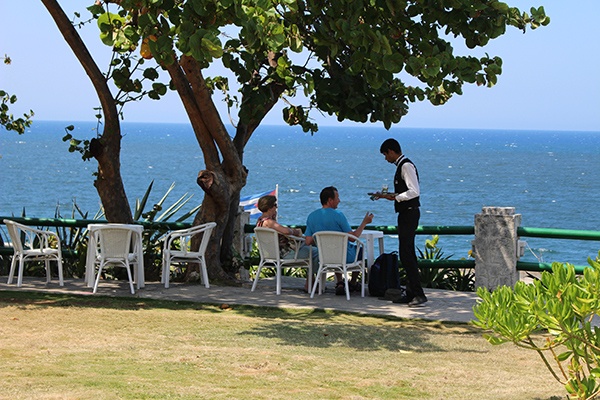 It is hot. We left with a newfound appreciation for air conditioning and natural breezes. Who needs a cute hotel or a fancy restaurant? When you find a spot with cool air wafting through, you'll be more than happy to stay put. The back patio at Hotel Nacional de Cuba has one of the best cross breezes in town. A cold shower also did the trick on more than one occasion.

The food is only so-so and certainly not on par with the Cuban cuisine we love in Miami and New York. The issue is access to quality ingredients. State-regulated butter will never be able to compete with the good stuff.

Restaurants are mostly state-run, but private paladares are popping up as the government allows more economic access to Cuban citizens. These little restaurants and eateries are tucked away into all sorts of strange locations (abandoned buildings, rooftops, alleyways). Local specialties include fresh seafood, moros y cristianos (rice and beans), and ropa vieja (shredded beef in a tomato sauce).

Locals are a friendly bunch — especially the guys. When it comes to cat calls, Cuba can rival Italy. Yet it never felt aggressive and was never offensive. Hisses and whistles are a way to attract attention, to start a conversation on the street. Abuelitas selling handmade dolls and panama hats, musicians playing Guantanamera on repeat — there are a million opportunities to engage. You'll get to practice your Spanish.

The Other Side of Paradise: Life in the New Cuba, Julia Cooke
Havana Real: One Woman Fights to Tell the Truth About Cuba Today, Yoani Sanchez
Waiting for Snow in Havana: Confessions of a Cuban Boy, Carlos Eire
The Sugar King of Havana: The Rise and Fall of Julio Lobo, Cuba's Last Tycoon, John Paul Rathbone