On an island where hotels attract repeat visitors for generations, how can a newcomer stand out? Easily, if the hotel in question is Rosewood Tucker's Point. Fathom's Berit Baugher checks in.

BERMUDA – On an island where visitors are fiercely loyal, staying at the same hotel for generations, openings are rare. Rosewood Tucker's Point opened in 2009 and easily joined the ranks of high-end standouts on the island. The hotel invited me for a visit, and I was all too happy to swap the harsh New York winter for a sunny Bermuda weekend.

The British colonial-style manor house has become a go-to for those looking to relax in luxurious accommodations. Rosewood Tucker's Point combines the amenities and perks of a big resort with the charms and intimacy of a boutique hotel.

Hidden away from the island's main port and other hotels, Rosewood Tucker's Point overlooks Castle Harbour on one side and Harrington Sound on the other. Guests are greeted by a cheerful duo wearing a get-up best described as preppy-meets-safari-meets-tropics: traditional Bermuda shorts, knee-high socks, and salmon pink pith helmet. It's a lovely first impression. 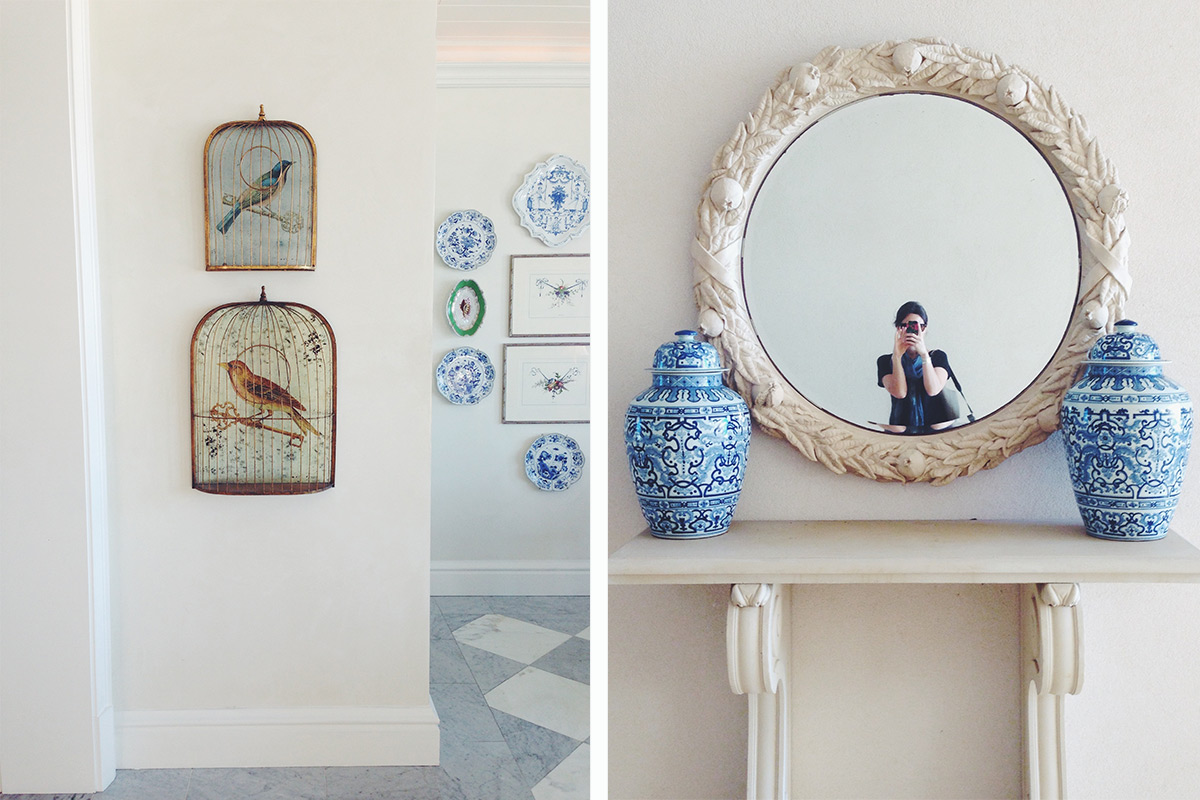 The center of the hotel is the manor house, which feels more like a beautifully decorated home than a hotel. A grand staircase and elegant library round out the classic but preppy vibe that reminds me of my childhood in suburban Connecticut: blue and white ginger jars, porcelain foo dogs, and antique horse lithographs. I was especially taken with the lobby's grey and white tiles and the interesting art, including a large-scale model ship and three-dimensional birdcages with mercury glass and painted birds.

The hotel's fine dining restaurant, The Point, houses a museum-worthy travel artifact: an 80-foot-long mural from the exclusive Sky Club of New York's Pan Am Building (now the MetLife Building). In 1966, artist Gerard D'Alton Henderson was commissioned by Pan Am founder Juan Trippe to paint the world's major ports of the 1880s. After the Sky Club closed in 2005, the mural was relocated to the hotel, and Bermuda's Hamilton Harbour was added — presumably out of respect for its new home. 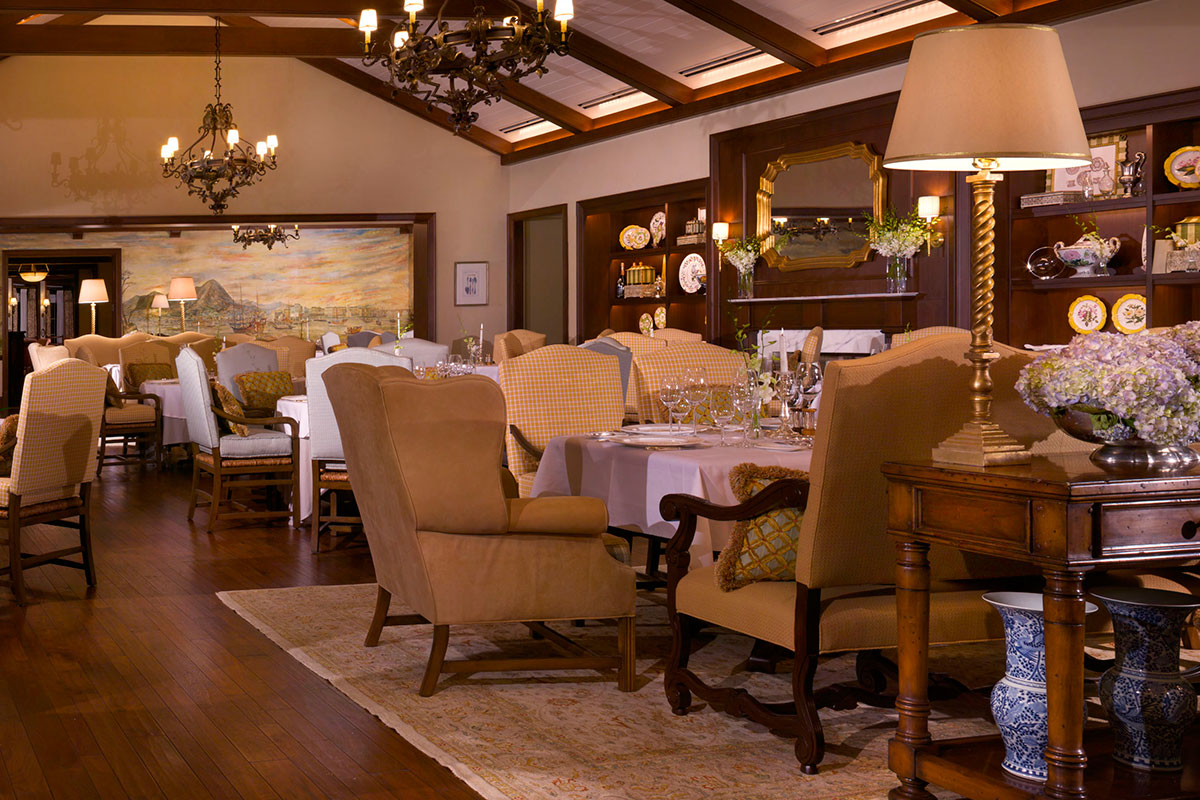 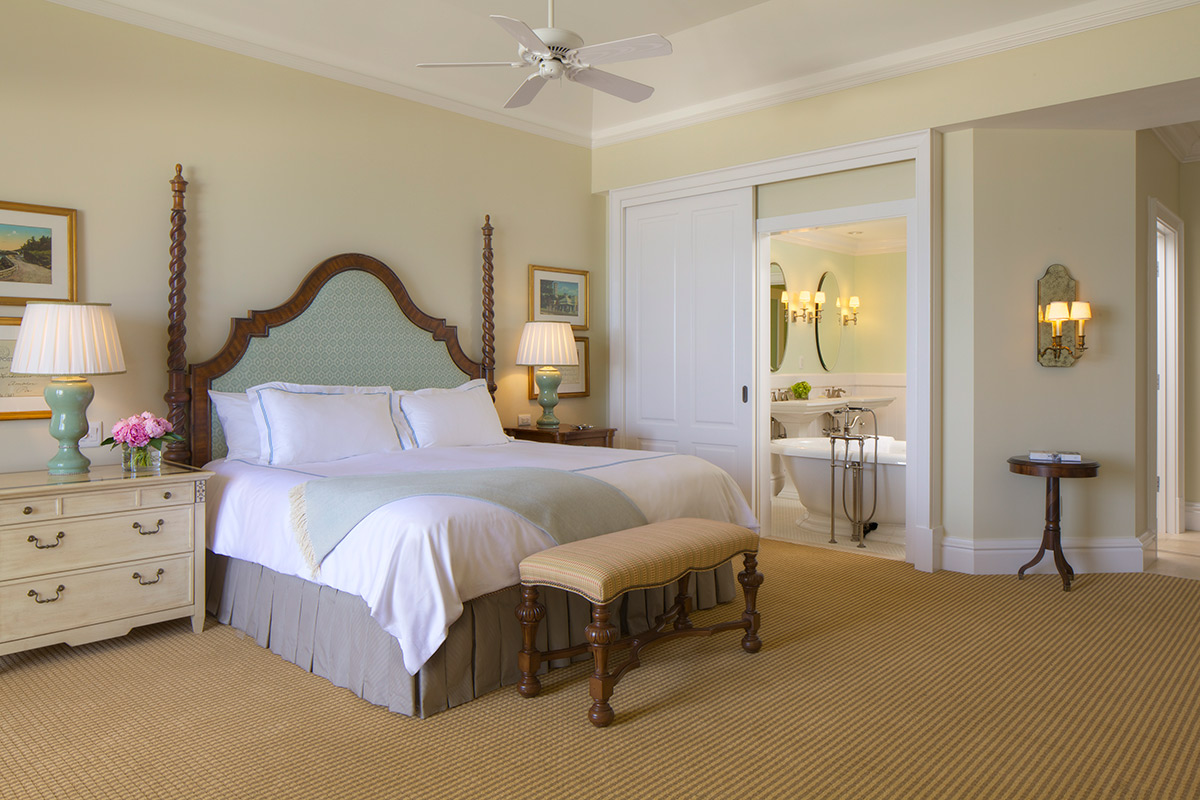 The Point, above, and a deluxe room, below. Photos courtesy of Rosewood Tucker's Point.

I stayed in a second story Villa Suite overlooking Castle Harbour. It's crisp, pristine, and way too big for a person who still checks her closets when she gets home at night. But that couldn't detract from the fact that I loved it. It was the kind of room you could easily disappear into for a few days. The bed was incredibly soft and ideal for sinking into after a long day out. The closets were ginormous, and the bathroom had one of the best soaking tubs I've ever nearly drowned in. Ingredients for a Dark 'N Stormy were a nice welcome-to-your-room. 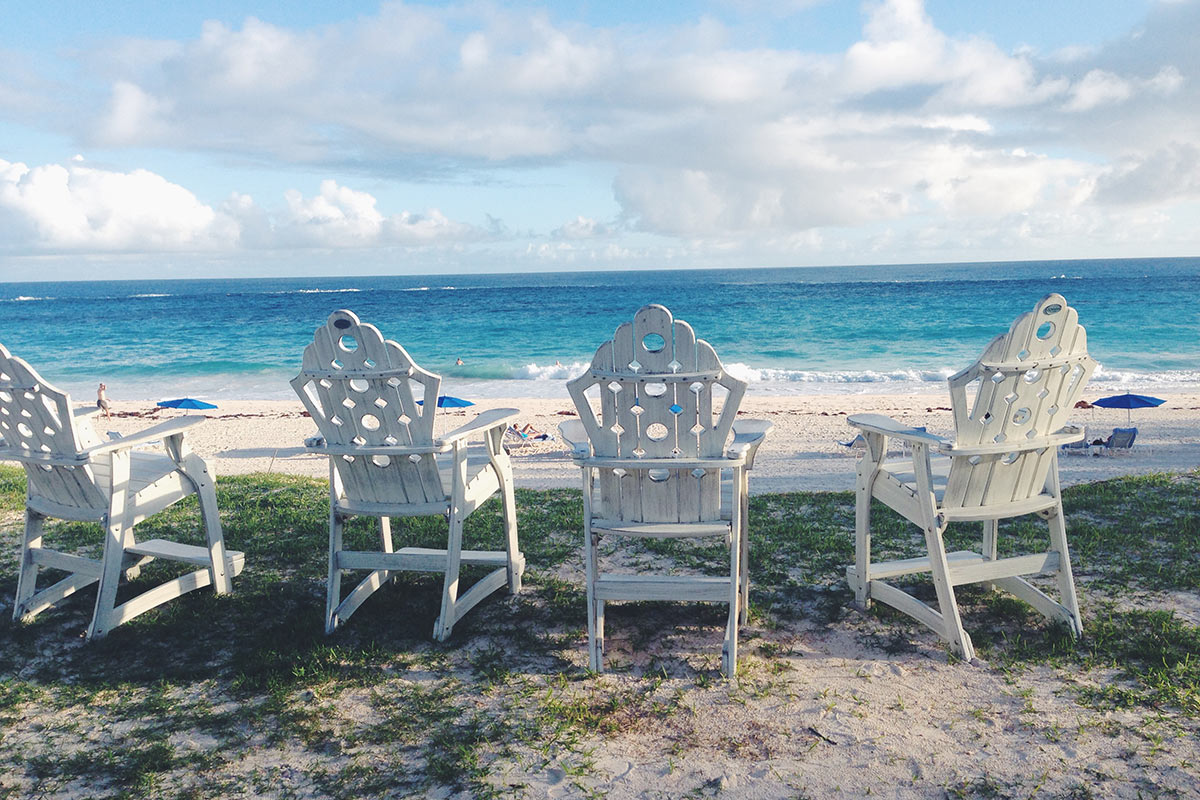 Everything you'd expect for a resort vacation: great restaurants, spa, world-class golf course and club, tennis courts, four swimming pools, a private beach, and WiFi strong enough to FaceTime and download a movie. I should note that though the hotel feels beachy, it is not actually on the beach but rather on a hillside overlooking the ocean. The private beach is a ten-minute ride away via shuttle or golf cart.

Considering the hotel's small size, the dining options are extensive. If you're staying in a room with a view, breakfast on your patio is a must. For other meals, head to The Point for a mix of international cuines and local seafood. Sur Mer, the restaurant at the beach club, serves French-inspired seafood, much of it from the ocean you're looking onto. Sul Verde serves Italian overlooking the golf course and hosts a weekly hands-on mozzarella-making class. More casual options are avilalbe for poolside dining.

Anyone looking for a quick trip from the East Coast. My flight from New York City was only two hours, but I felt like I had crossed many time zones.

Those wanting to be directly on the beach or in the thick of the island. Tucker's Point is slightly out of the way and isolated. The property is small, but feels spread out. Golf carts are available to borrow, a shuttle takes people down to the private beach, and taxis readily available. It's also not for people unwilling to spend money. But neither is Bermuda. 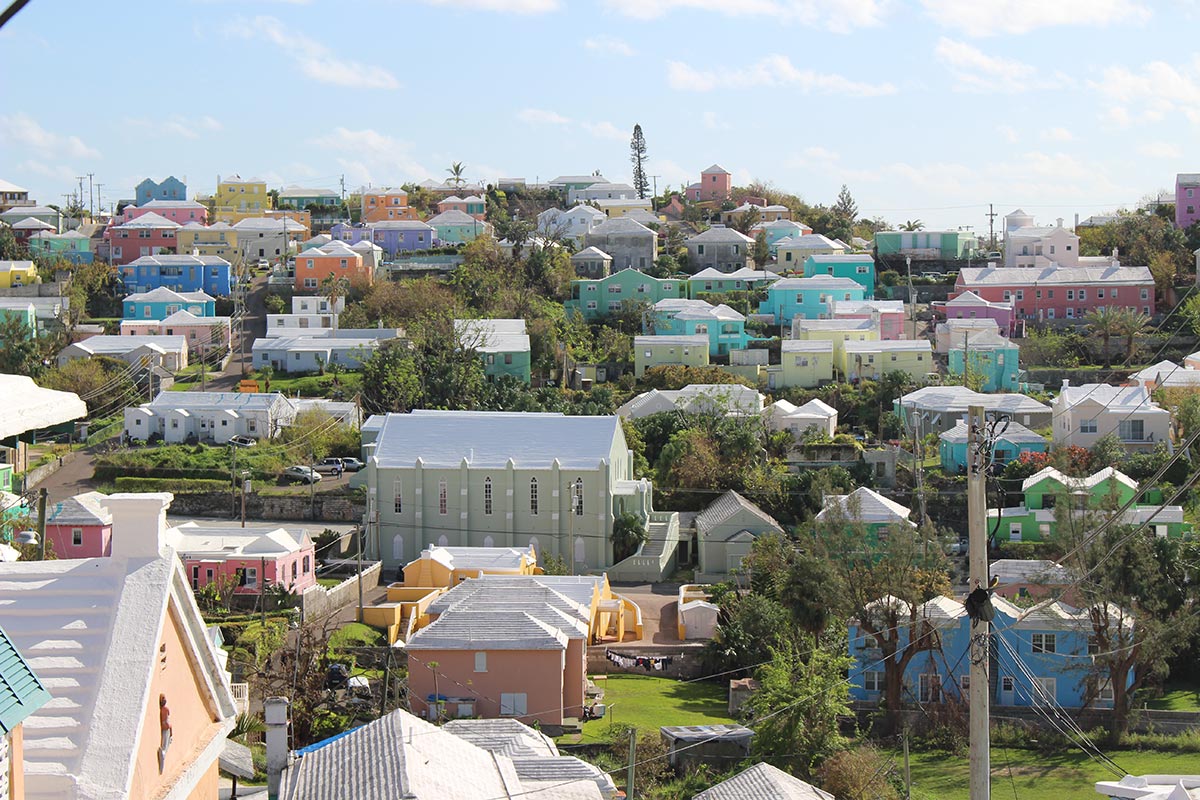 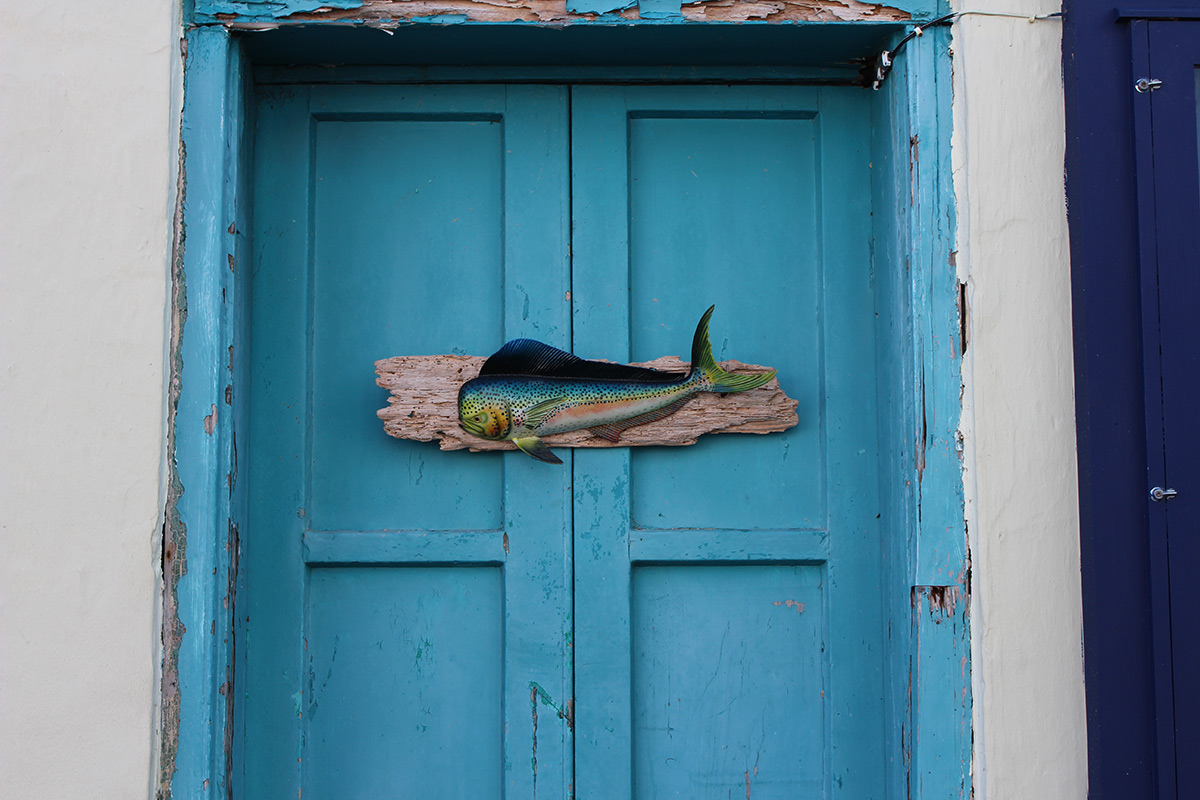 The colorful houses of Bermuda, above, and a front door in St. George's. Photos by Berit Baugher.

Bermuda is a relatively small island in the Atlantic Ocean due east of South Carolina, 22 miles from top to bottom. Because the hotel is located in a residential neighborhood within Hamilton Parish, you'll need to take a taxi or hop on the local bus to get around. Mopeds are another option, but the roads are windy and notably dangerous to navigate for new riders.

First things first: If you plan on leaving the hotel, you'll need a ride. Larry Rogers (+1-441-734-8024) is the guy to call. Not only can he get you from one place to the next, but he also knows everything there is to know about Bermuda. He's available for rides as well as custom island tours. He was our guide for the whole trip. I met his family and his dog and saw his childhood neighborhood. He's terrific. 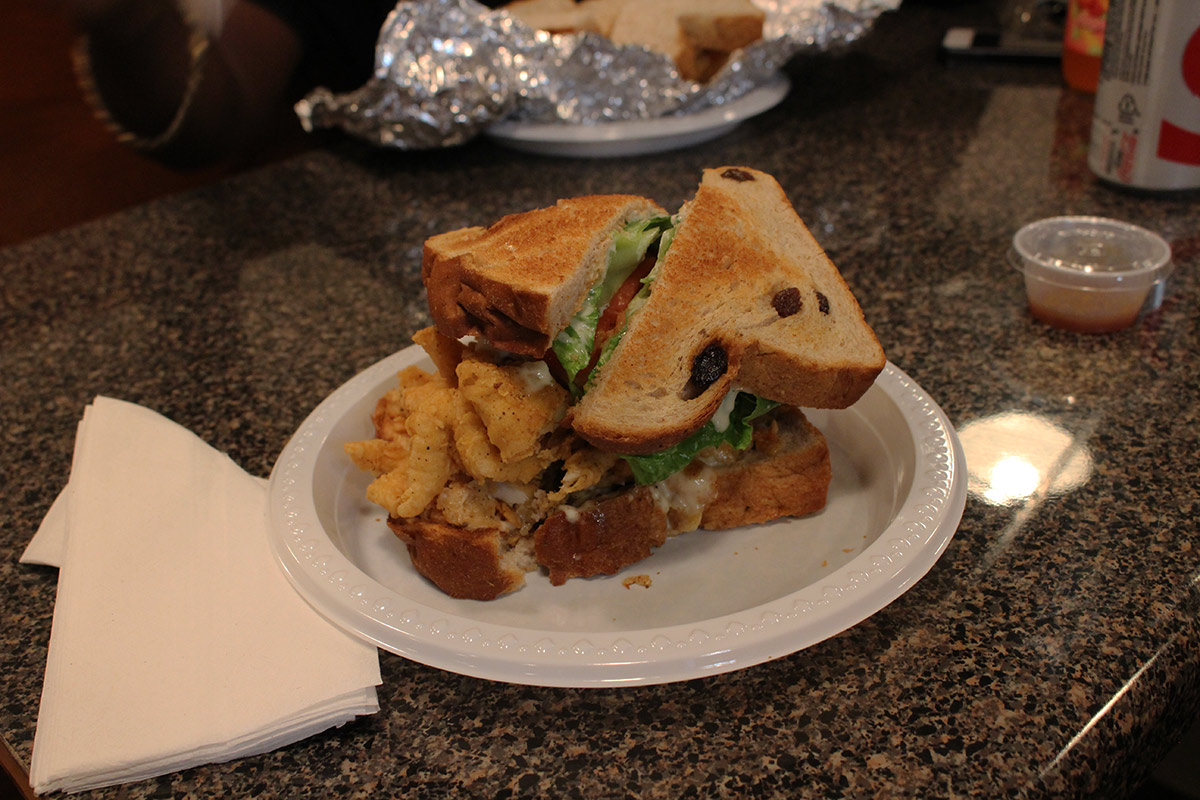 Once you're out, head to St. George's, a wonderfully colorful colonial town that is surprisingly deserted. Stroll the streets and stop at the original Art Mels Spicy Dicy (Water St.; +1-441-297-3965) for a delightfully light, but gigantically sized, fresh fried fish sandwich served on two thick slices of raisin bread with lettuce and tomato. Ask for a side of homemade hot sauce and wash it all down with Barritt's Ginger Beer. The chicken sandwich is also delicious.

For local culture, stop at Masterworks Museum of Bermuda Art. Creative director and founder Tom Butterfield gives a captivating and animated vault tour that will make your trip. For an outdoor adventure away from the water, head to the island's very own High Line, the Bermuda Railway. Home to the first and last railway from 1931-1948, it's now a great place to walk, run, horseback ride, and bike. Book a bike tour with Staphen at Fantasea. He'll show you the trail's highlights, including the best spots for swimming.