In its heart of hearts, St. Andrews is a quaint seaside village that happens to be the birthplace of golf, the home of Scotland's oldest university, and the meeting place of Prince William and Catherine Middleton. These attractions could easily transform the tiny town into a giant commercialized circus, but luckily that isn't the case. The small town vibe combined with cobblestone streets, gothic architecture, and Barbour-clad students is irresistibly charming.

Tucked away on the rocky coastline of Scotland's eastern edge, St. Andrews overlooks the North Sea and is part of the Kingdome of Fife. In Scotland, regions are referred to as kingdoms, which feels incredibly appropriate given the majestic landscape. A part of the country's stunning lowlands, the medieval town's natural surroundings are magical — in a fairytale-esque, slightly sinister Game of Thrones kind of way. The rolling countryside is vast, verdant, and dotted with livestock, but can just as easily be dark, brooding, and draped in a layer of fog.

THE HOME OF GOLF

I didn't get far without seeing evidence of the town's official pastime — Golf with a capital G. The sport has been played in the area since the early 15th-century and currently there are ten courses, including Old Course, the original and most well-known. It frequently hosts events like the British Open Championships (the oldest of the four major championships in the professional sport). The season is year round but peaks between May and September. A slot on the public course is highly coveted but not out of the question for visitors, assuming you have a suitable handicap (24 for men and 36 for women). Reservations can be made about a year in advance — or local hotel guests can enter the town ballet for a chance to play with 48-hours' notice. Guests at the Fairmont St. Andrews can take advantage of the hotel's ballot back-up service. This ensures a tee-off time at one of their Kittocks or Torrance courses if a bid for the Old Course isn't a success.

Other notable courses include Castle Course, The Duke's Course, and Kingsbarns Golf Links.

Fans of the sport will appreciate golf-minded points of interest, like The Royal and Ancient Golf Club of St. Andrews, one of the oldest, and most prestigious golf clubs in the world; the British Museum of Golf, which tells the sport's story starting from the Middle Ages; and Rocca, an elegant restaurant serving locally-sourced Scottish and Italian food overlooking the 18th hole on Old Course. 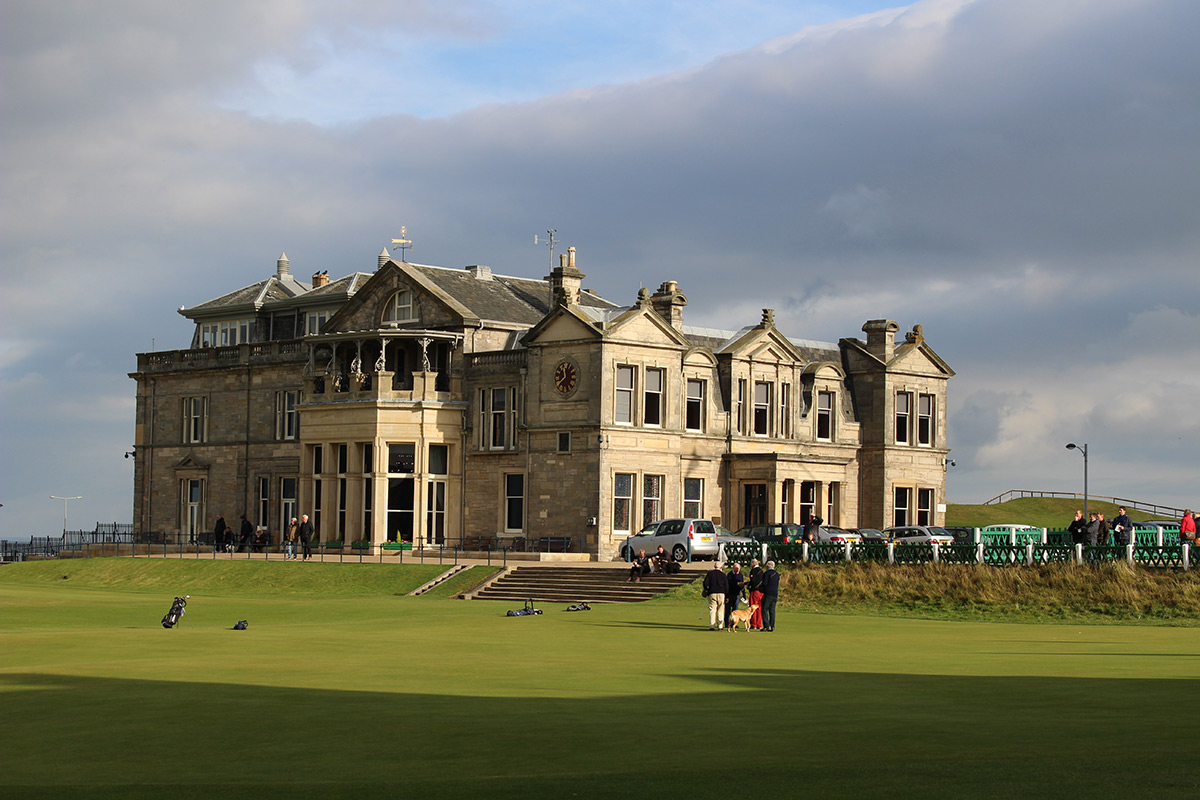 The Royal and Ancient Golf Club of St. Andrews. 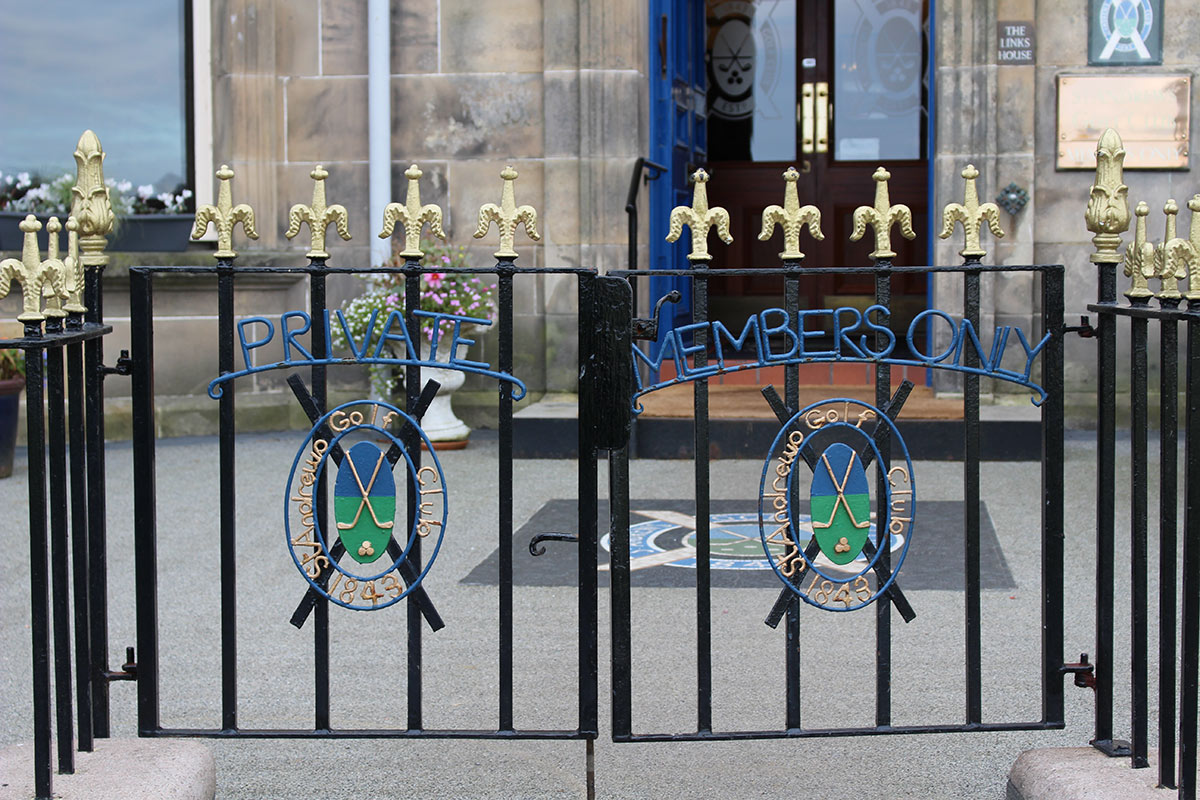 With a reputation as the top matchmaking university in Great Britain, I'm not surprised Prince William met his future bride, Catherine, Duchess of Cambridge, while attending picturesque University of St. Andrews. The school's ivy-laden buildings are spread throughout the small town, which is reminiscent of something you'd find in New England — with more patina. The duo graduated in 2005, but kitschy mugs with their faces and signs marking their favorite spots remain. For those who are curious (or obsessed), St. Salvator's Hall (their freshman dorm) and Northpoint Cafe (their favorite coffee spot) are easy spots to access from town. 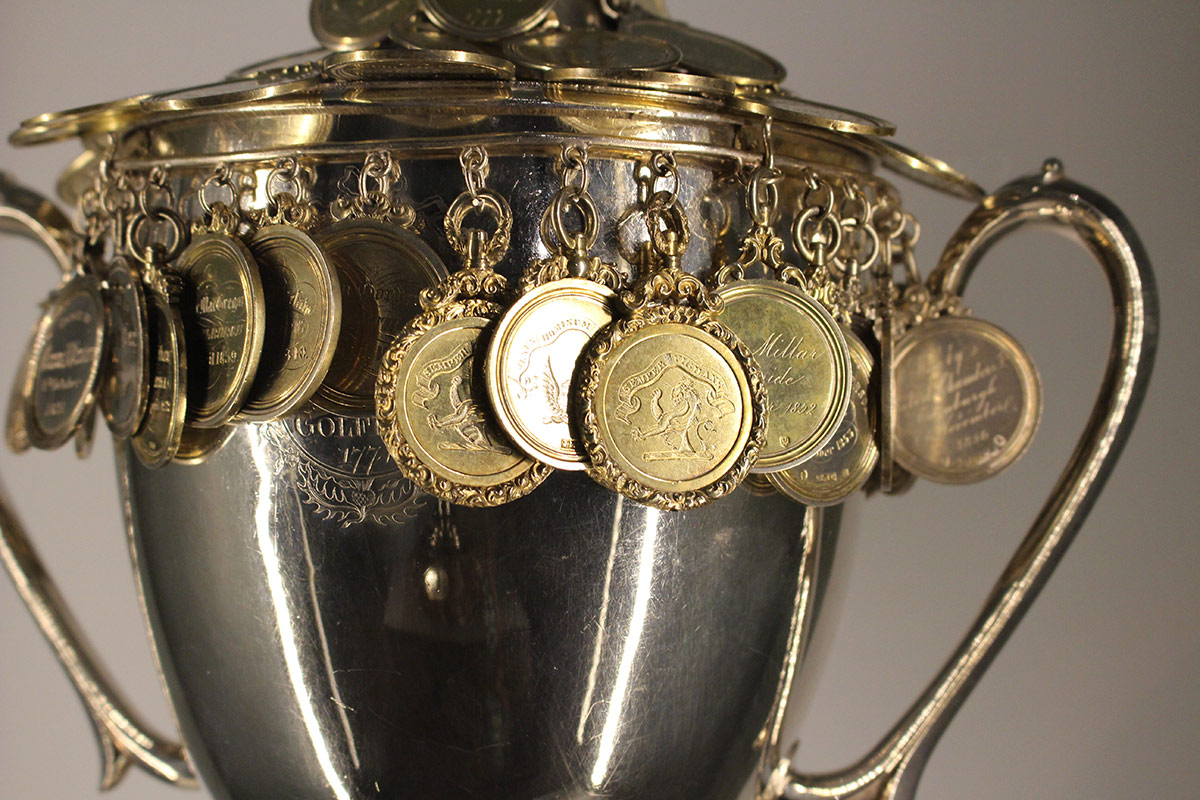 The oldest charm on this trophy dates back to the 1700s. 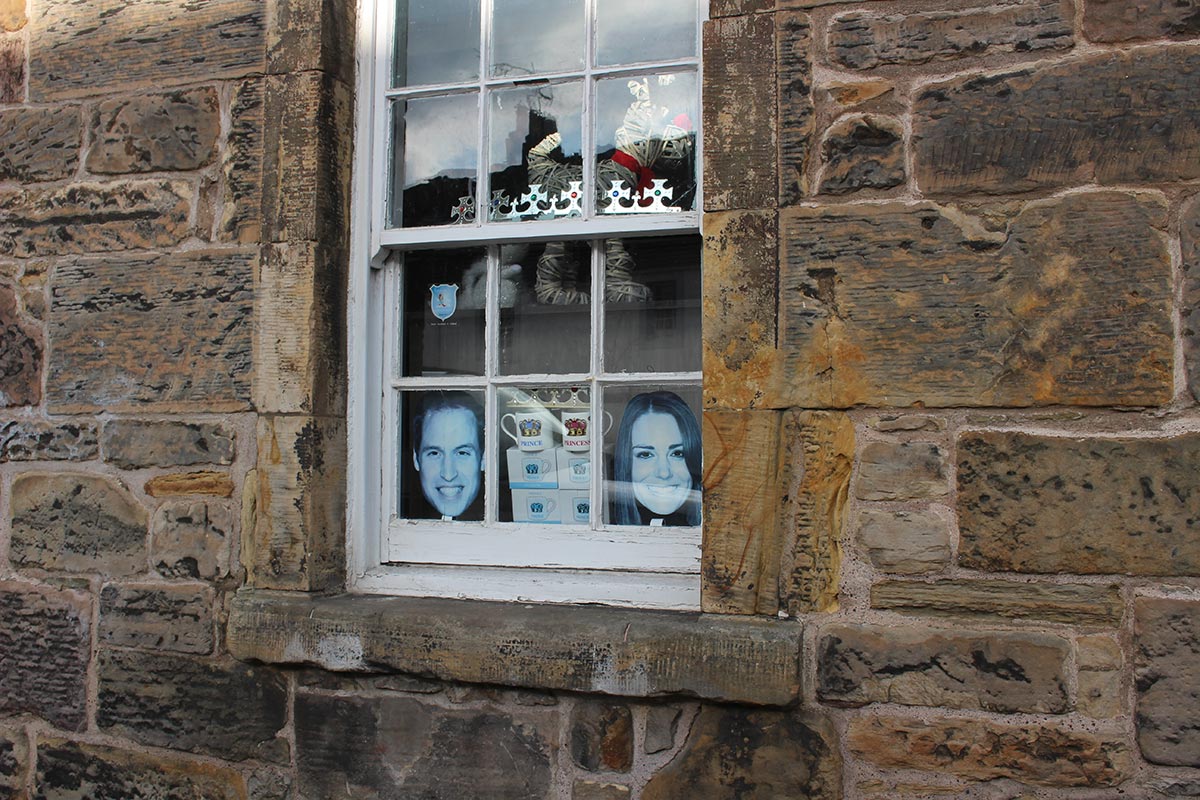 Will and Kate making an appearance. 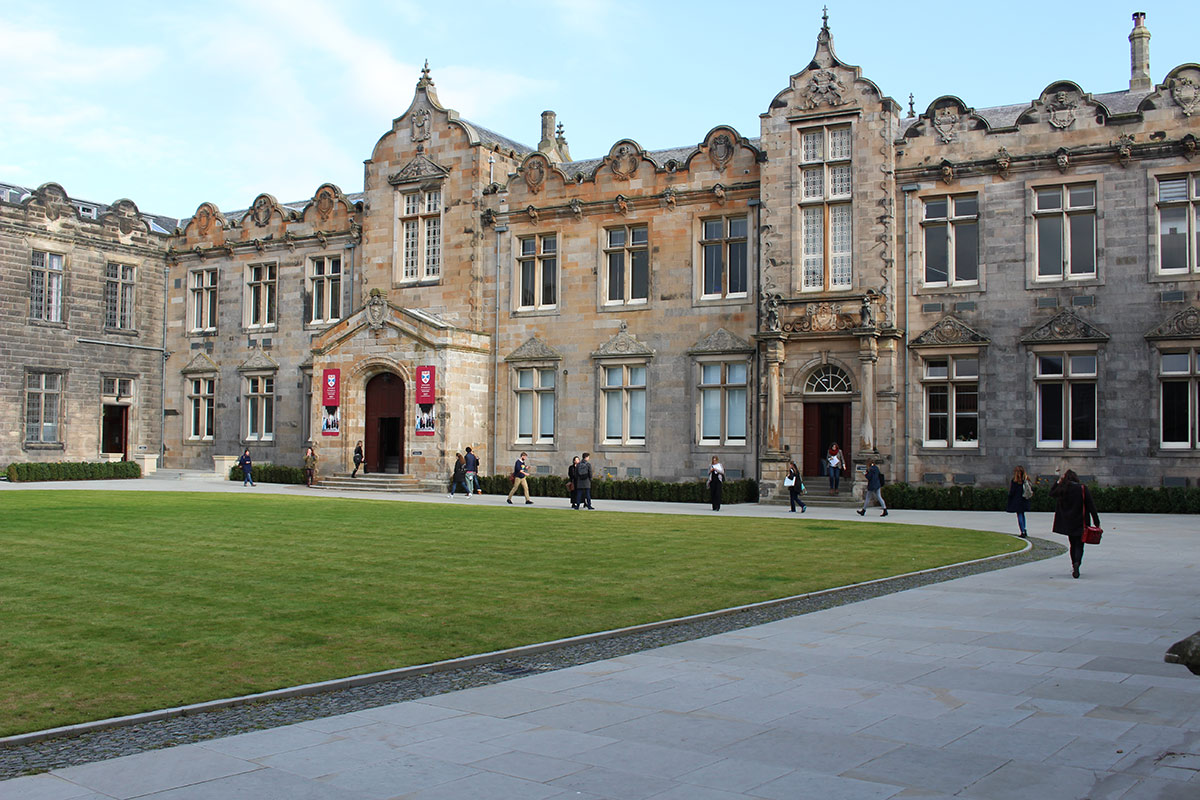 A quad at University of St. Andrews.

One of the area's biggest draws (and regrettably something I missed because of rain) is the Fife Coastal Path. The long distance footpath stretches 117 miles along the water from Culross through St. Andrews and on to the Tay Bridge. Entry points are scattered about, making it easy to design your own route.

Downtown St. Andrews is worth a few hours of your time. I spent a morning exploring the ruins of St. Andrews Castle and St. Andrews Cathedral with Mike Taylor of Calluna Tours, before heading off on my own to see the shops. Johnstons of Elgin has been the country's premier cashmere maker since 1797, so I made a point to stop by and pick up a pair of their classic knit socks. Iain Burnett sells beautiful boxed chocolates and is known for his delicious velvet truffles.

One-year-old Kingsbarns Distillery is a more recent addition and a twenty-minute drive from town. The historic and once derelict farm has been transformed into a modern whiskey distillery that sources water from a spring on the property and uses Kentucky casks made of white oak. Book a tour and then stay for a warm lunch of soup and herbal tea.

The farm-to-table trend has been making its rounds in the US for a few years now, but I got the impression that its practices are the norm in St. Andrews. The countryside setting makes fresh produce and quality meats easy to source and there's a real earnestness from locals who prioritize purchasing from smaller neighborhood businesses.

I fell madly in love with Balgove Larder, a modern farm shop with two restaurants. Cafe/shop combinations that specialize in artisan products make my heart swell with happiness and, more often than not, tend to leave my pocketbook empty. The cafe serves farm fresh eggs, locally grown bacon, and other simply prepared homemade foods, while the market sells a wonderful selection of UK-made provisions and home goods. I picked up a few tins of shortbread biscuits from Shortbread House of Edinburgh for my friends and a box of Clipper Tea in lemon and ginger for myself. A former onsite sawmill has been turned into a rustic weekend-only steak restaurant and, in warmer months, holds night markets with live music, fresh food, local beer, and work from neighborhood craftspeople. The farm is a five-minute drive or a ten-minute bus ride from town.

Forgan's is a similarly minded restaurant that focuses on sustainable agriculture from local sources. Housed in a former factory on Market Street, the restaurant's style is a mix of modern and earthy. Book ahead and secure one of their "bothy's" for larger groups. The small rooms are adjacent to the main dining room and are each warmed by their own fireplace. Next door is sister restaurant Mitchell's Deli, which has a similar ethos (but on a more casual scale) with a delicatessen counter and takeaway meals.

For an unparalleled view, head ten minutes out of town to St. Andrews Bar & Grill, a Scottish steak and seafood restaurant with floor-to-ceiling windows overlooking the rocky coastline. They too focus their menu on local, seasonal ingredients.

And for those looking to dig into a plate of battered fish and chips, Cromars, was recently named the best in Scotland. 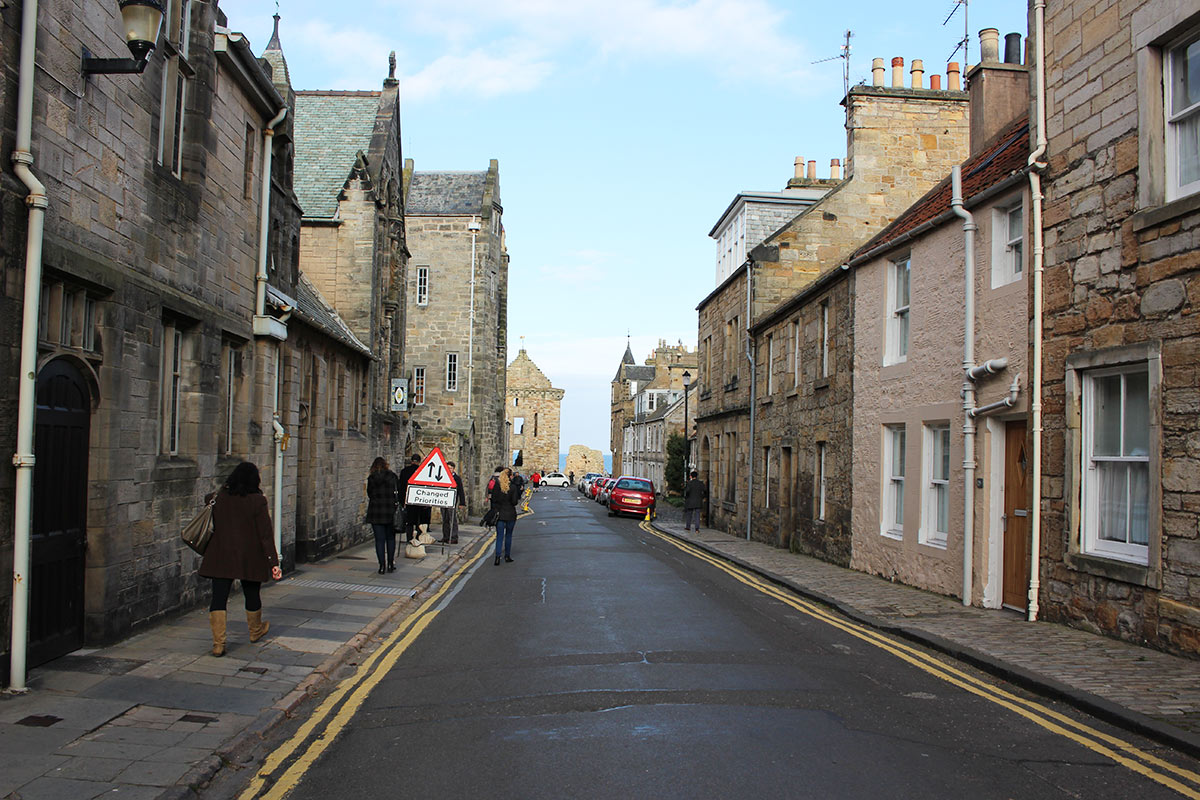 A street with a view. 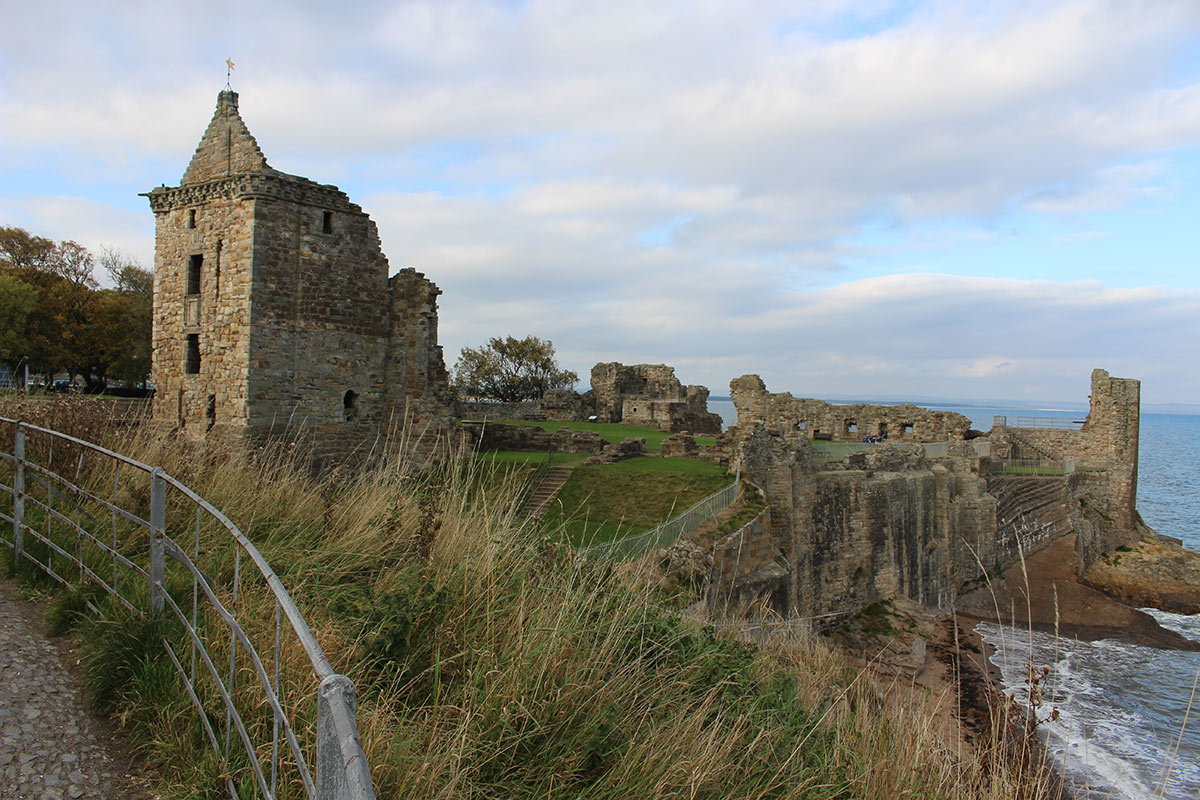 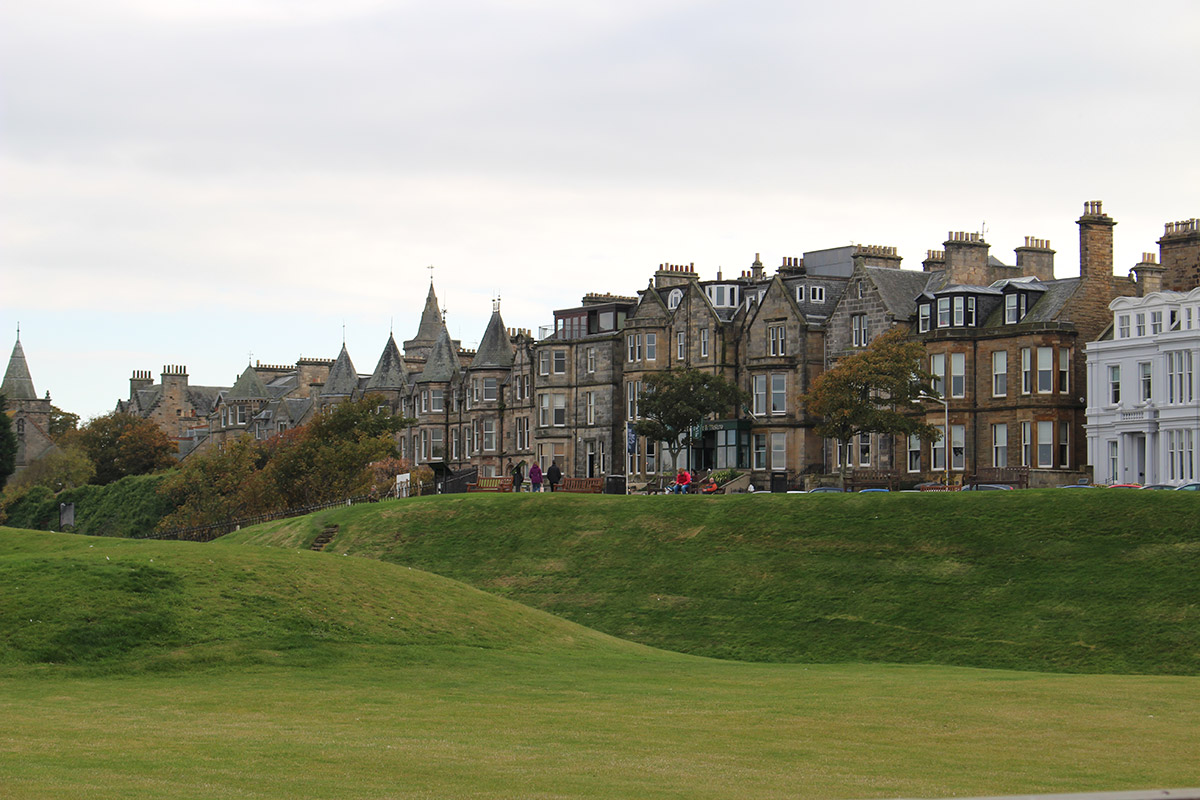 I stayed at the Fairmont St. Andrews, an expansive country-chic resort set along the breathtaking coastline and just a ten-minute drive from downtown. It's the kind of place you could settle into for a few days, with most everything you need for an enjoyable vacation — cozy rooms in earthy colors and charming plaids, Le Labo bath products, championship golf courses, a gigantic indoor pool, and an excellent range of restaurants — but if you're interested, they make it easy to explore the greater surroundings. A hotel bus regularly shuttles guest into town and the concierge can help set up an array of nearby activities, including fishing, sailing, riding, white water rafting, falconry, and clay pigeon shooting. They happily accommodate all types of groups, from families with dogs to politicians attending the G20 summit. The hotel's interiors are being refreshed this spring and will include a new tech-friendly coffee bar and modernized marble bathrooms.

St. Andrews is a 65 – 70 minute drive from Edinburgh, which also has the closest major airport. Direct flights go to cities like London, Dublin, Paris, Amsterdam, and New York (Newark). It's a 90 – 100 minute drive from Glasgow. London is a six-hour train ride with a particularly scenic route.

The town of St. Andrews is small and walkable. For outings outside the city center a car is nice, but not necessary (especially if you aren't comfortable driving on the left side of the road). There's a reliable and easy-to-use local bus service that I had no problem navigating, as well as several taxis companies. I used Golf City Taxis (+44-1-334-477788).

A little known fact is that St. Andrews is one of the sunniest and driest parts of the United Kingdom — seeing less rain than Paris and more sun than London. That being said, it is also important to note how much the weather can vary. Springtime tends to bring regular intervals of sunshine and showers, while summer days can last up to nineteen hours. I was lucky enough to go during the fall, a favorite time for many to visit because the weather is reliable and there are longer stretches of sun. Winter can be bitterly cold, but rarely does it snow.