When traveling, it's always a good idea to brush up on the local customs, protocol, and codes of behavior — lest you look like a sloppy fool. One of our classiest contributors, Marguerite Richards of Atout France (French Government Tourist Office), tells us how to keep one's dignity when visiting Morocco.

A Moroccan friend recently accompanied me on a holiday in Marrakech. As a woman going to a Muslim country, I was wary about packing. I would be going in the dead summer of August, but I knew that walking around as I might on the beach in Miami, Rio, or the South of France wasn't going to fly.

The myth: A woman should wear a headscarf to be respectful of local traditions.

My reality: Because the hijab (headscarf) is a religious tradition, a non-Muslim woman wearing a headscarf looks inappropriate in Morocco. Whereas some Muslim countries would demand that all women cover their heads, the Marrakechi are used to Western dress. That said, showing your shoulders, arms, and legs will draw attention from men and women alike. Admit the parallel: When you see a woman in a full hijab walking down the street in the United States, you want to stare so badly that your eyes itch. Since rule number one for the savvy traveler is to blend in, make it easy on yourself and cover up a little.

My story: For a week in August, I got away with two pairs of light, loose-fitting linen pants and two long-sleeve cotton blouses that I wore over clean tanks. I wasn't entirely spared from catcalls and stares, but overall the attention was bearable. A friend of mine wore short shorts one day and got pinched in the derriere. Enough said. 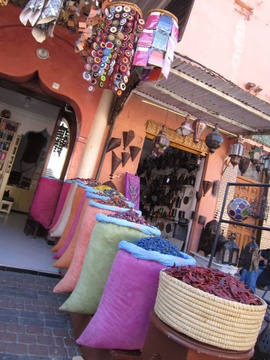 Marrakech is known for its souks, where beautiful leather, silver, pottery, and textiles abound. Even if you're not a shopper, you can't pass up the colorful vision of overflowing stalls and animated vendors.

The myth: It's rude to barter in a country with an economy that isn't as strong as mine. You should pay the asking price.

My reality: Although the moral dilemma is not invalid, and it's certainly generous to pay what vendors ask, Moroccans expect their clients to barter. For many, it is even one of the more enjoyable aspects of their work! Marrakechi shop owners are especially savvy business people. They know the value of their goods in the United States and Europe, and they will ask you for it. They may initially scoff at the idea that you try to barter because they know it's not a western practice, but if you find a friendly vendor, you'll be sure to partake in a truly local experience.

My story: Learning the art of the barter starts with having a sense of humor. You need to go in with a smile and speak of outrageous prices — even try to sell your (girl)friends in exchange for a negotiated number of handwoven rugs. If you are too serious, it may come off as unfriendly and the deal might go awry. A rule of thumb is to allow the vendor to propose the starting price, and you follow by dividing it by three (or the price you really want to get away with). If the vendor doesn't lower his price, simply walk out of the store thanking him, all the while being very friendly. Never show contempt — and certainly never look back. The moment you give any sign of truly wanting the item, you lose your power in the barter. To keep the upper hand as the client, feel confident that you'll find the same treasure elsewhere for a lower price. The vendor may very well may call you back in to renegotiate. 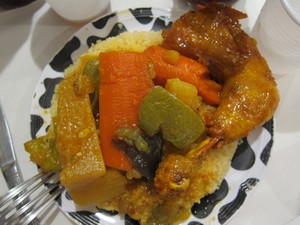 There is an incredible array of food, from fine-dining establishments to casual eateries and market carts. And it all looks very tempting.

The myth: You can eat anything, as long as it's cooked.

My reality: Many restaurants are Westernized and of no concern, but it's best to get recommendations for places to eat from friends, a concierge, or a guide who won't want to steer you wrong. It is a reality that many Moroccans, especially in smaller towns, still use the traditional right hand for eating, left hand for the WC hygiene — a method they've been using for centuries. And while the food could be extremely fresh, Westerners might be exposed to unfriendly bacteria during the preperation process.

My story: I ate a lot of absolutely delicious and varied chicken, beef, and vegetable tagines; a traditional Berber dish named after the iconic clay pot in which it's cooked. (Its cone-shaped lid allows for steam to circulate.) A one-pot dish means that fewer hands are involved in prep, limiting the number of foreign bugs that might otherwise send you to the latrine for your evening. 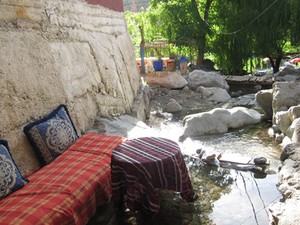 Morocco has Atlantic and Mediterranean coastlines and a rugged mountain interior.

The myth: It's all desert, with dunes for miles. And a camel ride is the only way in or out.

My reality: Getting out of the city is easier than you'd think. A mere 30 kilometers outside of Marrakech (and easily accessible by auto route) are the base of the Atlas Mountains (great for exploring) and La Vallée de l'Ourika (great for hiking). The River Ourika flows down from the High Atlas Mountains, and a dozen restaurants serve tagine at tables right in the water. Imagine: You can eat lunch while cooling your feet in the soft water rolling over the stones.

My story: At one of the restaurants, the server advised us on how to get to the base and prepare for the hike. He recommended a guide — a sweet, 20something local, who was so patient and reveled in showing newcomers his beautiful mountain. The most astounding thing about this hike was that every ten meters or so, we'd run into yet another place where someone had carried up chairs, tables, or couches for sitting and relaxing in the shade. Fresh-squeezed orange juice and other cold soft drinks were served everywhere. I am convinced that we need to take a lesson from Moroccans on this one. Enjoy the whole trip; there is no hurry to get to the top.

The tipping customs in Morocco are similar to those in France. (Everyone is used to catering to Europeans.) Gratuity is almost always included, but adding ten percent is a nice gesture that shows that you liked the service. You are not obliged to tip taxi drivers, but it's a good idea to round up the change. Spring for 10 or 15 MAD for an unofficial guide if you are lost, but be sure to agree upon a number in advance. The guide won't ask for the money upfront, and you shouldn't give it to him/her if he does.

On a general note, being gracious, grateful, and smiley will get you just about anywhere.

Rock-a-bye Kasbah: Morocco with the Kids
The Fine Art of Haggling at the Souk
LA Designer Flocks to Marrakech