When Fathom editor Berit flew from New York City to Orange County yesterday, the weather decided to get in the way. Hello, Dallas.

I've spent a lot of time on planes and consider myself to have traveling down to an art; however, despite diligent planning and my best efforts for a smooth day of travel, yesterday nearly turned into a disaster.

7:30 a.m. - Wake up, shower, put on pre-selected clothes, eat breakfast, check-in online, and ensure apartment wont blow up while away.

11:20 p.m. - Board flight to Dallas, do last read of emails. Scoff at message from mother asking if I'll make my connection. She thinks I'm cutting it close. I don't

2:15 p.m. - Plane starts to descend, pilot comes over intercom. "Folks, it seems there are a few tornadoes hitting Dallas at the moment and the airport has shut down indefinitely. They've asked that we staying in a holding pattern for four hours, but we don't have enough fuel, so we're being redirected to Tulsa." Probably won’t be making my connection…

2:45 p.m. - Deboard, confidently advise elderly couple next to me to call American as soon as we get off to book alternative flight out of Tulsa.

2:50 p.m. - Talk to customer service, get annoyed that every flight from Tulsa to Southern California requires a layover in Dallas, book late flight to Orange County. No one knows what is going on. According to news reports, the air tower in Dallas has been evacuated and semi trucks are flying in the air. 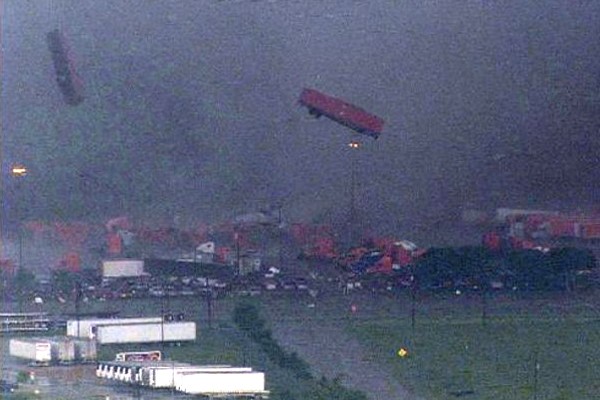 Trailers thrown in the air by yesteday's tornado in Texas. Photo: Courtesy WFAA.

3:00 p.m. - Learn via Twitter that American has canceled all flights out of Dallas. Come to grips with the fact that I may be spending the night. Reference Fathom Travel Hell article for tips on staying calm. Call American Airlines and hold for 45 minutes.

3:45 p.m. - Hesitantly reboard flight to Dallas, where we're told travel arrangements will be sorted. Why are they sending us on a plane to an airport that just nearly missed being struck by a tornado and has no outbound flights?

4 p.m. - Experience extreme turbulence, question myself for getting on plane, listen to kids behind me continually shout out weeeee! — like we're on a roller coaster.

5 p.m. - Land in Dallas, get in line for help desk, call American. Hear faint rumors about three flights going out. Two to LAX and one to San Diego — all driving distance to my destination.

5:20 p.m. - Learn over the phone that I've been booked for the next flight to Orange County — at 8:30 a.m. tomorrow morning. Nearly get out of line to sulk and make calls, but decide to stay and hear what gate agent has to say.

6:40 p.m. - Finally get to front of line, confirm tomorrow morning flight. Sigh in defeat, then remember LAX and San Diego rumors. Ask about standby. After lengthy silence and a lot of tapping, desk attendant confirms I can get on the list for the 7:20 p.m. LAX bound flight. Since I just hit gold status with American I can jump 50 people to #4 slot.

7:15 p.m. - Hear name called and heave a huge sigh of relief. I wont be spending the night at the airport after all.